NOW THAT'S A SPLASH PAGE: McFarlane's Spawn Looks Like One O' Them Youngbloods

Splash pages, you gotta love 'em. A blank canvas where the artist can hit you with a large dose of illustrated 'wow'. This week, I wanted to trip back to the earliest days of Spawn and capture Todd McFarlane's creation in all his massive cape swirling, chain-wielding best. And I have. 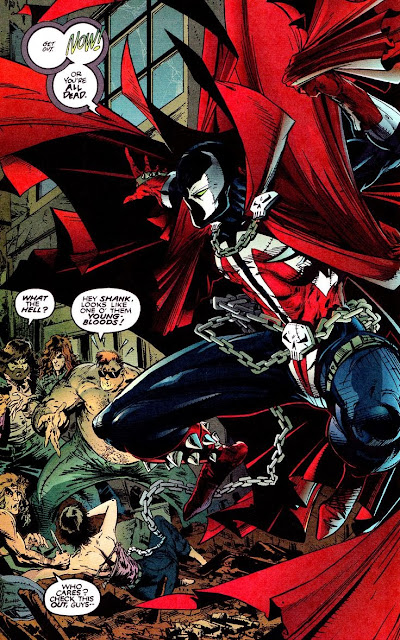 Some fault the early Image days for being splash-page centric, but when they are as massive and detailed as this, even decades on, I think they can be excused. If this was preview art for tomorrow's issue, it would still have people lining up in droves!

With Todd leaving Spider-Man's crazy webs to join Image, you knew something windblown was going to mark his creation, but I'd never have guessed a cape - or at least one as wild as Spawn's. Having a life of it's own, it became a character unto itself and even more so when Spawn finally got animated and hit Hollywood.

While others started drawing capes with equal overkill, without the supernatural to base them from, they just added to another 90's fad, while Spawn's continued to rise above.

What do you think?  For more great splash pages, click here.
Posted by IADW at 7:07 am