ON THE FIVE: Interviewing Mike Grell

When DC Comics saluted its amazing history pre-DC52 by returning icon creatives to icon characters, one artist more than any other showed they still had what it took to foot it with today's best; Mike Grell. Teaming with writer Denny O'Neil, DC Retroactive Green Lantern had just one fault - it wasn't an ongoing.

The writer / artist has worked on both Tarzan and James Bond, his Green Arrow: The Longbow Hunters redefined both its title star and Black Canary, and his creator-owned Jon Sable comic helped turn comics towards both creator-owned comics, as well as the grim n' gritty style of the late 80's. Not bad for a man who originally wanted to be a lumberjack, like his Dad.

When I approached Mike to take part in On The Five, he kindly agreed. Before I got into the questions, I enquired on the legend's health, after Mike Grell was hospitalised in August late last year. Here is his response;


Mike Grell (MG): I’m feeling much better, thanks. A bit surprised at how quickly I got out of shape and how slow it is to get back into fighting form. Apparently that’s what happens when your odometer clicks over into the AARP range.

IADW) Despite being influenced by Neal Adams, you revamped his Green Arrow. Trick arrows and Erril Flynn costume - both gone. You humanised the character even more than Denny O'Neil did - the best writer in comics!

Now the Arrow TV series is trekking a similar path, taking hits from your work such as it's darker 'Emerald Archer', right down to not calling the character 'Green Arrow' which was a staple of your run.

As you've supplied 'police sketches' for use in the show, how does it feel to have a character you are so closely associated with, and in your way, now made a global household name?

M.G.) It’s a kick in the pants. It’s rewarding to know all the effort that went into re-creating the character wasn't wasted and gratifying to know that my work has had a lasting impact.

When they used the name “Judge Grell” in the series as a minor tribute, suddenly, after 40 years, my family now think I'm famous.

IADW) You are one of a handful of creators who can say they worked on Superboy and The Legion of Super-Heroes when it was the top dog in sales at the DC Comics. As a hardened fan eternally waiting for audiences to (re)discover what a thoroughbred concept the Legion is, I have to ask what is it you feel are key traits of a successful and accessible Legion? Does the Legion have to look like a legion on the page? 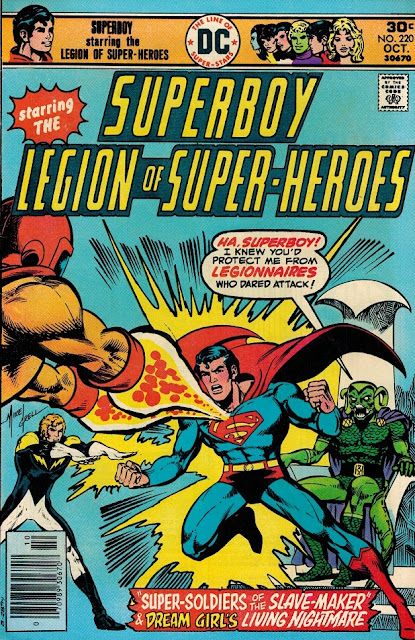 M.G.) The Legion of Super-Heroes has the most loyal fans in the industry. I still have folks bringing me old books, telling me it’s their favorite or that it was the first comic they ever bought. And that’s the reason for the popularity - it’s a great entry-level book to engage new readers.

It appeals to young people because it’s about young people. And, face it, you're always going to have a soft spot in your heart for the first book that caught your eye.

“Legion”, by definition, sort of implies a large group, so I think the answer is “yes” - but - it doesn't mean you have to draw every single member in every issue. I think it would be better as a rotating cast, more ensemble, so you can keep it fresh... And maybe kill off a character or two to keep it interesting. (Some folks still haven't forgiven me for Invisible Kid)!

IADW) With the likes of Jon Sable, Bar Sinister and Shaman's Tears, you are literally one of the trail-blazers for establishing todays creator-owned comics industry. With Image owning every spot in last year's top selling graphic novels list, the year's top-selling comic, and having just announced even more 'Big Two' creators to join its ranks in 2014, what are your thoughts on how the genre has grown - and will we see more from you in 2014?

M.G.) Having taken the gamble that I knew would lead to creator ownership, royalties and more security for comic creators, I'm very proud to have been part of the first wave.

We didn’t know if there would be landmines waiting for us, but we were willing to take the chance. You can make that part of my obituary.

I have several projects on tap for 2014, including a novel, a screenplay and another graphic novel. Stay tuned.

IADW) Speaking of Shaman's Tears, I used to cut every ad of that series out of Advance Comics to use as posters. From that era, do you think the once-planned Shaman's Tears / Turok Dinosaur Hunter crossover will ever see print?

M.G.) Not a chance. That deal fell apart on a corporate level.

IADW) As the artist whose daily output was once a mammoth 3 - 5 pages, do you have any words of advice for creators of the next generation looking to get into the ring, and is there one particular newbie in comics now who has caught your eye?

M.G.) Learn to draw, paint and use Photoshop. Stay on top of new developments and ahead of trends - lead, don't follow. And for God’s sake, learn to tell a story. Pretty pictures aren't enough. Study Will Eisner.

I have to thank Mike for allowing this interview and being so open in his responses. From Warlord to Green Arrow, it must be amazing to be able to say that you trailblazed so many different events and styles in comics, and as a fan and interviewer, I am very lucky Mike chose to reflect on that career with me. I wish him all the best, and look forward to whatever lies ahead from his talented pen.

What do you think?  Let me know your thoughts below! For all things Mike Grell, be sure to visit mikegrell.com For more On The Five interviews with the likes of Norm Breyfogle, Dan Jurgens and Bob Layton, click here.
Posted by IADW at 4:00 am