PANEL BEATER: My Comic Of The Month - Eternal Warrior #4

It's a sign of cowardice to take a gun to a knife fight, but turn the knife into an army of swords, spears and other primal weapons, and the gun into Gilad and his equally eternal (only more bloodthirsty) daughter Xaran packing rocket-launchers, and you not only have one hell of an explosive scene, you have a series that month after month has smoked it's comic competition, leaving their pages swirling as if in a giant mushroom cloud.

That comic is Valiant's Eternal Warrior, and best of all, it's only up to issue #4. 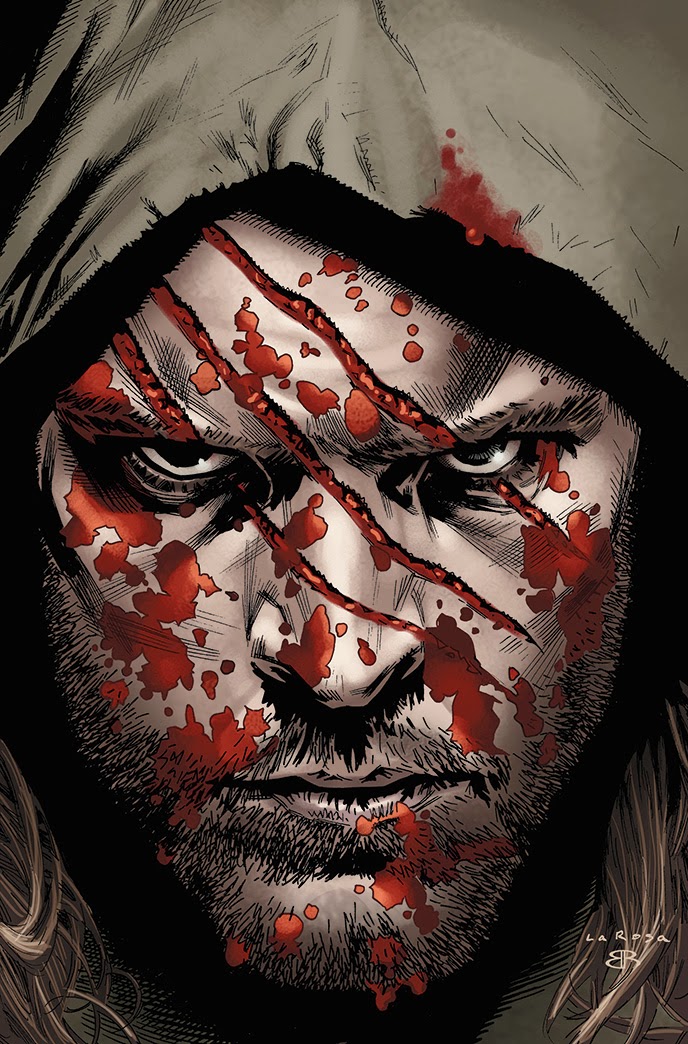 What writer Greg Pak has established in a mini-series amount of time is astounding - but time is nothing to this title or it's star. Gilad has ceased fighting for the House of Earth. 6000 years in the rearview mirror, his pacifist son Mitu was murdered at his sister's hand. After trying to shake the decimation of his nuclear family in centuries of war, Gilad accepted the advice of the Geomancer and laid down his sword. Now at peace in the isolation of today's wilderness, his daughter shows up at his door, still alive, still lethal and looking for aid.

The news of his daughter being used as a war toy between Houses, is nothing to the revaluation his son has been reborn, only to spend the last few thousand years as the right-handman to Nergal, God of Darkness and foe to all. The last straw now pulled and doused with kerosene, Gilad sets out for revenge on the heartbreak beset upon his family and the manipulation of all mankind. His plan: burn all Houses to the ground - starting with his old frat buddies, the House of Earth.

As the manipulations and plot twists unfurl, it's this twisted three person family tree that puts the meat on the bones of this series. Reflecting on Mitu's humanitarian ways as he 'interrogates' the current Geomancer, you feel Gilad's pain, and the sadness of his bloodthirsty daughter - realising she's still second to her softer sibling, be he dead or alive.

Also eternally divided is the book's artistic team, albeit for a greater result. With one artist tasked with detailing the ravages of the past, while the other reveals in the schematics of the present, Trevor Hairsine and Diego Bernard keep pace. Throughout all, Gilad looks like a warrior honed through the ages, in both size and scars, and his daughter Xaran lands more on the darker side of anti-hero every time she steps into the light.

With Alejandro Sicat and Vicente Cifuentes splitting inking roles in similar fashion you know not many teams could make a man being thrown into a natural bolt of lighting seem legit and wicked, but this one can and does.

As Gilad turns to burn the Goddess of Earth with her tree, the deity reveals it is her roots holding Nergal imprisoned underground. While I won't give away if Gilad continues to detonate his explosives, what follows perfectly opens up the next arc for new readers - set in the age of Rai.

The basics of good comics are eternal, good comics themselves, sadly not always so. Luckily Eternal Warrior sure is a title worth living for.
Posted by IADW at 11:35 pm