ROLL-CALL: The Top 10 OTHER Super-Hero Teams In Comics

By combining many of their biggest sellers into one comic, DC's Justice League of America kicked off the most popular gig in the industry - the team title. With so many great squads throughout comics, it's surprising Top 10 lists always get stuck showcasing the same old crews. The next row back are more diverse in concept if not better!

10) THE RENEGADES  (Valiant) Move aside GEN13. These gifted teens / 'Harbinger's' on the run, face an opposition more relentless than most; their former captor / 'ultimate Harbinger' Toyo Harada. To have a shot at life, the Renegades find freedom blocked by an army of Harbingers still under Toyo's control - and a whole world of hurt.

8) RUNAWAYS  (Marvel) Discovering their parents are super-criminals, these teens abandoned codenames and spandex cliches to turn against their 'caregivers' and save L.A. Armed with their parents own gadgets and a dinosaur, the newfound family now ensure other rogues reject following in their parents footsteps, just like they did.

7) WATCHMEN  (DC) Now sure, technically the cast of marvelous mini-series Watchmen, were thin covers over Chalton Comics' Sentinels of Justice, but the dynamics of the crew didn't get turned from 10 to 31 until Dr Manhattan and Silk Spectre talked on the moon. The most amazing thing about this landmark series? In just twelve issues, the entire creative team introduce us to new faces and fleshed out their pasts, hates and affections, leaving them feeling more known to us, then casts of teams who have had twelve issues every year for decades.

Who Makes The Top Six?  Click through to the next page and see, right here.

6) GUARDIANS OF THE GALAXY  (Marvel) Mickey Mouse hopped on a Steamboat and the world clapped, when Rocket Raccoon steps on a spaceship evil the galaxy over changes its pants. Not only is the foul mouthed mammal a force to be reckoned with, he comes with the ultimate rag-tag team of Han Solos the cosmos has ever had. And with every step they take, the fate of at least one universe falls in their lap.

5) THE LEAGUE OF EXTRAORDINARY GENTLEMEN  (Wildstorm) As a kid I always wanted to see The Thing fight Dr. Jekyll's Mr Hyde - the Victorian horror himself not Hulk or Marvel's Hyde - there is a difference. The L.E.G. proved that by forming a 'Justice League' of cult literary classics, such as Mina Harker, Captain Nemo and The Invisible Man, and setting them against the War of The Worlds.

4) PLANETARY  (Wildstorm) If League of Extraordinary Gentlemen gathered classics to become a classic, Planetary did it better by having 'archaeologists of the impossible' explore icons to become iconic. Aiming to discover the planet's secret history, and funded by the Fourth Man, Elijah Snow, The Drummer and Jakita Wagner explored alternate reality nods to Tarzan, Doc Savage, Green Lantern and The Fantastic Four among others.

3) WILDC.A.T.S  (Wildstorm) A lady cyborg with attitude, an alien warrior commander, the best gunman ever and the top alien menace in comics are just a few parts of what makes this team tick. 'Mr Majestic' Jim Lee's first crack at a creator-owned title plants it's Maul sized feet in this chart, leaving footprints all over alien Daemonite skin.

2) DOOM PATROL  (DC) As much as Fantastic Four was a base for The Incredibles, so to was The Doom Patrol a foundation it seems for Dreamworks' Monsters vs Aliens. The original alienated freaks, Robotman, Negative Man and Elasti-Girl battle the strangest and most bizarre adversaries on the planet and beyond, from transvestite living streets to the Brotherhood of Evil and even plans of their founder Doctor Niles Caulder. 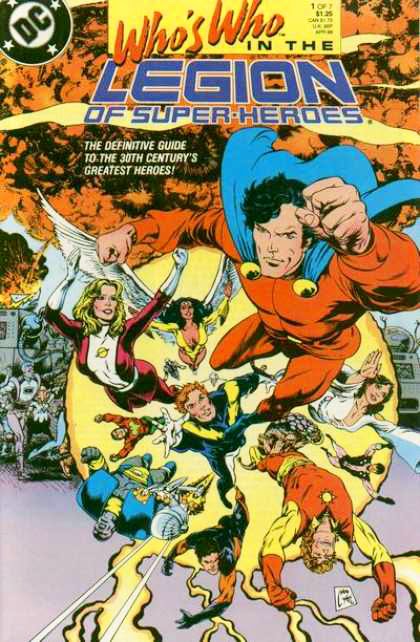 It's the future's highest honour to be given a Legion flight ring, and done right, it's a privilege in the present day to read their adventures too.

Set against the backdrop of the universe of 31st century DC, there is no epic too big for the adventures of the Legion of Super-Heroes. A galactic U.N. of sorts, featuring the best young heroes the cosmos has to offer, the inter-planetary conflicts they find themselves embroiled in are only part of the big changes and character drama the team consistently faces.

Motivated and inspired by the legend of Superman, Legionnaires such as Mon-El, Timberwolf, Dawnstar, and Cosmic Boy all know the definition of what it means to be a hero and set out to show the rest of the universe exactly what that means.
What do you think?  Ruling out the usual Top 10 listed at the start of this article, who would make up your 'Top 10 OTHER Super-Hero Teams In Comics?
Posted by IADW at 6:00 am