SWEET AS: The Best From DC Comics' April 2014 Solicitations

When we Kiwis find something we like, we say it's 'Sweet as'. From the final issues of Teen Titans, Stormwatch, Superman Unchained, Suicide Squad, Nightwing, and Justice League of America, to the launch of six new titles including Sinestro #1, when I look at the new releases of DC Comics for April 2014, these make the 'Sweet As' grade: 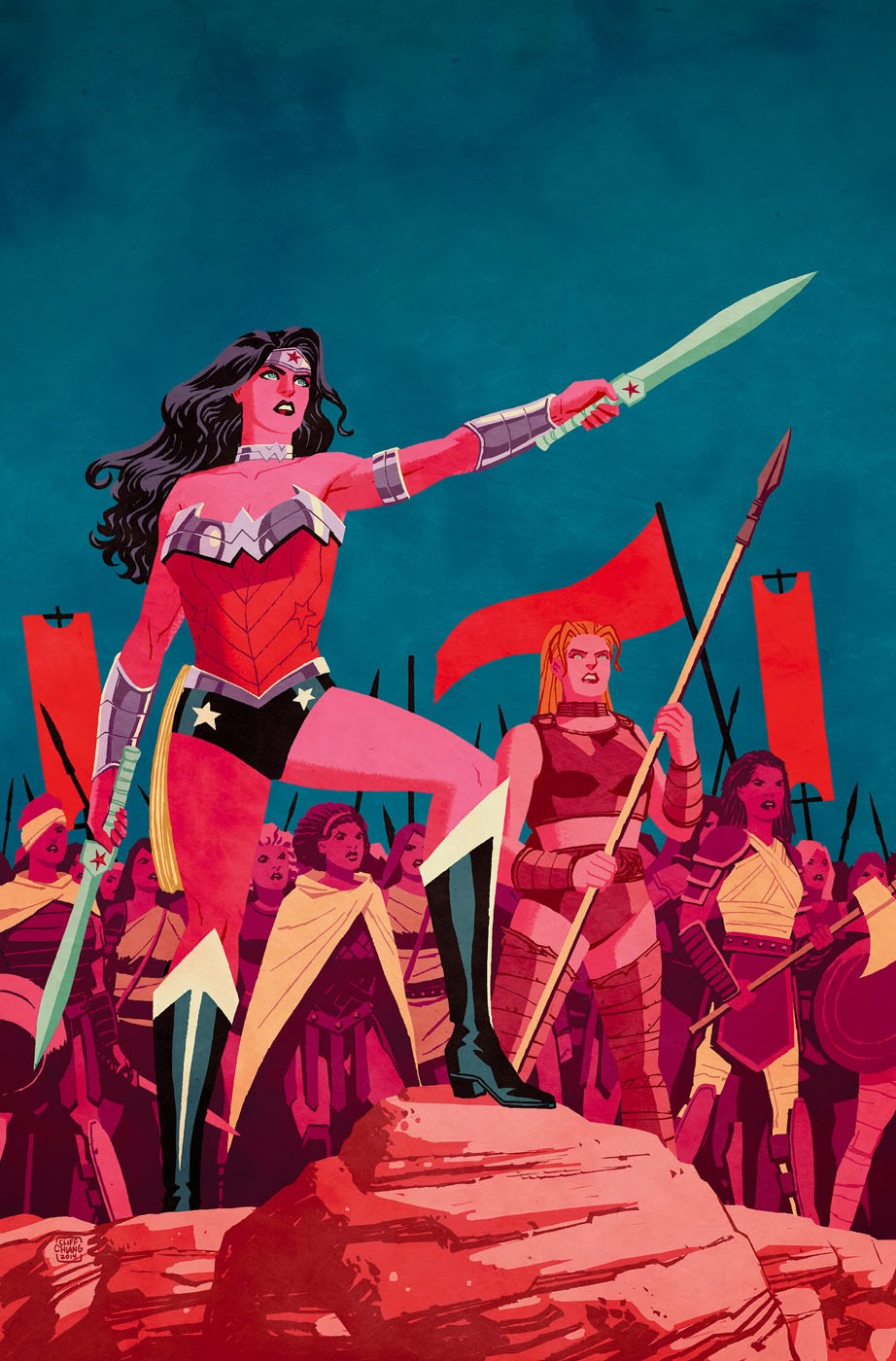 Some covers are so good they should just come with a complimentary frame, and Chiang's art here is definitely a prime example. Wonder Woman leading the Amazons never gets old, strip back the colour palette to a warm cold colour contrast and forget it - this one is going in the history books.

DC says: Wonder Woman, the God of War, takes command of the deadliest army ever! The Amazons are back, and they have some scores to settle... (W) Brian Azzarello (A) Goran Sudzuka

THE SANDMAN: OVERTURE #3 The armies of the night are gathering. The universe is beginning its final dance. Morpheus, far from home, walks the path of madness, accompanied only by himself. (W) Neil Gaiman (A) J.H. Williams III

AMERICAN VAMPIRE: SECOND CYCLE #2 Pearl has made The Preston House a place of peace. But when something comes to threaten that peace, she'll do anything to protect her young strays. (W) Scott Snyder (A) Rafael Albuquerque.

AQUAMAN #30 Centuries ago, he aided Atlantis in a time of great need and suffered great betrayal for his efforts. Now Hercules is back -- but is he bent on revenge, or has he been consumed by madness? (W) Jeff Parker (A) Paul Pelletier and Sean Parsons

ALL-STAR WESTERN #30 Now back in the Old West, Hex finds readjusting to his old life a bit more difficult than he expected -- especially when he finds out that there's a NEW Jonah Hex! Plus: This extra-sized issue features a back-up story drawn by Jose Luis Garcia-Lopez that introduces Madam 44 to The New 52! (W) Justin Gray and Jimmy Palmiotti (A) Staz Johnson, Jose Luis Garcia-Lopez 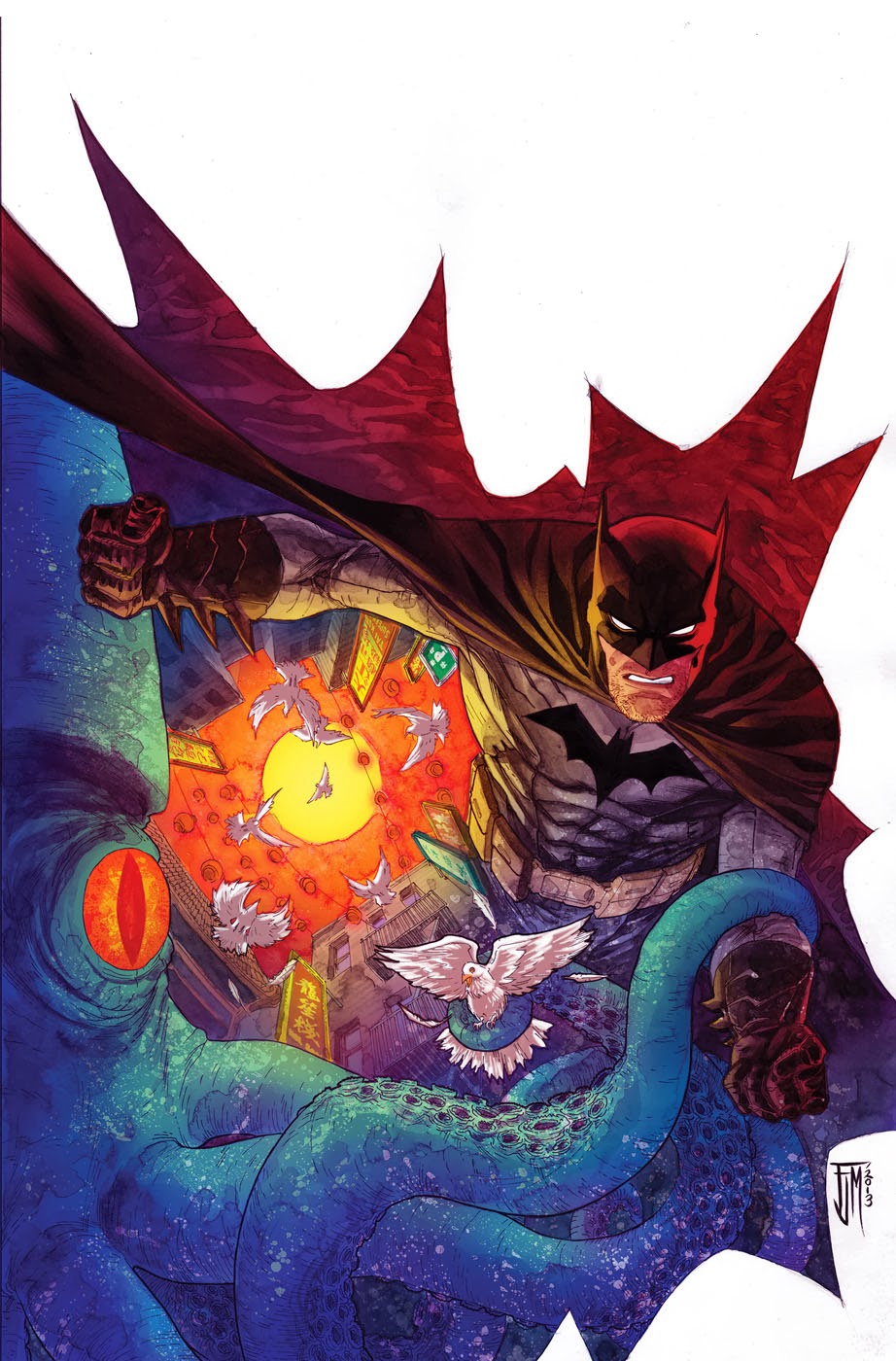 SOUNDS LIKE AWESOME
BATGIRL #30 An ordinary day takes a turn for the worse when Barbara Gordon must find a way to save her roommate Alysia Yeoh from fan-favorite villain Ragdoll! Ragdoll written by Gail once more! (W) Gail Simone (A) Fernando Pasarin and Jonathan Glapion

SINESTRO #1 Thaal Sinestro has lost everything he's ever loved: his home, his family, his only friend. But no matter how desperate he becomes, Sinestro will never be without fear...a lesson his one-time ally, one-time enemy Lyssa Drak is eager to teach him! Can he take back the despicable Yellow Lantern Corps? Or does the universe have a new destiny in mind for Sinestro? (W) Cullen Bunn (A) Dale Eaglesham

SECRET ORIGINS #1 At last, the Secret Origins of the World's Greatest Heroes in The New 52 can be revealed! This series starts with The Last Son of Krypton and Supergirl, plus the first Robin, Dick Grayson. 48 pages. (W) Tony Bedard, Kyle Higgins and Greg Pak (A) Paulo Siqueira, Will Conrad and others 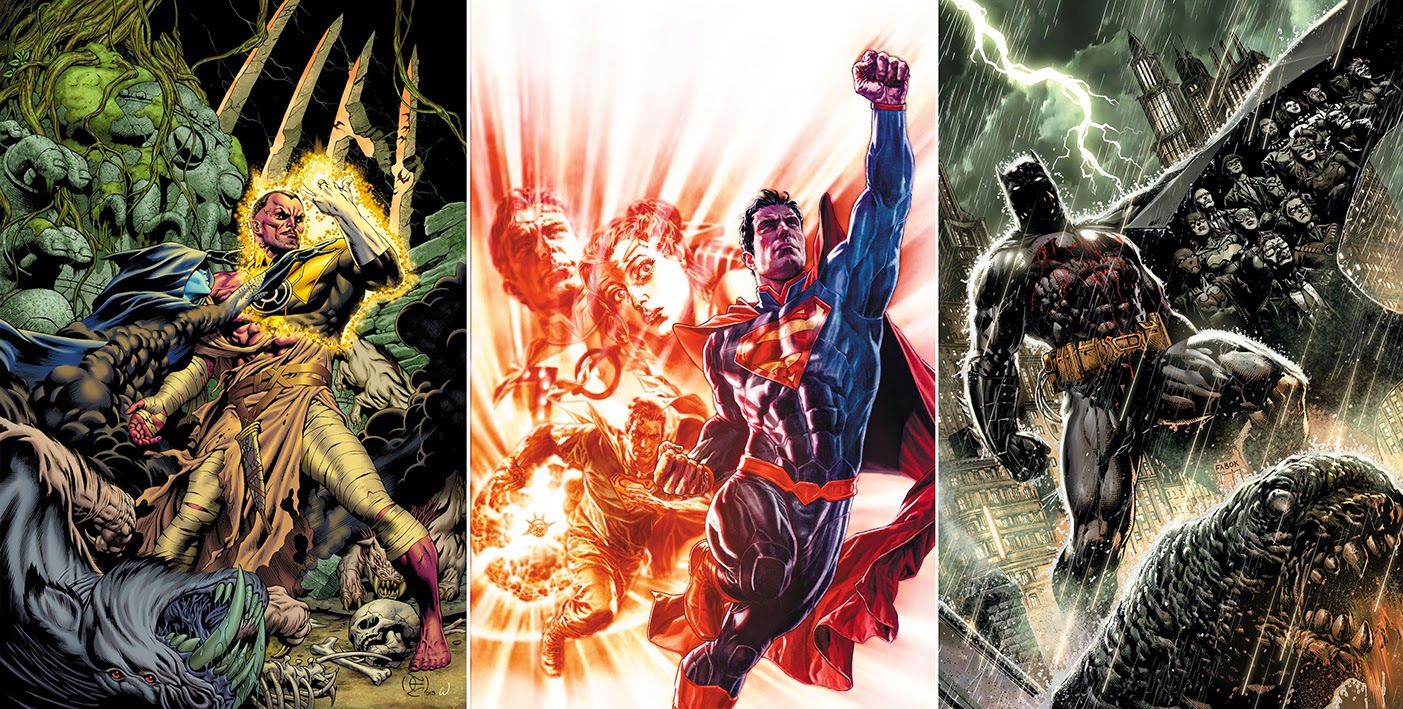 BATMAN ETERNAL #1 The start of the Bat-story so big it's going to take every week of the month to tell! A massive cast of Gotham City's best (and worst) examines the relationship between Batman, his allies and his city. Plus, Commissioner James Gordon is caught on the wrong side of the law! (W) Scott Snyder, James Tynion IV, John Layman, Ray Fawkes and Tim Seeley (A) Jason Fabok

FOREVER EVIL AFTERMATH: BATMAN VS. BANE #1 The title says it all! Forever Evil is over! Now, Batman has returned to take Gotham City back -- by force! The only thing standing in his way? Bane! 40 pages (W) Peter J. Tomasi (A) Scot Eaton and Jaime Mendoza

AQUAMAN AND THE OTHERS #1 A Futures End prelude! Spinning out of Aquaman, the King of Atlantis and his teammates find themselves targeted by an unknown foe that wants their Atlantean artifacts! (W) Dan Jurgens (A) Lan Medina and Ed Tadeo

JUSTICE LEAGUE UNITED #0 In the aftermath of Forever Evil, Adam Strange is caught up in an adventure across the far reaches of the cosmos that will unite an unexpected team of heroes including Supergirl, Hawkman, Green Arrow, Stargirl, Martian Manhunter and Animal Man. (W) Jeff Lemire (A) Mike McKone

VERTIGO QUARTERLY: CYAN #1 CMYK will defy all conventions of traditional comics anthologies. The unifying color could suggest a mood, a plot point, a coloring technique -- limited only by the imagination of the fantastic creators we've lined up. Starting with Cyan, we have the challenge of telling compelling stories that scream cool "blue."