SWEET AS: The Best From Marvel Comics' April 2014 Solicitations

When we Kiwis find something we like, we say it's 'Sweet as'. From the final issues of Spectacular Spider-Man and the launch of something amazing, to the return of Daimon Hellstrom and more, when I look at the best and new releases from Marvel Comics for April 2014, these make the 'Sweet As' grade: 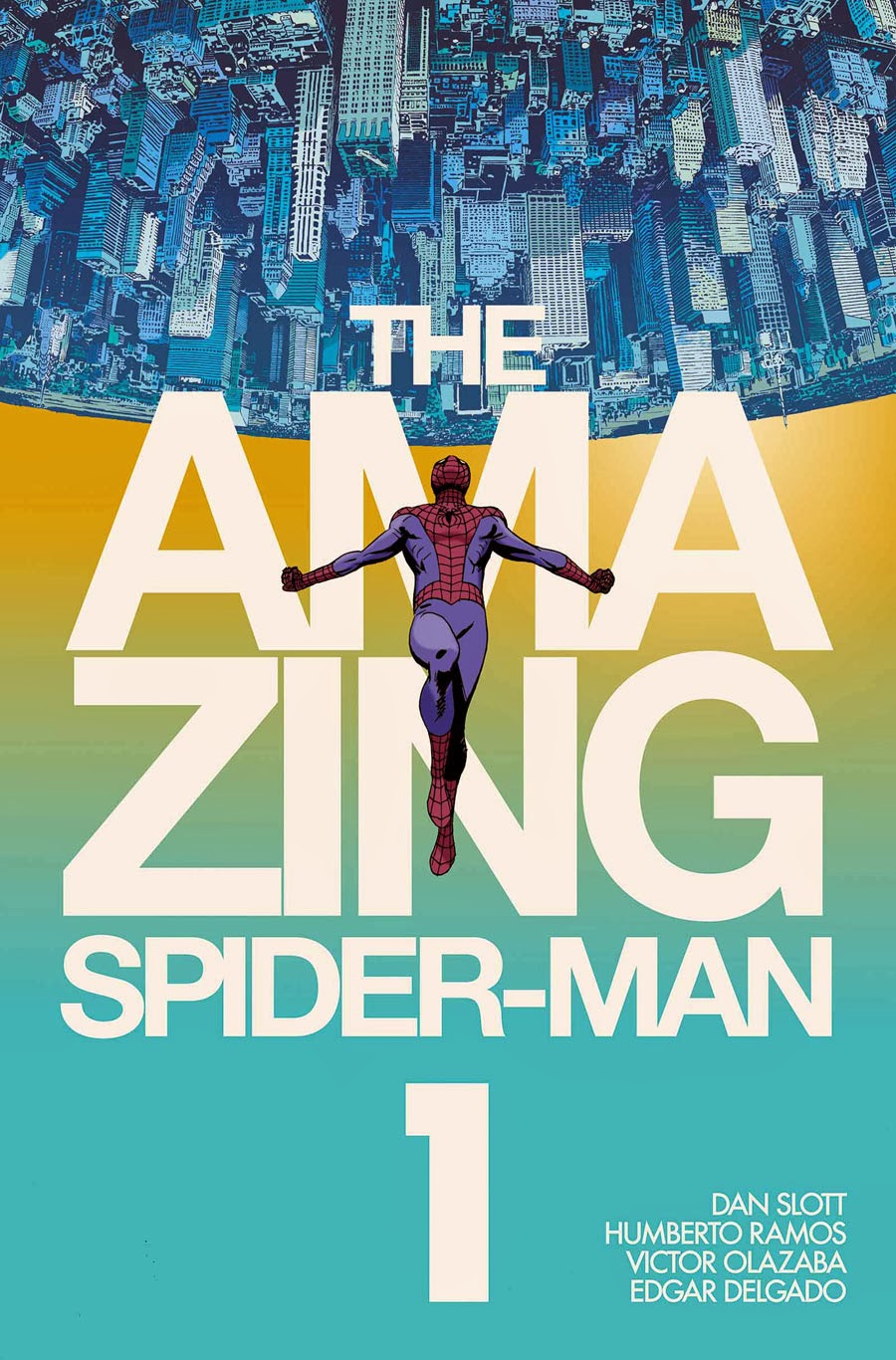 This might be one of the best comic covers I've seen, done outside the classic 'Caption and Kirby' covers of old, and it's great to see Marvel taking a more creator-owned pop feel on the relaunch of their main mascot. If the series continued variations on this logo treatment, like say Saga, what a stunning portfolio it would make.

Marvel says: The greatest super-hero of all time RETURNS! The world may have changed since Spidey’s been gone, but so has Peter Parker. This is a man with a second chance at life, and he’s not wasting a moment of it.

Same Parker luck, new Parker attitude. Putting the “friendly” back in the neighborhood, the “hero” back into “super-hero,” and the “amazing” back into “Spider-Man!” Also returning: A recharged and reenergized Electro! (W) Dan Slott (A) Humberto Ramos

ALL-NEW INVADERS #4 The Invaders incursion into the Kree Homeworld, has begun...and already our heroes are in trouble. As the team battle a Kree-controlled God a dangerous side mission forms that only Winter Soldier and Aarkus The Golden Age Vision can complete! (W) James Robinson (A) Steve Pugh

FANTASTIC FOUR #3 The Fall Of The Fantastic Four part 3. The FF were victorious over an inter-dimensional invasion but at a terrible cost! Is this “Flame Off” forever for the Human Torch? Introducing a new stronger, deadlier version of the Wrecking Crew! (W) James Robinson (A) Leonard Kirk

SILVER SURFER #2 Who is the Never Queen? How is the entire future of the Marvel Universe tied into her very existence? And why is she trying to destroy the Silver Surfer?! Are these questions important? Sure. But you know what’s just as important? Lunch. Because what Earth girl Dawn Greenwood has for lunch today could change the fate of everything! (W) Dan Slott (A) Michael Allred UNDER THE RADAR
AVENGERS UNDERCOVER #2 He's one of Marvel's greatest supernatural characters, and he's a former member of The Defenders to boot! Now as the teen heroes infiltrate the Avengers’ arch nemesis, the Son of Satan steps forward! (W) Dennis Hopeless (A) Kev Walker

THE NEWBIES:   (aside from those named above)


IRON FIST: THE LIVING WEAPON #1 High above the city, in a multi-million dollar penthouse, Danny Rand, a.k.a. Iron Fist, is haunted by the consequences of choosing death over life. A message from Iron Fist’s mystical homeland of K’un-Lun brings Danny back to his blood soaked origin of betrayal and vengeance! (W/A) Kaare Andrews

HULK #1 All-new direction! Banner D.O.A. part 1. Following the events of the Indestructible Hulk finale, Bruce Banner lies at death’s door! If he survives, it WON’T be as the Bruce Banner we've known! How will the Hulk wreak vengeance on Banner’s assailant? (W) Mark Waid (A) Mark Bagley

ORIGINAL SIN #0 The prologue to Marvel's biggest summer event! Who is The Watcher? That’s what Nova is wondering, but what he discovers will prime the pump for the most cataclysmic event in Marvel history! What did he see? (W) Mark Waid (A) Jim Cheung 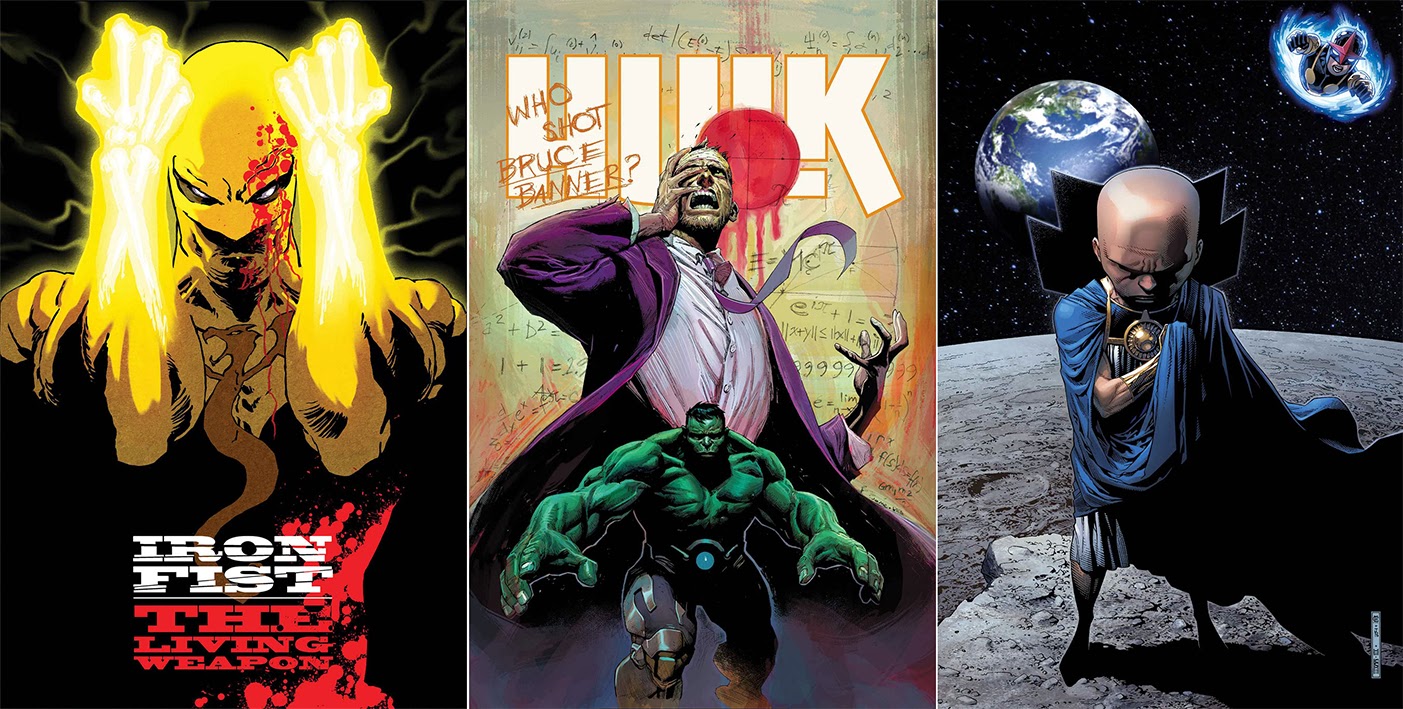 INHUMAN #1 (Resolicitation) The newest super heroes of the Marvel Universe are born! A cloud of Terrigen mist is moving around the world turning regular people into Inhumans with amazing powers. But not everyone thinks this is a good thing. (W) Charles Soule (A) Joe Madureira

ELEKTRA #1 Witness the beautifully violent return of the world’s deadliest assassin. A life spent in silent pain has led Elektra to the precipice of despair. As she prepares to shed her past and take her next step, everything you know about her will change! (W) Haden Blackman (A) Michael Del Mundo

NIGHTCRAWLER #1 Reborn X-Man Kurt Wagner finds himself in a world that’s a far cry from the one he left: Professor Xavier is dead, Cyclops is on the run, and the X-Men are divided. But determined not to let his new lease on life go to waste, Nightcrawler hits the road with Wolverine, eager to right wrongs and safeguard the future mutantkind. (W) Chris Claremont (A) Todd Nauck

ALL-NEW DOOP #1 (of 5) When Doop gets deeply involved in X-Men business (and in the personal life of Kitty Pryde!), he will be thrust into a spotlight that proves Doop is, in fact, the most powerful X-Man! (W) Peter Milligan (A) David Lafuente

WHAT IF: AGE OF ULTRON #1 (of 5) In Age of Ultron, a time-travelling Wolverine killed Hank Pym before he could create the world-conquering Ultron. What would the Marvel Universe look like if another founding Avenger had been killed instead? This issue; The Wasp! (A) Joe Keatinge (A) Raffaele Ienco

ULTIMATE FF #1 The Future Foundation is all that stands between us and complete and utter doom. Sue Storm, Tony Stark, Machine Man and Sam Wilson face the oncoming destruction. (W) Joshua Hale Fialkov (A) Mario Guevara

What do you think?  For the full list of Marvel's April 2014 solicitations, click the jump.
Posted by IADW at 9:47 am