THE HARE AND THE TORTOISE: Amazing Spider-Man 2's New Year Footage vs One Frame Of Guardians Of The Galaxy

Comic book movies are like teenagers vying for attention. Infact if attention was a Bieber doll, you could easily picture Warners, Fox, Sony and Marvel Studios, each with a hand on the thing, pulling and yelling 'Give it to me - it's mine!' 'Get 'yer mitts off!' and other round the Christmas Tree favourites. One studio alone can't have attention, and as soon as one goes for it, the race is instantly on - New Years Eve included. 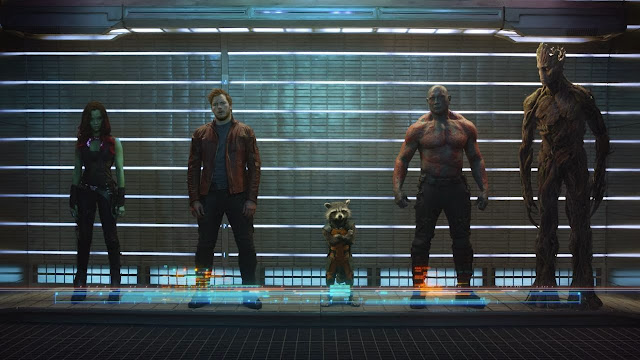 Yeah, that 'Coon is going to blow up big, and not just when he has a gun in his paws! A line-up for law enforcers the Nova Corps, the outcast Guardians of The Galaxy (minus an absent Nebula) is slowly and steadily stepping up the anticipation, towards their August 1st release.

Meanwhile on the opposing side of the track, Sony rapidly flicked a whole lot of frames at eager fans, in a special Times Square set trailer, showing off more Rhino, Electro and Spidey footage for The Amazing Spider-Man 2. Like the classic comics of Marvel's main man, it even started with a Stan Lee intro;

Talk about your wiley rabbit's - that man's optimism and excitement could sell anything! Spider-Man has also appeared on Good Morning America, and been named named “The Official Hero of Times Square 2014.” For me, the hero of our block is ol' Rex McGinty three doors down. He drank five litres of Pepsi Max chased by a roll of Mentos and nothing happened. Sure, he hasn't opened his mouth since and every now and then you hear what sounds like a demon inside him, but boy, what a role model.