THE HARLEY GOES IN THE GARAGE! The Joker LEGO Funhouse That Actually Animates 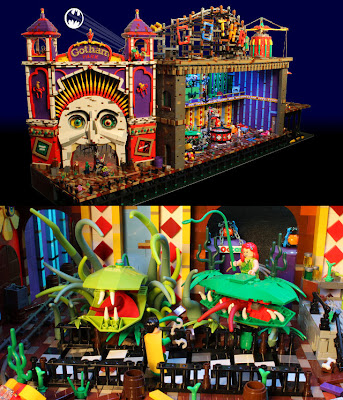 Everytime I post on IADW about what creative people are doing with LEGO, I feel like a buttmuch for rarely deviating from the design on the packet. Now I get where 'thinking outside the box' comes from.

The latest candidate to make me feel like putting my head in the sand is Paul Heatherington, whose Joker's Funhouse not only takes the look of Melbourne's Luna Park to new heights with all the classic Bat-rouges from Two-Face to Catwoman, it is fully animated.

Discovered on i09, Poison Ivy's plants chomp, Riddler's machine cracks codes and Harley Quinn dips the Commissioner in a vat of imitation hydrochloric. Plus a zillion and ten other moving bits and pieces.

Think I'm lying? Think it's only a zillion and nine? Check out this vid;

Anyone else get reminded of Child's Play by some of those characters? Me neither. Now while Paul polishes the Brick Con 'Best In Show' trophy this Funhouse won him, and you re-watch the video above that never gets old, I'm going to go hide behind the couch and count to ten. Maybe thirty.