For the month of January my $3.99 haul looks like this;

DC COMICS PRESENTS #31 If there's one comic I loved and miss in equal portions to The Brave and The Bold, it is Superman's version of the infamous Batman gig; DC Comics Presents. And being completely honest, I've been after this cover for years. I mean it's Robin getting a Kryptonian piggy-back - how can you turn away from this stuff?!

The craziness continues on the inside, as Dick Grayson breaks into a circus at night in order to find out why a performer he grew up with him snubbed him in broad daylight. Busted by Half-and-Half, a strong person who is literally half man and half woman, plus a squad of mind controlled circus stars, including one familiar super-man, Robin must save his friend and Kal-El without becoming the third ring attraction himself.

'Check, chum' and 'Looney bin' take you back to an age where comics were a bit lighter and fun then many take themselves today. What keeps the plot suspenseful, despite the casual cheese and elephant-lifting is the creative team. In every spot lies a legend; Ross Andru and Dick Giordano supply the cover, Gerry Conway writes, and on the interior art Giordano returns with DC's 'Kirby' José Luis García-López! Who doesn't want to see Lopez's Robin?

Throw in a back-up on the fate of the original Robotman (not the one from Doom Patrol), and forget it - this is a done-in-one issue that doesn't clown around. 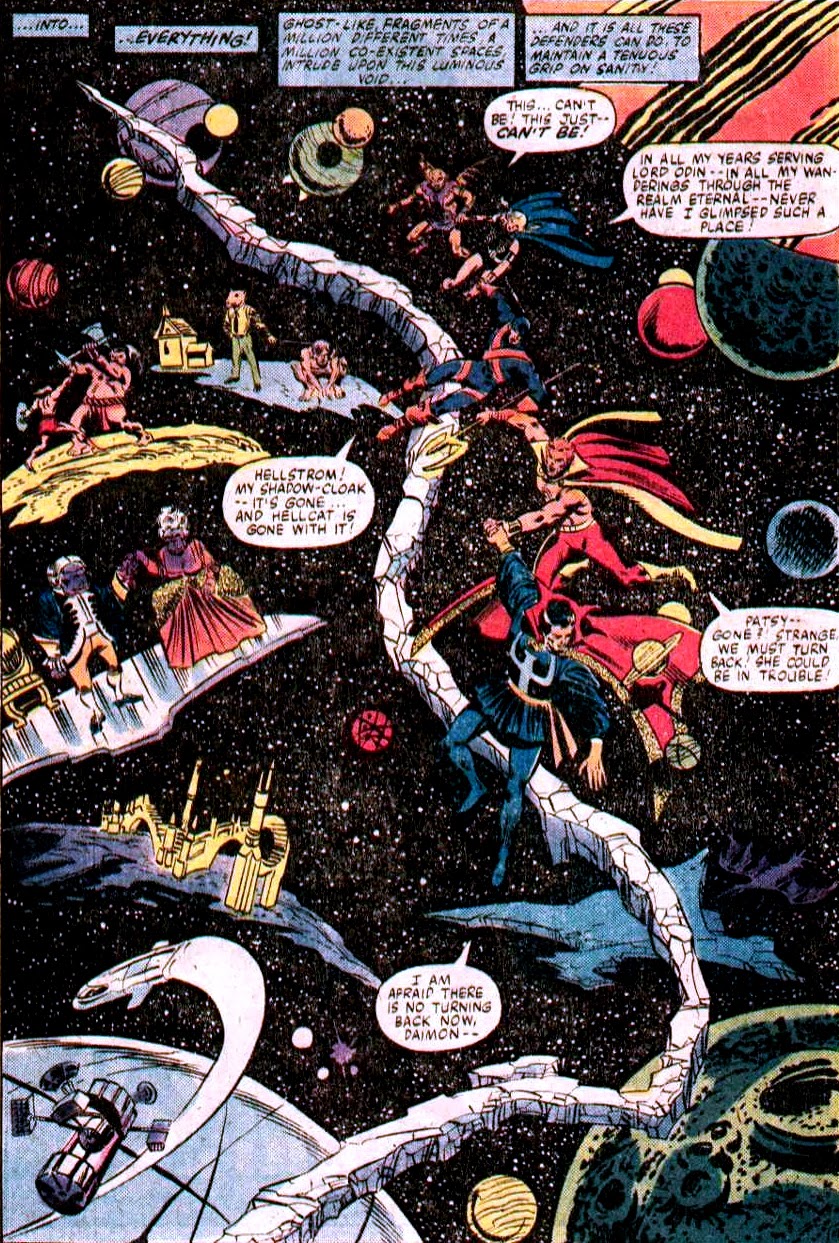 THE DEFENDERS #96-98 When I was too young to know better, I put the majority of my comics in the trash. While I brought these three issues as much for the sweet Michael Golden Ghost Rider cover to #96 as I did for just plain digging The Defenders, it wasn't 'till I read issues 97 and 98 I realised I'd just bought two copies of those ditched comics back.

The three issues continue The Six Fingered Hand storyline. While Doctor Strange, Gargoyle and co traipsing the globe to tackle the demons that oppose them is a little drawn out in issue 96, the Rider keeps things ticking. Throw in Devil-Slayer, Man-Thing and the Avengers (inc future Defender Beast) and by issue 98, that tick is working overtime.

While the splash page trip through dimensions on the left is still as cool now as it ever was, this time around age allowed me to add understanding to my 'wow' of the tale's supernatural and surreal. From Dr Strange's duel inside Man-Thing's body to Hellstrom and Nighthawk's beef with the faith healer, age helped things feel fresh (hey, getting older does have an advantage)! Especially Hellcat's slide into insanity, originally put down to 'being a weird girl' as a kid, is now dramatic and cool.

Written by J.M. DeMatteis, drawn by Don Perlin and Joe Sinnott, these three issues are enough to make me a Defenders fan all over again.

Trading Post Rating: Hellstrom and Doc are as magical as ever, just some parts need a little more spark. *****