If you think the Scarlet Witch once believing she had given birth to babies from an Android daddy is a little weird, that's got nothing on the real world. This place is full of bizarre! Let's look at Indianapolis, where the Monday night meat market is a race all of it's own. 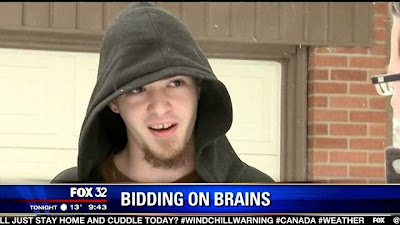 On the night of December 16th 2013, David Charles was caught selling the Doom Patrol rogue The Brain, in the carpark of a local Dairy Queen. Okay, I lie, it wasn't The Brain, Krang from the Ninja Turtles or even that Brainiape from Savage Dragon with the cerebrum of Adolf Hitler in a Gorilla's body. It was just plain ol' human Brain that two-first-name David Charles had previously stolen from the Indiana Medical History Museum - brains that once belonged to the former psychiatric treatment center's patients.

While someone should have told Charles, 48 jars of brain in a duffle bag isn't what people mean about selling pickles and preserves in a car boot sale, the twenty-one year old wasn't the only bright spark in this investigation. The police team's informant claims he brought six jars of brains off Charles online for $600 plus shipping. How are police not bothered by this guy - he was searching 'BRAINS FOR SALE' on eBay.

Labels: brains for sale, David Charles, dont sell what you havent got, look mum im on tv, the news told me to stay home and cuddle, WEIRDNESS FROM THE REAL WORLD