WILL YOU BE MY WONDER WOMAN: The Ring Themed After DC's Premiere Heroine

Wonder Woman was taught to fight in an arena of amazon warriors, on an island of amazons. While that means she can jump, chop, punch and kick with the best of them, there's always one move that as a fan gets me clapping; the tiara toss. Be you Darkseid or Silver Swan, when that headband is coming off, your ass is grass. 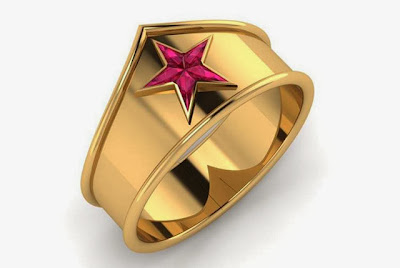 Taking the Avenging Amazon's often overlooked weapon as inspiration, Paul Michael Design have fashioned this Wonder Woman ring, designed for slightly more positive moments than end of the world confrontations, if not just as a new hat for your favourite Barbie.

Featuring five custom cut rubies, the ring itself comes in five different materials, ranging from the platinum at $15,711.07 (because seven cents counts when it's already over 15k), to the yellow gold ($1996.75) to the more bullets and bracelets friendly silver ring at $744.87.

While other pop-culture hits Paul has jeweler-ised include R2D2, Boba Fett, Black Widow and (cough) Pokemon, if your partner is a fan of a Diana from any Crisis, this ring can truly bring a touch of Paradise Island to your relationship. Just don't expect it to act like a lasso of truth.