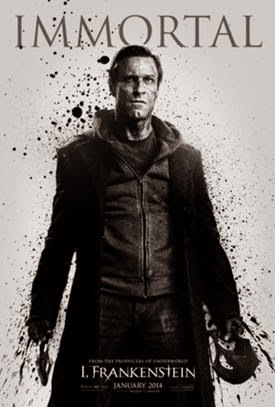 "You're only a monster if you behave like one."

On Rotten Tomatoes, this film scores so low, it's as if Dr Frankenstein submitted his monster to Project Runway instead of the action movie masses. Based on a comic by Kevin Grevioux, a creator of the Underworld movies, I found I, Frankenstein offered a unique twist on the monsters' situation, by making him the ultimate piece in a war between Heaven and Hell - and seeing on which side a soulless man can fall.

What makes Frankenstein's monster such a prized possession to both the angelic and the demonic armies is not so much his unrivalled strength or stamina, it is the fact he proves new life is no longer dependant on God, and all the repercussions such a truth can spell.

Sadly, shifting the focus from exploring where this status places 'Adam' (the name the monster is given after his first run in with leader of the gargoyles, Leonore (Miranda Otto) and also the name of the monster in Mary Shelley's original novel), to the surviving journal of his mad creator, robs the character of the depth which could've truly separated him and this film from it's action kin.

Rather than threatening to tear apart Adam to gain his secrets, the demons hunt the diary of his creation. With it, they aim to create an army of soulless bodies for their damned to inhabit, finally giving them numbers to vanquish their granite faced holier-than-thou opposition. Only in trying to prevent their plans, Adam realises even the angelic gargoyles are playing him for chumps, and begins to formulate a plan of his own.

A film touching the Biblical can easily get weighed down in needless context and explanation. Thankfully moves like casting its angels as concrete gargoyles, rather than their cupid featherbound cliches, helps this beast avoid that pitfall. Seeing these guys fill the sky really does install the fear of God in you!

Adding to the marvels of modern FX, there are plenty of bone-crunching battle sequences to escape into. Frankenstein's 'punch a flying gargoyle in the face' the chief among them. His 'un-wieldable' kali sticks break bones in ways Nightwing's never could!

Also tying into Gotham City, actor Aaron Eckhart ranted as Two-Face in The Dark Knight, but here his gravelly tone brings the perfect weight and gruff to the title role. Never relenting in his approach, Aaron gives action films a whole new star in the process. While Adam suits the look of his Highlander-esque origin scenes more than his latter metrosexual appearance, the film opens doors to both a sequel and hopefully more heavy-hitting epics for Aaron to explore. Just thinking of Eckhart's voice behind a Judge Dredd mask for example gets me excited.

Unfortunately, while the scale of what opposes Adam may seem his equal, his acting opposition never does. Arch-rival, Naberius (played by Bill Nighy of Underworld fame), isn't that sinister in his delivery. Heck, even Bill's Davy Jones in Pirates of The Caribbean was more menacing!

Like Riddick, Whoopi Goldberg movies or Child's Play, a non-five star rating isn't a death knoll for a film that would easily tell the teacher 'I wasn't tryin''. It's just the kind of easy-going plot you want to relax to at the end of a rough week. Is it a monster? In some parts yes. Would you be a mad scientist for loving it? Certainly not.