Making A Mark gives an insanely talented artist some IADW brag-space. Today goes digital artist Jason Oakes. He's the Texan proving that comic heroes being clad in primary colours isn't necessarily a bad thing, and doesn't need to be toned down. Infact it works quite well if you digitally crank it up... 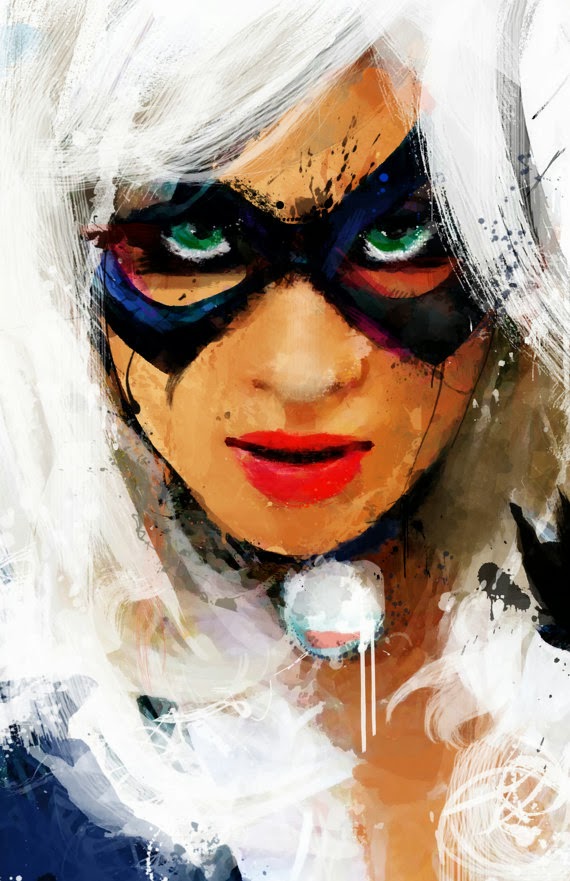 Never on Making A Mark, have I featured some one whose work I would hang on my wall more than Jason's. The mix of textures, the colours, the big strokes and splashes - it all adds up to art that is as vibrant as the fun and talent that went into its creation.

Flash crackles with speedforce, Iron Man's saddened faceplate leaks tears, and while the work of Deathstroke and Black Cat isn't as refined as the others, the gaze of each still captures everything about their respective character in one go.

One of Jason's favourite characters due to her complex relationship with Spider-Man, Felicia Hardy here looks more dangerous than Catwoman ever did. It almost looks like a movie poster - or preferable a Black Cat #1 cover - just waiting to be used.

Counting amongst his influences Michael Turner, J. Scott Campbell and Jackson Pollock, Oakes was inspired after his military service to fuse the worlds of comic and fine art. Seems to me, he's already doing a damn fine job.

What do you think?  To see Jason's full artistic gallery, including Loki, Star Trek, Predator and Hulk, click here. To go straight to his Etsy store or take up his offer to suggest a character, click here.
Posted by IADW at 1:54 pm