Tuesdays. You went back to work on Monday refreshed, and after a day of workplace politics and guff you're now looking for the nearest window to escape. No wonder Tuesday's feature Now Comes The Cosplayer is one of the biggest audience grabbers - the idea of escapism is never more attractive than then. 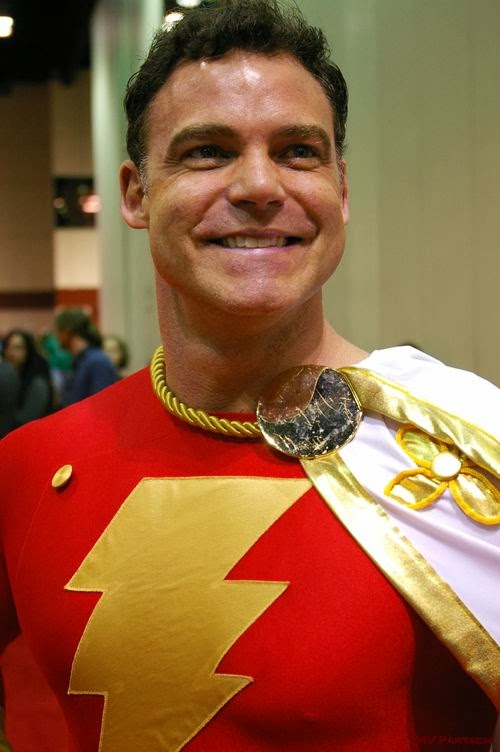 From 'The Invisible Woman' to 'Captain Marvel', many of the featured Cosplay artists have generated a lot of buzz over how well they represent pop culture's best. As if a sign from the Wizard Shazam himself, the Captain Marvel I featured, Cosplay artist Jay Tallsquall dropped me a line over his IADW spotlight, and offered to supply a better lightning inclusive version of his take on Earth's Mightiest Mortal (which you can see here).

Not one to wait for lightning to strike twice, I flipped a few questions his way in return. Here is how he kindly replied;

IADW) From Captain Marvel to Booster Gold, you have cosplayed as a variety of comic characters, choices outside the usual Cosplay favourites. Is there a selection method you use or do you have favourite eras / artists / titles within comics to draw from?

Jay Tallsquall) Many of my choices come from the artists I most admire: Alex Ross’ Kingdom Come inspired Captain Marvel, Michael Turner for Cannon Hawke, George Perez for Superman, but they also come from groups that I want to do with friends. Something that inspires a goal that I can set for myself or even the visceral “I want to do/be THAT” love-at-first sight all fans get when seeing something.

My favourite era would have to be the late 80’s to early 90’s. The New Teen Titans and Wonder Woman relaunches. X-Men was in its heyday (IMO at least), Image and Top Cow were creating a whole new style of comic art with Marc Silvestri, Michael Turner and Todd McFarlane on the scene, not to mention I was just beginning my own career so I could buy all the comics I wanted.

IADW) What was the first costume you ever remember wearing? Have you ever surprised yourself at how much you became a character?

JT) My mom made all our costumes when we were kids, so I can remember many Halloween costumes (devil, bat, jester, etc.). I think the devil was first, but I remember the bat the most because no one really knew what I was.

The costume that surprised me most had to be Ted, from Bill and Ted’s Excellent Adventure. It really started me on my current costuming path. I was doing it for a Hollywood themed event at work and had to wear it for two weeks every morning. After about the second day, once that costume was on, I WAS Ted. There was such freedom in not being my professional self and becoming the laid back slacker that is Ted Theodore Logan, I was hooked.

IADW) To bring to life the likes of Cannon or Captain Marvel, it helps if you're in shape. Chicken or the egg, what came first? Did wanting to be the best Cosplayer create the drive for the exercise machine you go through or was that already well-established and you just thought 'Hey, I need to spandex this'?

JT) I had been working out and keeping in pretty good shape since 2000, so fitness was already a part of my life, but costuming became the thing I needed to drive me to the next level.

Conventions became my equivalent of competing in bodybuilding/fitness competitions. Thor was the first costume that I set a physique goal for. I remember exactly when I made that choice: it was the 4th of July 2010, I was at a party with a lot of fellow costumers and they were all talking about Dragon Con coming up in September. I knew I wasn’t able to go, so I decided that MegaCon (the following March) would be where I would show up - not just with a new costume, but having transformed my physique as well. 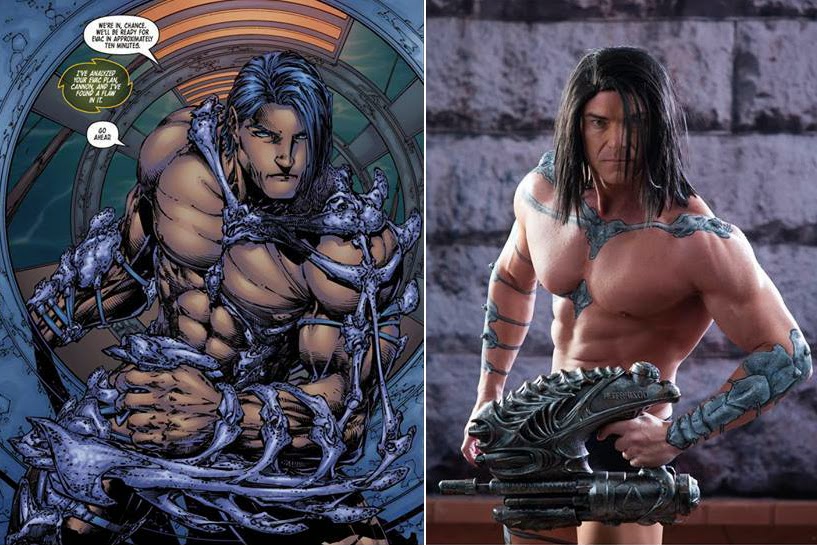 The Thor movie costume concepts had just come out, as well as the teaser poster of Chris Hemsworth pulling the hammer. To pull off that costume the way I wanted to, I knew I needed to gain approximately 20 lbs. of muscle, so I took the next nine months and made it happen.

Cannon was my biggest challenge. I knew I had to get leaner than I ever had to be able to emulate one of my favourite characters from my all-time favourite artist. As it was Aspen’s 10th Anniversary, I really wanted to make sure I did the costume as much justice as I could.

IADW) Cosplay is not entirely a solo effort for you. You've mentioned you're a part of a Legion of Super-Heroes. Can you tell us more about that experience and how that came about?

JT) The number one rule of Cosplay and Costuming is to HAVE FUN. To me, nothing is more fun than getting a group of friends together and going as a group. A lot of these groups come from one person creating a dream costume and everyone gathering around it. My Thor kicked off an entire Asgardian group.

My friend Rusty, whose dream was to do Ted Kord - Blue Beetle (who also previously featured on IADW here), kicked off our Justice League International group. The fact that my friend Matt looked like Lightning Lad from The Legion of Superheroes cartoon kicked off that group. That then got mixed and matched as people came and went.

Groups are a blast and I encourage everyone to join in one whenever you can. In fact I have a whole new one coming up for Megacon 2014!

IADW) Cosplay can be a lot of fun, but at the same time, it can also be a pretty serious gig. What advice would you give to people looking at getting into Cosplay that you've found handy?

JT) Have a sense of humour and don’t take yourself too seriously. At the end of the day this is about celebrating your fandom, so keep it FUN.

What do you think?  I'd like to thank Jay once again for sharing his experiences in Cosplay and the positivity it generates. In speaking with him, you can feel the enjoyment he gets from sharing such a social and creative environment with his friends, and that in any aspect of life is pretty special to have.

For more On The Five interviews, including Dan Jurgens, Mike Grell and Bob Layton, click here.
Posted by IADW at 3:00 pm