PANEL BEATER: The Best Comics From My January 2014 Pull List

What a great way to kick off the year!  This months reads hit the New Year hard, so let's get into highlighting the best of the month that was January 2014!

BLOODSHOT and H.A.R.D.CORPS #18 Lordy, Lordy, Lordy - Bart Sears' Bloodshot can't be beat! The iconic artist has only got a couple of issues, but if Valiant has any nanites about them, a second run should be sorted ASAP.

ALL NEW INVADERS #1 While the last page felt a bit tacked on, making the Nazi controlled deity Hela, Goddess of Death (whose hat oddly suits a swastika backdrop) made the 'shared vision' one of the months' best scenes.

DEAD BODY ROAD #2 This comic is like The Transporter in print. The creative teams stand-out 'Jason Statham'? Colourist Moreno Dinisio. By bullet, car chase or seedy hotel, whenever you turn the page, his hues trump all.

THE COMIC OF THE MONTH:  LAZARUS #5

If any comic makes me want to say 'Go grab this issue and if you don't like it I will refund your money' it is Lazarus #5. It is that good. What stops me? My wallet, the wet blanket it is just isn't up for the gig. But you should be. This is the start of a new arc, meaning it's the perfect spot to dip your feet in. 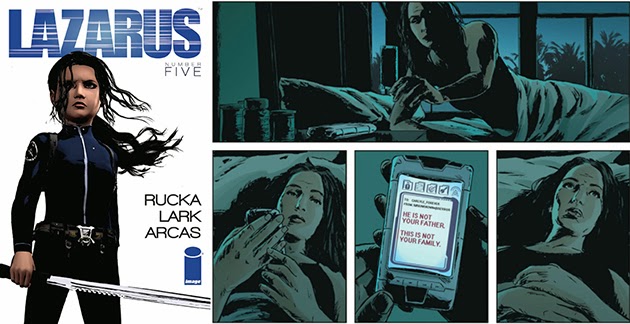 WHAT YOU NEED TO KNOW: Wealth is mankinds' new borders. Not geographic boundaries or political lines. A few families hold all the power and everyone else is waste. But waste can rise. Elevated to service through family selection, the Carlyle family is about to 'Lift' their chosen recipient in a couple of weeks, if the mysteries besieging their genetically engineered sword 'Forever' don't bring the house down first.

WHY IT IS TOPS: Where to start? Michael Lark is handing in the work of his life, more so than he did on Captain America, the detail and grit he brings to this semi-realistic yet futuristic world is stunning. Monthly artists shouldn't be able to pull off this level of detail, but aided by Brian Level he does - in both art AND lettering.

Then there's Greg Rucka. Everyone knows Greg can write great women blindfolded, but Forever Carlyle is easily the strongest female to leap from his pen. It's not just what the unkillable fighting machine does that makes the book soar, it's the way Greg captures the separatism of the new world order in ways both big and small. From every scene change telling you how many family, serfs (who provide a function) and waste are 'living' in each location, to flood threatened farmers bidding for aid relief, all help submerge you as a reader in this materialistic world.

MOMENT OF COMPLETE BADASS-NESS  As Forever prepares for the Lift and trying to unscramble the mysteries that probe at her past, she arrives on the edge of a river where her escapee brother abandoned his crashed craft, a river that borders her family's land and that of Bittner and Hock's. After inspecting the scene and trading words with opposing forces on the other side, she turns to leave, and that's when trouble starts (click to enlarge); 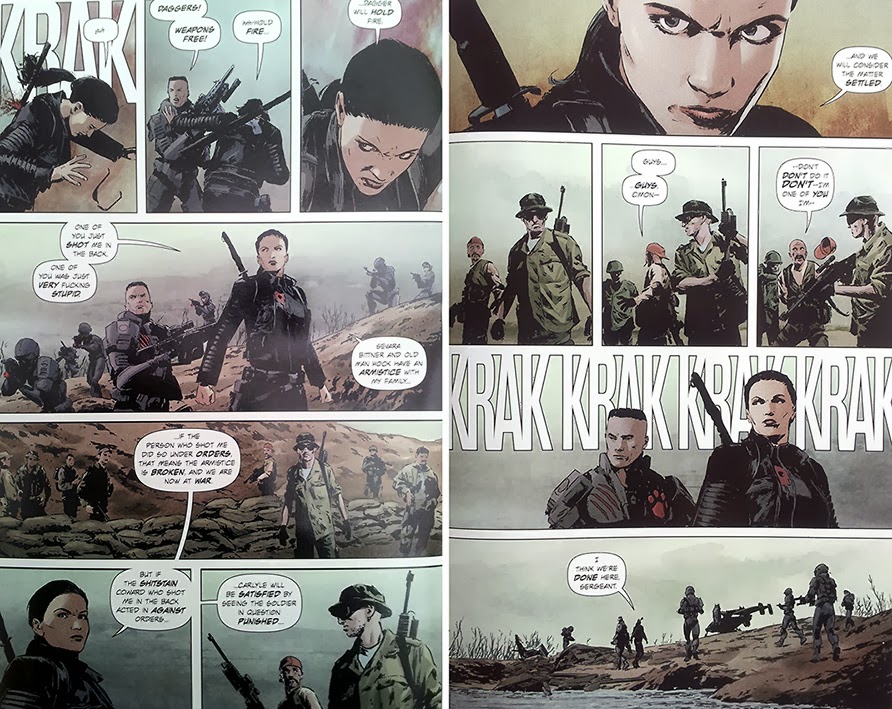