PRIDE OF A NATION, PRIZE OF THE STARS: Rai and Armor Hunters Lead Valiant First Initiative

For months Valiant fans have peered into the future hoping for signs of Rai on the horizon. This week, the defender of a futuristic Japan not only came into view, but brought giant robots, aliens and more with him, including a warrior in endless love with a ghost. It's 'Valiant First' and backed by a dedicated Tumblr page, its first wave looks like this; 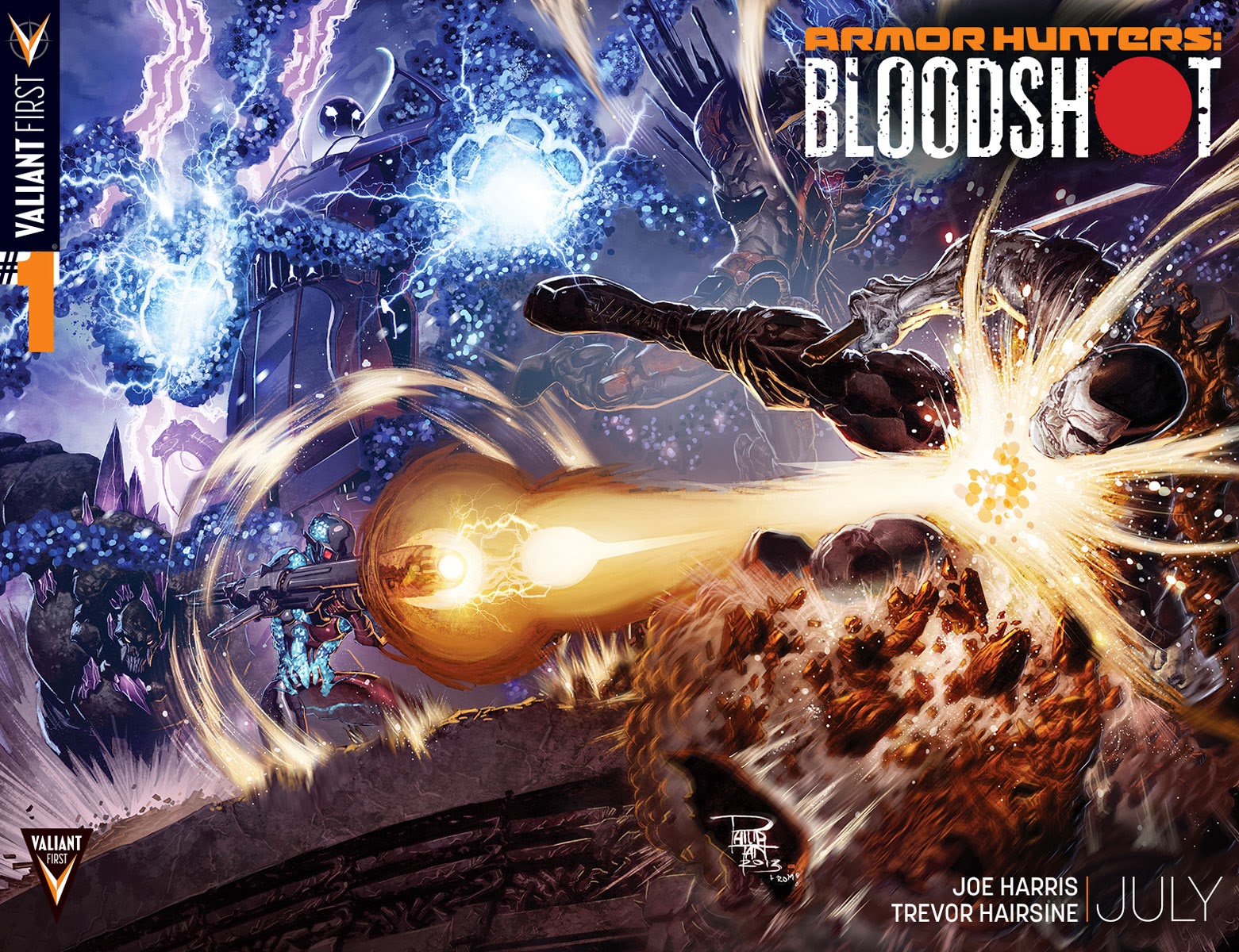 ARMOR HUNTERS #1  (June) (W) Robert Venditti (A) Doug Braithwaite. A Valiant Universe mini-series and crossover event! A relentless strike team from the farthest reaches of space – sworn to exterminate the X-O Manowar armor and all like it – have found finally their last target. They will hunt. They will trap. And they will kill.

The blockbuster 18-issue crossover event will take the fight into the pages of Unity, X-O Manowar and;

ARMOR HUNTERS: BLOODSHOT #1  (July) (W) Joe Harris (A) Trevor Hairsine. With Earth under siege, the most dangerous weapon in the Valiant Universe is the only thing standing between the destruction of the extraterrestrial intelligence agency known as MERO and the liberation of one of the Armor Hunters' own.

ARMOR HUNTERS: HARBINGER #1  (July) (W) Joshua Dysart (A) Robert Gill. Out of the ashes of Harbinger Wars, volatile psiot strike force Generation Zero step into their first adventure – into the crosshairs of the Armor Hunters! 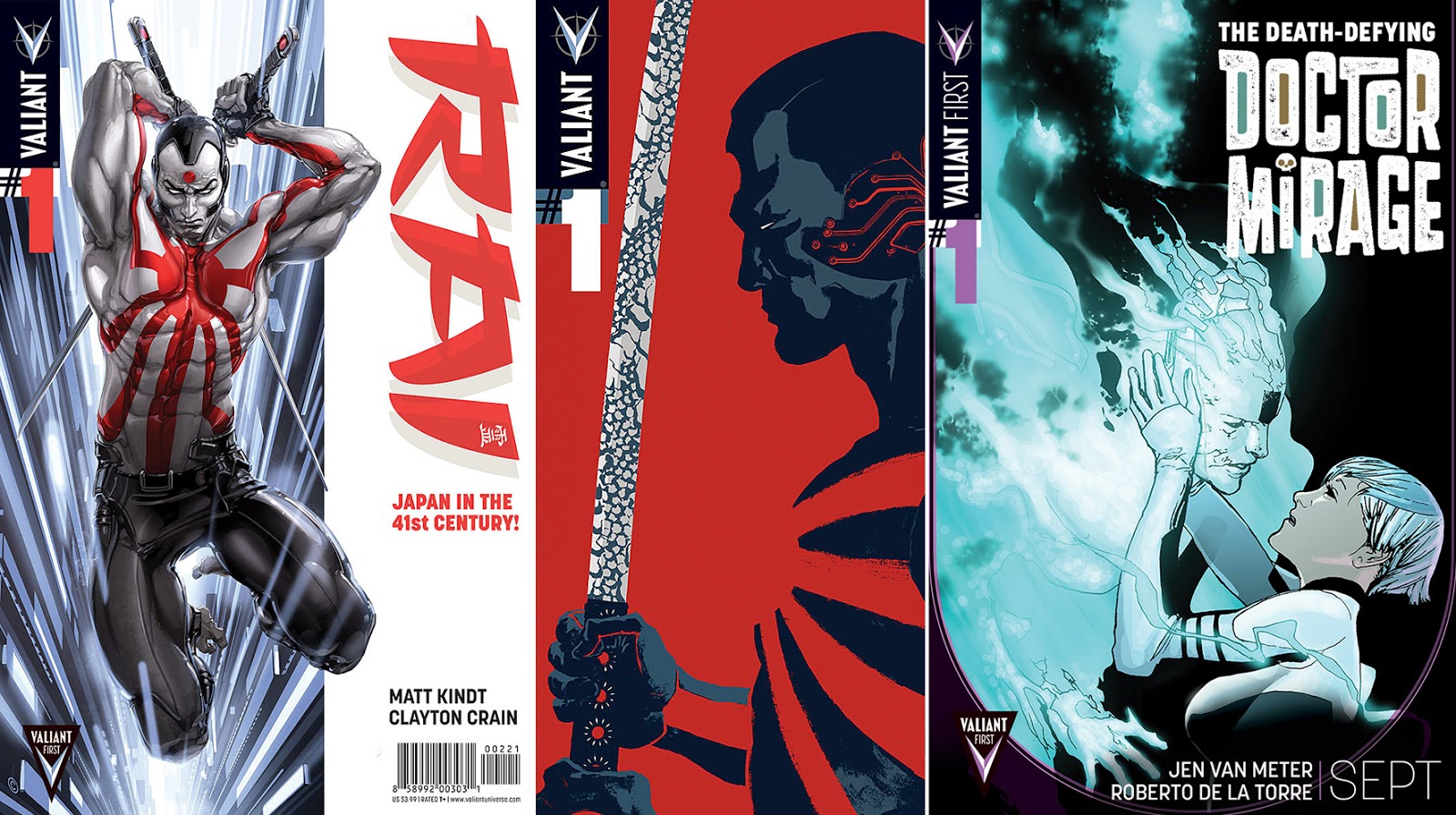 RAI #1  (May) (W) Matt Kindt (A) Clayton Crain. Ongoing series. In the far future, Japan is a single endless city-state, governed by a benevolent artificial intelligence and policed by an army of just one – the mysterious Rai, spirit guardian of the rising sun. But, soon, a single bullet will shatter the peace it has taken 2,000 years to secure…

THE DELINQUENTS #1  (August) (W) by Fred Van Lente and James Asmus (A) Kano. It’s the world's worst team-up when Archer and Armstrong meet Quantum and Woody in a swashbuckling, conspiracy-smashing, partner-trading, goat-fueled race across the USA!

THE DEATH-DEFYING DR. MIRAGE #1  (September) (W) Jen Van Meter (A) Roberto de la Torre. Parapsychologist Dr. Mirage and her husband Hwen were madly, deeply, stuff-of-legends in love – until a tragic accident stole Hwen away. Now, Dr. Mirage will have to use every ounce of her training in the mystic arts to break her one taboo – journey across the realms of Deadside and bring her love back to the land of the living.

What do you think?  Boy those Rai covers are hard to take your eyes off! Hopefully Spider-Man 2099 and Judge Dredd fans take a chance on his new book when May hits. He's my true figurehead of Valiant, and if the preview art is to be believed, he will be one of the few futuristic heroes actually operating in a city that looks futuristic!
Posted by IADW at 3:00 am