SALES PITCH: The Top 6 Comics Of January 2014 And Those Past

Everyone loves a New Year. Resolutions, get healthier, fitter, give stuff up, take more on, be a better you, party, party, party - the month has it all. If your resolutions last till the end of the month, well even better. In comic sales for the month of January 2014, Marvel lead in terms of unit share over second place DC by 6.62%. That butt-kicking aside, the real winner was Image Comics on third. The home of creativity broke the 10% unit share ceiling for a non Big Two publisher, kicking of the year with a reason to celebrate and no doubt a resolve not to stop there.

While sales overall were down on both the month prior and those of January 2013, Saga Vol 1 again topped the Graphic Novel charts. Back in the world of comics for January 2014, the Top 6 looked like this; 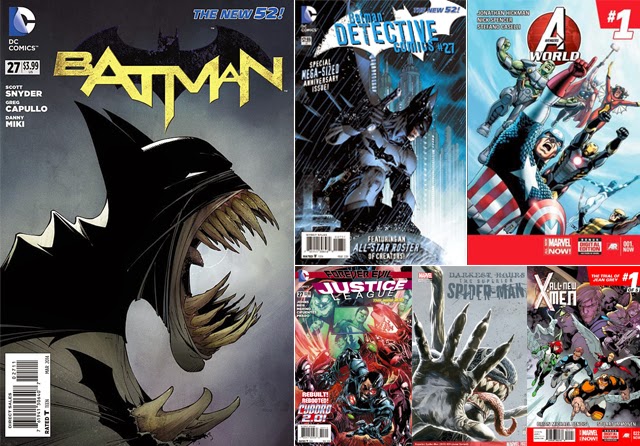 MY THOUGHTS:  Boy that Venom cover by J.G. Jones is wicked isn't it? And Batman by Jim Lee? Bats is truly tops at the moment and being the definition of 'cool' for everyone over the age of 12 months, he deserves to be. If the DCU as a whole had been as untouched as Bruce Wayne's multi-billion dollar generating obsession, the gap between rich and the poor in the DC52 wouldn't look like you could fit a Gotham City between them.

THE LITTLE ENGINE THAT COULD:  While The Walking Dead version of Monopoly topping the games chart is pretty groovy, the real entertainment icon remastered was the second IDW Artists Edition starring John Romita's Amazing Spider-Man. Sitting atop the books sales chart despite its $95 price tag, this shows both the love of this Spider-era, and with a new Amazing Spider-Man on the way, the Peter Parker that needs to return.

TOP COMICS OF JANUARYS PAST:  In 1997 X-Men #62 saw Shang-Chi grace the top spot, fingers are still crossed one year he'll do it without Wolverine's help. Hulk #1 in 2008 kicked off one of the most iconic artistic takes on the character thanks to artist Ed McGuinness, and back in 2004 the second issue of Ultimate Fantastic Four saw Adam Kubert's art spin the quartet into a whole new universe.