SWEET AS: The Best From Marvel Comics' May 2014 Solicitations - Original Sin, Shang-Chi Gets A #1 At Last, And A New Look Mysterio?

When we Kiwis find something we like, we say it's 'Sweet as'. From the Shang-Chi finally getting a new #1 - with covers by Dave Johnson no less, to the launch of event Original Sin, when I look at the best and new releases from Marvel Comics for May 2014, these make the 'Sweet As' grade: 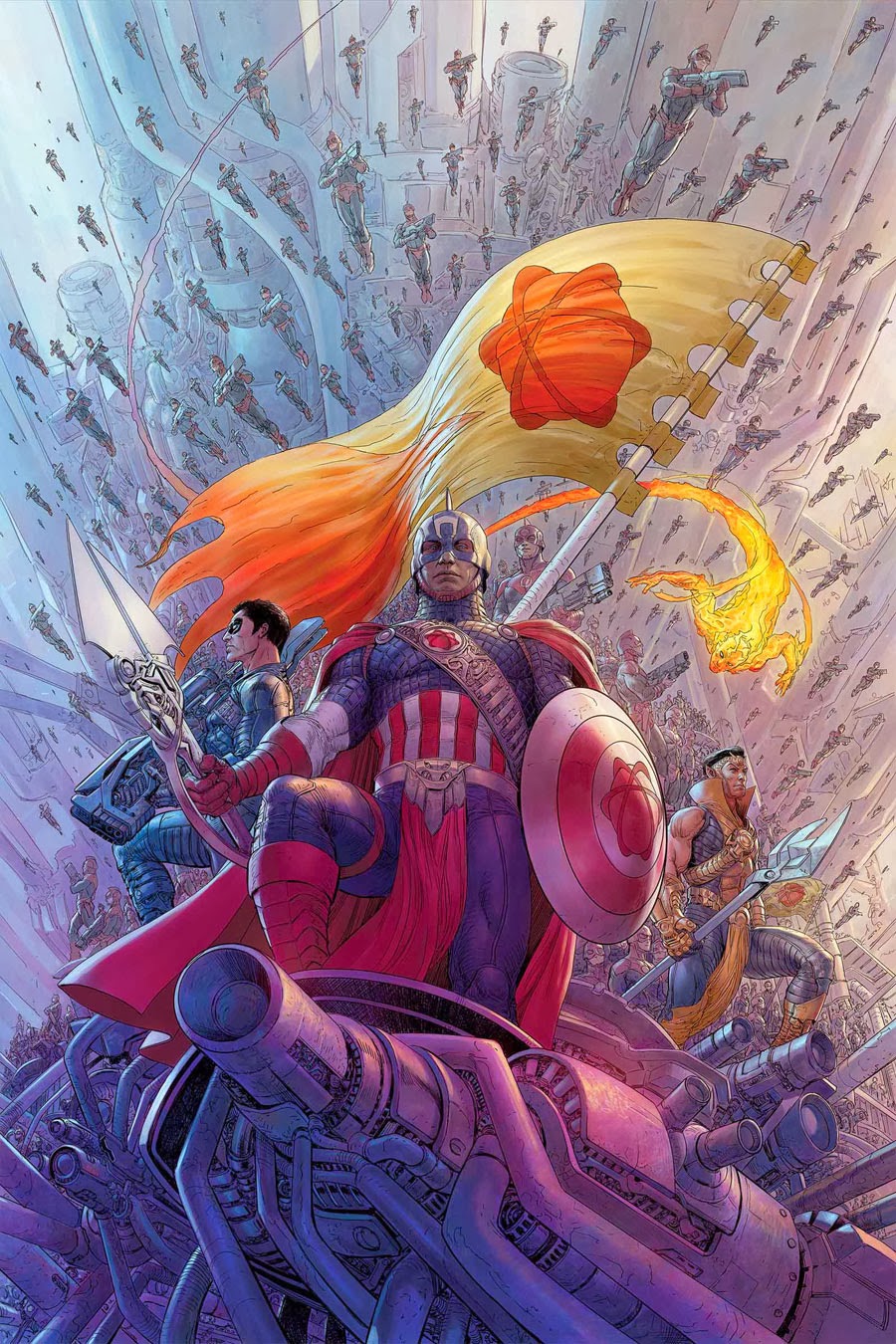 Now that is an army. Of course you've got to have Cap at the front, rumor has it he doesn't come out of his trailer for anything less.

Marvel says: 'Gods and Soldiers' concludes! The Invaders are trapped on a hostile world and under relentless attack from a mind-controlled god. Facing a fate worse than defeat, will Captain America, Namor, The Winter Soldier and The Human Torch become the means for the Kree Empire to conquer the galaxy?! (W) James Robinson (A) Steve Pugh

FANTASTIC FOUR #4 The Fall Of The Fantastic Four part 4. FLAME OFF!!! Johnny Storm has lost his powers - The Human Torch is no more! With one member down, a new threat emerges -- the Wrecking Crew...with powers mysteriously elevated to A-level destruction as they team-up with the Wizard to be a new, Frightful Four! As Ben and Alicia's romance rekindles, so looms the Puppet Master with dark plans for both of them. All this and Ant-Man, She-Hulk and Ms. Thing return. (W) James Robinson (A) Leonard Kirk

FANTASTIC FOUR #5 The Fall Of The Fantastic Four part 5. A super sized issue! The Baxter Building is quarantined and shut down as the Fantastic Four are held accountable for the destruction in Manhattan! A major turning point for the team and a dire blow to the family! The trial of the century featuring an all-star roster of guest artists! (W) James Robinson (A) Leonard Kirk

NEW WARRIORS #4 The end is here as the Second Evolutionary War begins! The New Warriors face off against the High Evolutionary. Can they stop world-wide genocide? Should they? How many lives would you sacrifice to save all of humanity? (W) Christopher Yost (A) Marcus To

SILVER SURFER #3 Any old heroes can save the day. The Surfer and Dawn are out to save the day after. As everything goes kablooey, find out why the fate of every possible tomorrow rests... in a wind-up toy monkey. No. Really. (W) Dan Slott (A) Michael Allred 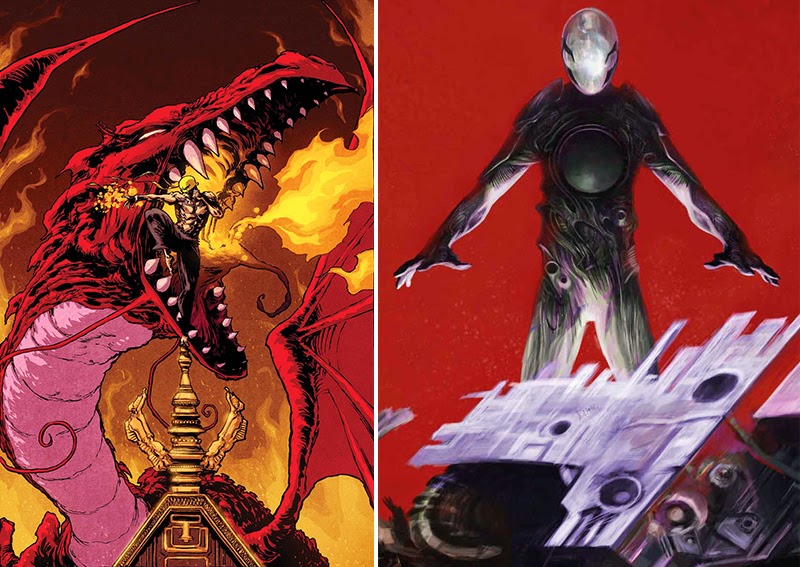 SOUNDS LIKE AWESOME
IRON FIST: THE LIVING WEAPON #2 K’UN LUN under attack! Danny Rand returns to the aid of his adopted home, but will he make it in time? (W/A) Kaare Andrews

UNDER THE RADAR
Could there be a new look Mysterio in the Marvel Universe? From the look at that image then read this solicit information for UNCANNY X-MEN #21 'Who is the mysterious figure building Sentinels for S.H.I.E.L.D.? Find out what happened to Dazzler since Mystique took her down! (W) Brian Michael Bendis (A) Chris Bachalo' - if it is that is one mean as new take on the bowl head! 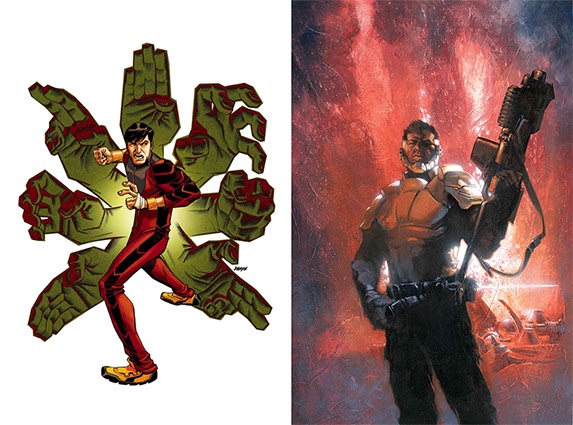 DEADLY HANDS OF KUNG FU #1 (OF 4) A former lover of Shang-Chi’s is murdered in cold blood while working deep undercover for MI-6. When Shang-Chi travels to England to pay his respects he learns all is not as it seems, and if he’s not careful he may be next to die! Old friends, new enemies, espionage and kung fu collide! (W) Mike Benson (A) Tan Eng Huat

THANOS ANNUAL #1 Jim Starlin and Ron Lim return to Thanos, as he must face Mephisto, his future self, the Avengers and more! Learn how a defeat in Thanos’ past set events into motion that will redefine the Marvel Universe in the near future! A prequel to the Thanos: The Infinity Revelation original graphic novel! 40 pages. (W) Jim Starlin (A) Ron Lim

CYCLOPS #1 Cyclops just discovered that the father he thought died long ago is alive and well and a space pirate. The first ongoing solo series for one of the time-traveling Original X-Men, after the events of Trial of Jean Grey, Scott Summers stays in space to learn some valuable lessons from his dad: 1) How to shave, 2) How to talk to girls, 3) How to steal a Badoon space-ship.

THE UNITED STATES OF MURDER INC. #1 DOUBLE-SIZED FOR REGULAR PRICE! From the creators of the Eisner Award-winning, Powers comes a brand-new world of crime fiction. In this issue, discover a world in which the families of organized crime never lost their stranglehold on the United States. Today is the day that Valentine Gallo becomes a made man, and it’s also the day he learns the secrets behind the organization he has served since he was old enough to walk. But it is mysterious hitwoman Jagger Rose that will forever turn his life upside down. (W) Brian Michael Bendis (A) Michael Avon Oeming

PAINKILLER JANE: THE 22 BRIDES #1 (OF 4) DOUBLE-SIZED FIRST ISSUE! Romance and chaos is in the air as Jane is joined by a group of mercenary assassins called The 22 Brides as they take down a group of terrorists causing chaos in NYC. (W) Jimmy Palmiotti (A) Juan Santacruz and Steve Manniona