TRADING POST: Bullet Reviewing All The Retro Comics $3.99 Will Buy

In honour of the Justice League, my pull-list has a 'Floating Chair'. However, rather than being a chance for the world's greatest to call in a specialist ally, I use it to play a little game. Jump online, and see how many comics I can win in online auctions, bidding no more than the cost of a modern comic in total, then bullet review them online.

This month, it was at a garage sale. Which is a mite sadder, as I actually met the person whose collection I stripmined. Still, for the month of February 2014 my $3.99 haul looks like this; 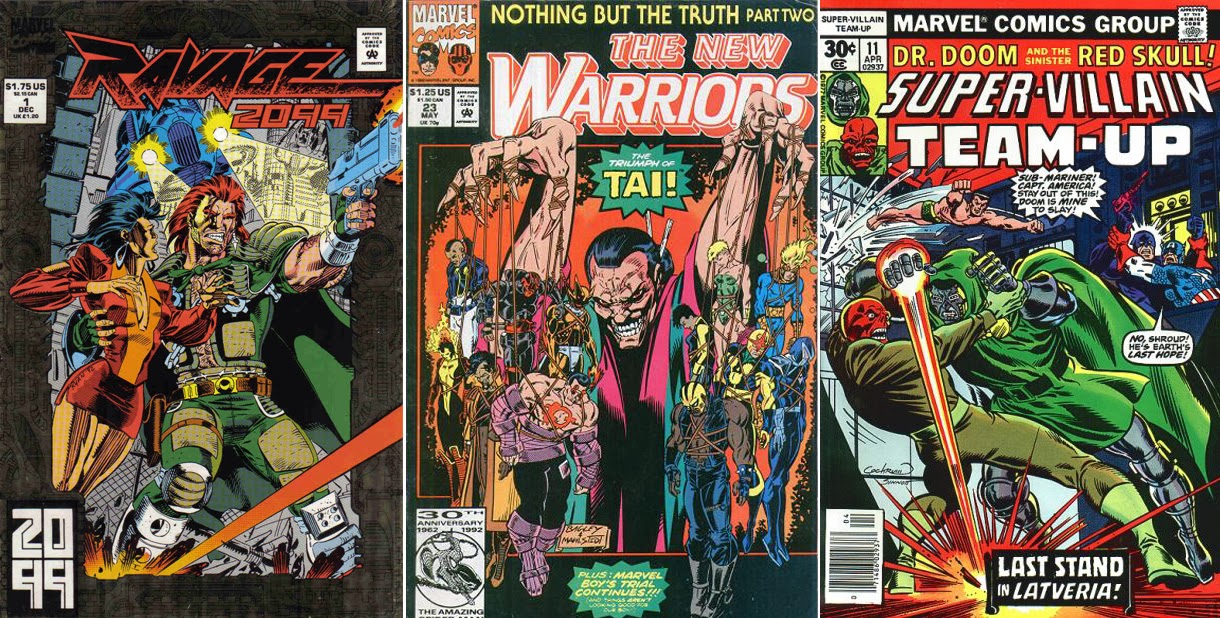 RAVAGE 2099 #1 I just can't say this hero's name without putting 'Eject' before it. From Marvel's much missed 2099 line and armed with the sweet art of Paul Ryan, Ravage 2099 tries its best to be a futuristic Greenhouse of Ideas. 'Greenhouse', because in true 90's fashion, its Blade Runner-ish cool is saturated in 'eco' this and that at every turn.

While at times feeling like a P.S.A. comic, Ravage does have plenty of action. In between holographic virtual reality sessions with Tigra, Wasp and Lady Dorma, the head of Alchemax crazily employed a one-man army to run his environmental watchdog; Eco Central. As his corruption strings unfurl through 'classic Marvel' Stan Lee written dialogue, he now orders that one-man army's assassination. D'oh.

Tipped off by a sassy street teen and his devoted P.A., Paul-Phillip Ravage survives. Ditching his suit for junkyard attire (including trashcan shield), Ravage jettisons the rest of his name and takes to the road in a rubbish truck to recycle crime. A little less Captain Planet, a bit more Mad Max and that road could've easily been a highway. ***** 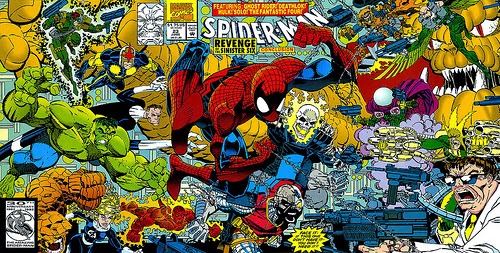 SPIDER-MAN #23 A chance to replace my old copy of Erik Larsen's last issue on Spider-Man before departing to co-found Image is too good to be true. Not only does this issue have one of the best Spidey / fold-out covers of all time, it is essentially a free-for-all between Spider-Man's best buds and a Sinister Six which includes the monstrous Gog.

Sure, naysayers will claim some guests don't get much room, but it's a better idea to put those three haters in a dinghy pushed out to sea, than it is to fault a fun issue written and drawn by the same man, pitting Hulk against Dr Ock. The Vulture almost giving up as The Fantastic Four burst in is hilarious, especially with Sue cautioning Ben he is "still an old man". Too serious titles could learn from issues and eras like this. P.S. Give Deathlok his book back. *****

NEW WARRIORS #23 Another hole complete, I never thought a whole issue of content could be found between #22 and #24. Wrongo. Firestar's testimony in court being twisted against her bf, Marvel Boy, accused of killing his abusive father, is just one hit in an issue that handles a lot of explanation into the manipulations of the murderous Tai.

While artist Mark Bagley seemingly skimps on the backgrounds in advance of the upcoming double-sized #25, writer Fabian Nicieza's knack for characterisation remains at a high. From Left Hand's schemes for the power promised the children of the Dragon's Breadth, to Darkhawk being the voice of reason as the Warriors fly a stolen Quinjet into Kampuchean airspace posing as Avengers, it really is a good dose of teen team magic in twenty two pages.  *****

SUPER-VILLAIN TEAM-UP #11 The highest rated post on IADW features Magneto duking it out with Red Skull. In this issue it's Dr Doom's turn, only he's not doing it for WWII reasons - this is classic Victor, and his reasons are brilliantly yet egotistically all his own.

Written by Bill Mantlo, The Shroud has led a revolt in Latveria that has seen Doom dethroned. As the blind hero's impostor Doom readies to take over, the rebels find the Skull has already taken the chair for his own. Now as Namor is propositioned by the former Nazi into joining his side, a shrunken Doom battles his way toward his hijacked castle. At his side, Doom's old rival Captain America (also miniaturised), who before the issue is through, will take on the Shroud to help Victor be victorious. Adding in snakes, cosmic death rays and lunar bases doesn't hurt either. *****