The last time I spotlighted Kids Cosplay, it was pretty damn cool. And how could it not be? I mean, what an amazing experience Con's must be for kids. If we second guess our eyes as adults, imagine how they feel! Or if you're too tired to imagine, crank your 'awwing' gear up and let these pictures tell you;

The little dude with Wonder Woman and The Flash is relaying how he thinks 'Captain Stupidhead' is a better name for Cap Cold or Boomerang (he ain't fussy), while at Dragon Con 2012, Daredevil uses his clubs to get the kid to answer 'What room is Gandma's body buried in?' See what the boy answers here.

Still enough mush, this ain't Oprah, time to get back into spotlighting the kids who don't just walk amongst heroes and villains - they become them as well.

Now Doctor Octopus is one kid who clearly doesn't want to eat his breaky! Decked out in the classic Octavius look, he was heard to scream "Curse you Parent Parker! Cut off my Goddamn crusts'! Optimus Prime is living proof you can turn lemons into lemonade. His parents originally put him in a box and stamped it for Malaysia, but forgot to take the paints and scissors out first. A few snips here and a dab of red there, and the kid was ready to roll out. 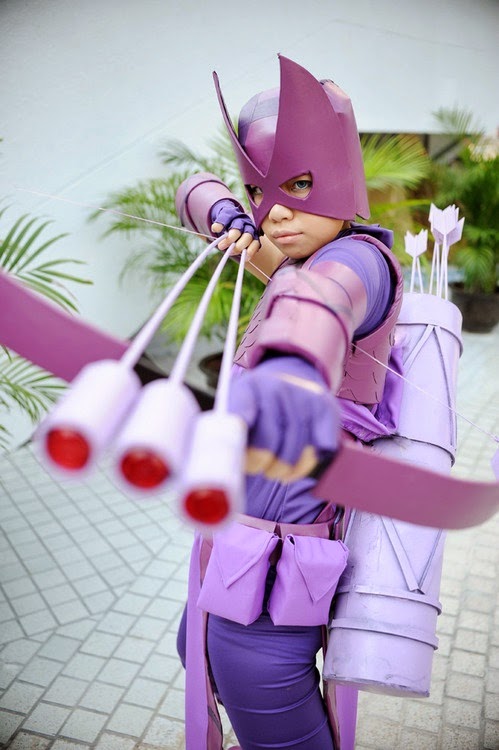 Robin shows how a little Damian Wayne attitude goes a long way on camera. Why the fist? When he saw dad paint the mask, he was hoping for Green Lantern, Kyle Rayner. That sound you hear is the disappointment facturing his childhood as the camera flashes.

Last time I spotlighted Kids Cosplay, one of the hit photos was of a little dude being Green Arrow. Closing off this post, it seemed the perfect bookend to round off with Marvel's resident archer Hawkeye - in his non-movie version costume to boot!

This looks like a perfect homage to the cover of Avengers #223 - you can almost picture Ant-Man on the tip of those arrows ready to be fired forward!