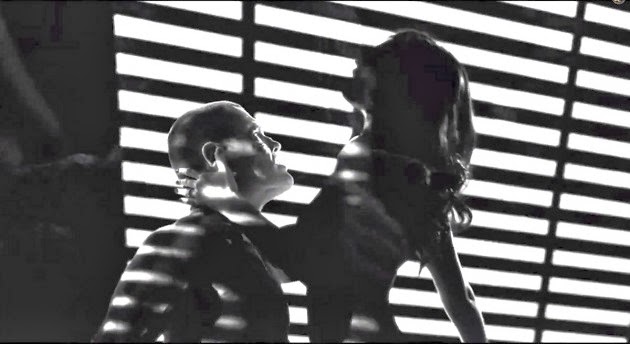 Frank Miller's Sin City was everything that was missing in mainstream comics when it debuted in Dark Horse Comics Presents. Grim pulp noir that didn't hold back. Miller's skill with the pencil lept hurdles, playing with positive and negative space in ways like few artists could dare. Paving the way for comics like Criminal, Sin City's best aspect of was in that each bullet of story featured new cast members that told their own tale, yet collectively and cleverly intertwined with those that came before it if you were a longtime fan.

Now the darkest epic of all; A Dame To Kill For, is about to follow its all-star first installment into theatres. Following the brilliant casting of Casino Royale's Eva Green as Ava, Dwight's - well to say would be spoiling it for fans who haven't read it - but lets just say, if you thought Eva being cast as the 'nasty' in 300: Rise of An Empire was sweet - you're not going to want to miss this...

Some of those frames look lifted directly from the comics! Also proving the Miller movie-verse like their loyal actors, Jessica Alba, Bruce Willis, Rosario Dawson, Mickey Rourke and more reprise their previous roles, while newcomers Joseph Gordon-Levitt, Dennis Haysbert, Christopher Meloni and Lady Gaga step in for the ride.