SALES PITCH: The Top 6 Comics Of February 2014 And Those Past

February - the month of luuuuvvvvv. So what did comic fans love about February 2014? Well Marvel still held the spot of Publisher #1, over closest rivals DC by 6.24%. Image Comics retained third, despite the fact IDW's hardcover Locke and Key Vol6: Alpha and Omega bet them to their usual #1 spot on the highest selling graphic novels list.

Graphic Novel sales increased in this time last year by a unit percentage of 14.77%, where comic sales dropped by roughly the same figure. The number one comic slot went to DC, thanks to the license to print money that is Batman, and the full Top 6 for February 2014, looked like this; 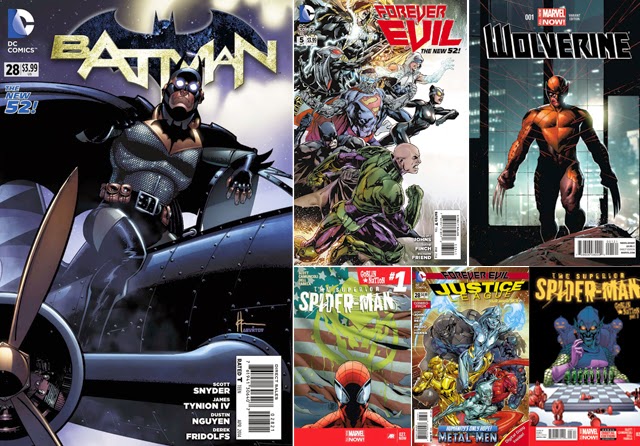 MY THOUGHTS: It's easy to see how the outside world sees comics as 'Batman, Spider-Man and Wolverine' huh? Though the Metal Men gracing the cover of a Top 6 book may be a sign of the apocalypse in some cultures, it is a sign of a greater armageddon that the launch of writer James Robinson's Fantastic Four #1 came in at spot #7. Surely that magic pairing outranks a new Wolverine hyped to be where Logan dies in a few months time.

THE LITTLE ENGINE THAT COULD: It's a repeat contender for this title, but Image Comics' The Walking Dead grabbed spots 8 (#121) and 9 (#122) in the larger Top 10 comic sellers list. Yes - both issues of a bi-monthly cracked the top slots. Give it a few months and there will be no doubt when it comes to the dead rising, who truly rises highest.

TOP COMICS OF FEBRUARYS PAST: In 2002 the third issue of Frank Miller's Dark Knight Strikes Again held the top spot, while in February 2008, Wolverine heading a deadly new X-Force #1 held that honour. Then in the mania of President Obama's election, the man himself held the cover of Amazing Spider-Man #583 as #1 in 2009.