SWEET AS: The Best From DC Comics' June 2014 Solicitations

When we Kiwis find something we like, we say it's 'Sweet as'. From the launch the new Doom Patrol arriving in the pages of Justice League to Aquaman vs Swamp Thing, when I look at the new releases of DC Comics for June 2014, these make the 'Sweet As' grade:

COVER OF THE MONTH:  JOCK  ADVENTURES OF SUPERMAN #14 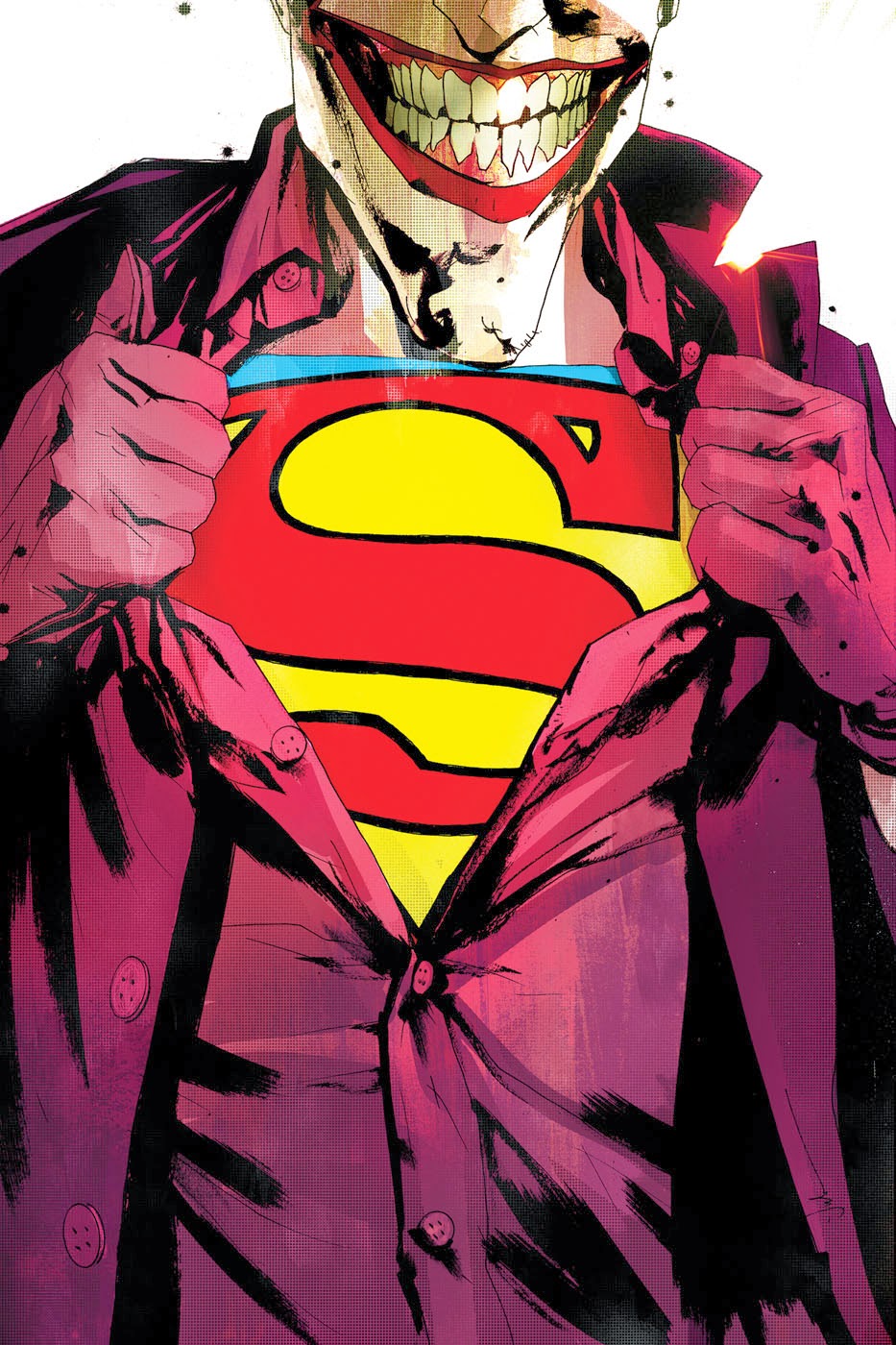 Jock is an artistic madman, and while Superman isn't the first hero most would match with his almost woodcut stylings, by marrying the icon's iconic 'reveal' pose with the equally iconic grin and wardrobe of someone on the other side of the DC character library, we get one cover that kills you on sight.

DC says: The Joker's in town...and he wants to meet Superman! Find out what happens next in this one-of-a-kind story from Chronicle writer Max Landis and artist Jock! Plus, Clark Kent's babysitting adventures as he looks after none other than Sugar and Spike! 40 pages. (W) Max Landis and Fabian Nicieza (A) Jock, Phil Hester and Eric Gapstur.

ASTRO CITY #13 24 hours. 24 pages. A robot. A bank robber named Gundog. The Hanged Man. Jack-In-The-Box. The eternal, mysterious Dancing Master. And a whole lot of romance. One of Astro City's most unusual stories, of city-wide turmoil and changing lives, all in a single day. (W) Kurt Busiek (A) Brent Anderson

ALL-STAR WESTERN #32 Now returned to the 1800s, Hex sets out to settle some scores the only way he knows how: violently! And he's going to start with an impostor who stole his identity! (W) Justin Gray and Jimmy Palmiotti (A) Staz Johnson

AMERICAN VAMPIRE: SECOND CYCLE #4 The fangs are longer, the claws are sharper and the mythos grows as Pearl and Skinner go head to head with their most vicious opponent yet. Is it possible to finally destroy a breed of vamps who can walk in the sun? 40 pages. Mature Readers. (W) Scott Snyder (A) Rafael Albuquerque.

BATMAN/SUPERMAN #12 A new arc begins! As something terrible happens to the World’s Finest team, a Dark Knight who is not quite himself must team up with Lois Lane to find a missing Man of Steel. Meanwhile, Selina Kyle encounters a person of amazing strength who has no idea who he is. (W) Greg Pak (A) Jae Lee.

UNDER THE RADAR
SWAMP THING #32 Swamp Thing versus Aquaman! See the other side of the battle that exploded between these two forces of nature last month in Aquaman #31! Is Swamp Thing guilty of the crimes Aquaman is accusing him of? (W) Charles Soule (A) Jesus Saiz

SOUNDS LIKE AWESOME
JUSTICE LEAGUE #32 Lex Luthor continues his acclimation to his life as one of the world's greatest heroes. But are his sights really set on the Dark Knight? And are the Dark Knight's set on him? Plus, someone else is targeting Luthor and his new allies - a man who believes himself Luthor's superior in every way...and maybe he is! Here comes The Chief and his treacherous Doom Patrol! (W) Geoff Johns (A) Ivan Reis and Joe Prado

BATMAN 66 MEETS GREEN HORNET #1 In 1967, TV history was made when two crime fighters met in a historic crossover. Now, these two iconic characters and their famous partners come together again. Set in the continuity of that earlier team-up, Batman, The Green Hornet, Robin and Kato must go up against a very different General (formerly Colonel) Gumm. What crime could be so deadly as to force these rivals to put aside their differences and join forces again? Co-published with Dynamite Entertainment. (W) Kevin Smith and Ralph Garman (A) Ty Templeton 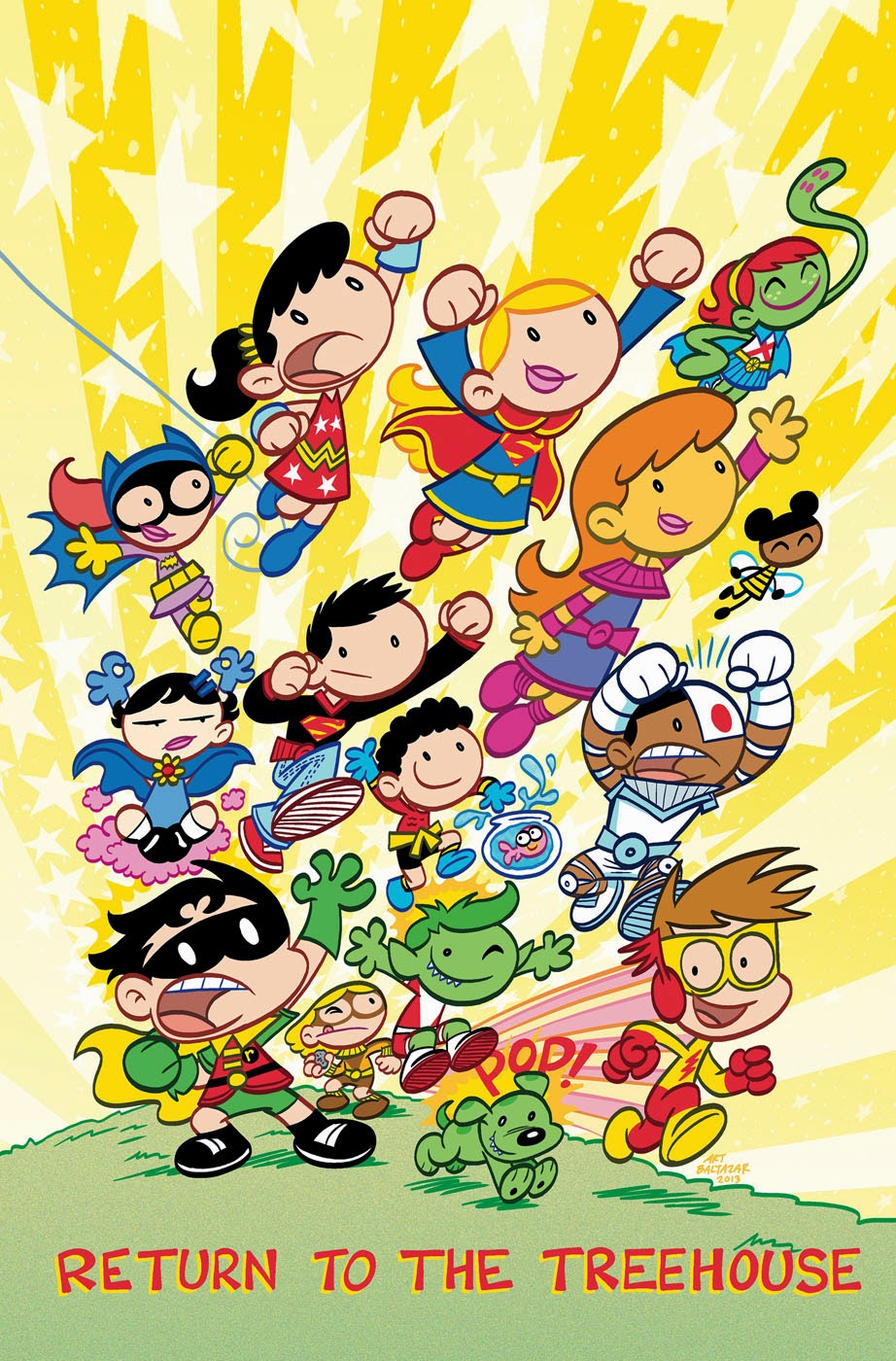 INFINITY MAN AND THE FOREVER PEOPLE #1 Four of the best students from New Genesis arrive on Earth to study and aid in the advancement of humanity - but they soon discover a darker purpose to their mission: a threat so great that it may bring the multiverse itself to its knees! The only thing that stands between them and total destruction is the mysterious entity known as the Infinity Man! (W Dan DiDio and Keith Giffen (A) Keith Giffen and Scott Koblish.

TINY TITANS: RETURN TO THE TREEHOUSE #1 (OF 6) The series is back for an all-new mini-series! Superboy and Supergirl return to the treehouse to discover - IT'S MISSING! Or is it just really small? Who could have done such a thing?! Find out as all your favorite Tiny Titans search for answers! (W) Art Baltazar and Franco (A) Art Baltazar.