When we Kiwis find something we like, we say it's 'Sweet as'. When I look at the best and new releases from IDW Publishing for June 2014, these comics make the 'Sweet As' grade:

COVER OF THE MONTH:  JUAN ORTIZ  STAR TREK: HARLAN ELLISON'S CITY ON THE EDGE OF FOREVER #1 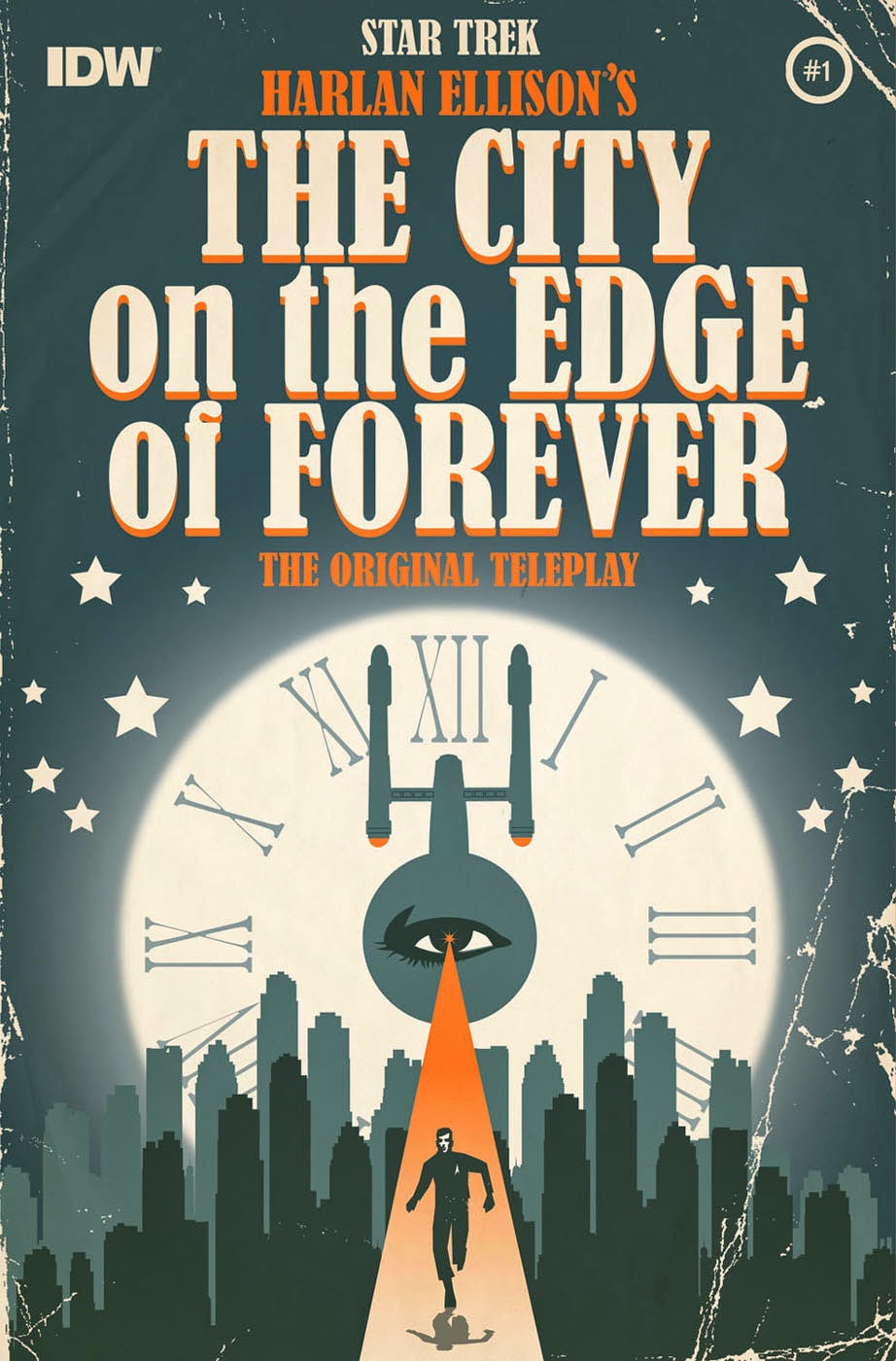 And what's not to love? Nice Typography, illustration and heck they don't even mind if the words 'Star Trek' are written as small as Klingon testies - now that's marketing bravery!

IDW says: For the first time ever, a visual presentation of the much-discussed, unrevised, unadulterated version of Harlan Ellison's award-winning Star Trek teleplay script, The City on the Edge of Forever! This Hugo- and Writer's Guild of America Award-winning teleplay has been much discussed for decades but only here can you see the story as Mr. Ellison originally intended! (W) Harlan Ellison, Scott Tipton and David Tipton (A) J.K. Woodward

TRANSFORMERS: ROBOTS IN DISGUISE #30: DAWN OF THE AUTOBOTS GALVATRON THE BARBARIAN! From Cybertron's ancient past came the warrior-king, Galvatron. Once, he united Cybertron and ushered in a Golden Age. Now, he wants to do the same to Earth... but Optimus Prime has a problem with that plan. (W) John Barber (A) Andrew Griffith

JUDGE DREDD #20 The American Way of Death, part 4 -- Dredd has looked Death in the eye before... but never like this! He realizes the only way to beat the Dark Judges is to send them back to Deadworld in a crazy sacrifice play involving D-jump machines as well as a whole lot of blood, sweat and ammo. His only allies: a turncoat Dark Judge, a furry ex-con with a pickaxe, and... what's this? A lost love from Dredd's past, back to settle up an old debt? (W) Duane Swierczynski (A) Nelson Daniel

SOUNDS LIKE AWESOME
TEENAGE MUTANT NINJA TURTLES: TURTLES IN TIME #1 A new mini-series! The Turtles become unstuck in time and go spinning into the past! First stop: the prehistoric age, where they are far from the most dangerous reptiles around! Will the Turtles be able to find their way home without damaging history? (W) Paul Allor (A) Ross Campbell

UNDER THE RADAR
TRANSFORMERS: ALL HAIL MEGATRON DELUXE LIMITED HARDCOVER This limited-edition hardcover, is signed by McCarthy and Hutchison, and hand-numbered to 350. This collection of the complete series has been packaged and presented in beautiful hand-assembled casing and silver metallic covers. (W) Shane McCarthy, Simon Furman (A) Guido Guidi

BEST OF THE NEWBIES

WINTERWORLD #1 All new stories based on the Chuck Dixon/Jorge Zaffino classic! The apocalyptic international comics sensation of an Earth turned to an icy hell is back. Follow Scully and Wynn from their icy home into a killing wasteland where the coldest place is the human heart. (W) Chuck Dixon (A) Butch Guice

ANGRY BIRDS COMICS #1 Angry Birds, the world's most popular mobile game franchise, makes it's comic book debut! Featuring a fun-filled, action packed story from Eisner-nominated creator Jeff Parker, these comics are ready to slingshot their way off the page and into your hearts! (W) Jeff Parker (A), David Baldeon

DAVE GIBBONS' WATCHMEN: ARTIFACT EDITION HC Watchmen has been called the greatest graphic novel of all time. Alan Moore and Dave Gibbons created a story and graphic narrative unlike anything that preceded it, and revitalized the entire art form that followed. It is the one book that nearly all comics readers know inside and out...or so you thought! Now, with the full assistance and cooperation of Dave Gibbons, comes Dave Gibbons' Watchmen: Artifact Edition, crammed full of high resolution scans shot directly from Gibbons' original art. Covers, interiors, advertisements, portfolio pieces, color guides--this is the ultimate collection of the ultimate graphic novel! 144 pages. (W) Alan Moore (A) Dave Gibbons