SWEET AS: The Best From Marvel Comics' June 2014 Solicitations - Avengers vs New Warriors, Johnson's Chi, And Black Cat Strikes Back

When we Kiwis find something we like, we say it's 'Sweet as'. When I look at the best and new releases from Marvel Comics for June 2014, these comics make the 'Sweet As' grade:

COVER OF THE MONTH:  DAVE JOHNSON  DEADLY HANDS OF KUNG-FU #2 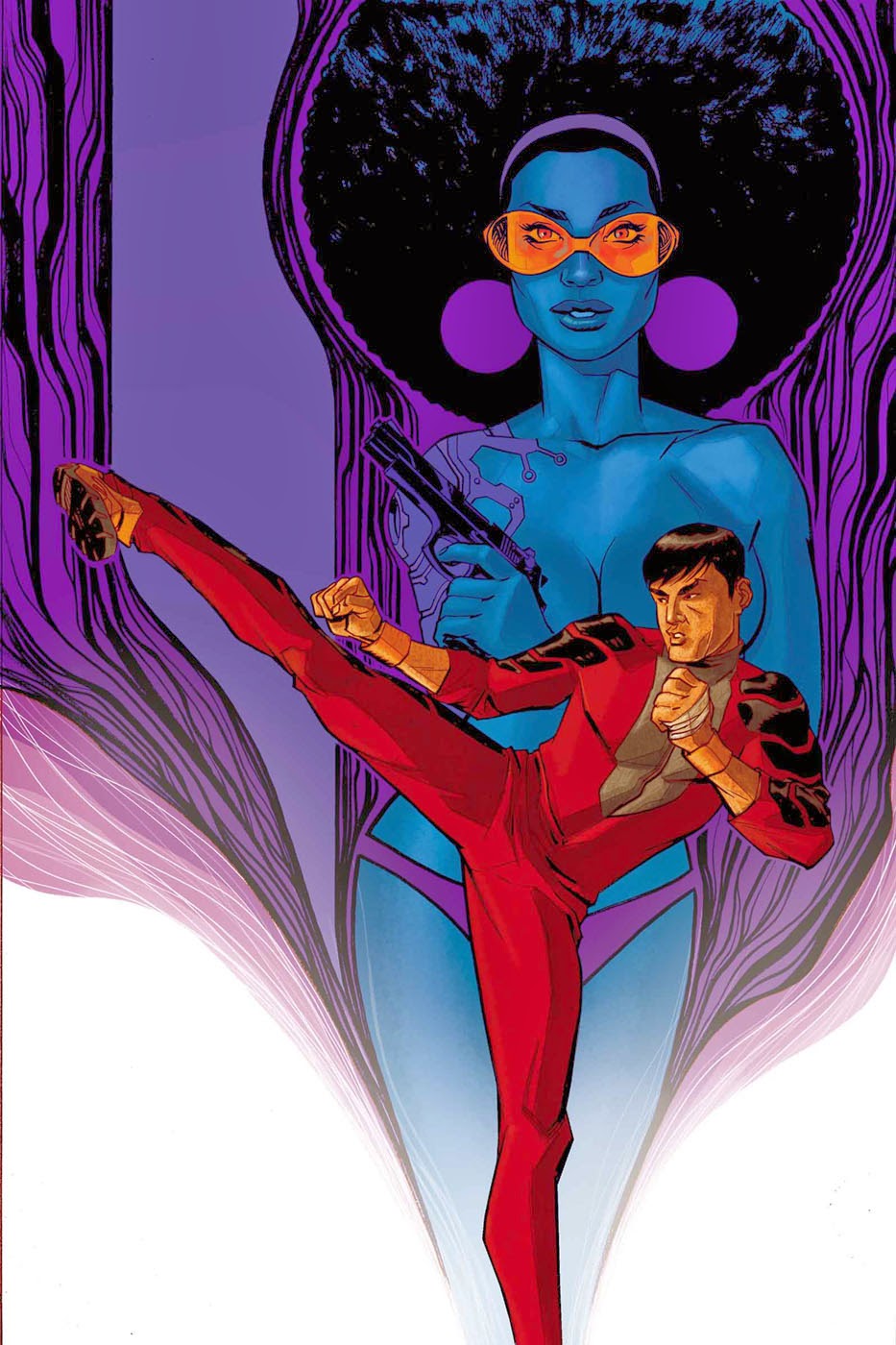 As much as I dig Shang-Chi as a character, there are few times I see a Dave Johnson cover I immediately didn't want to frame and hang on a wall. Here included. He was marvel's MAX guy for a while, but as Chi and Misty show here, it is Marvel Knights that really prove his stripes (Can we just get Shang back in his classic duds?)

Marvel says: Shang-Chi versus mystical kung-fu masters in the streets of London! With a little help from The Daughters of The Dragon! Terrible truths about Shang's fallen comrade revealed! (W) Mike Benson (A) Tan Eng Huat

FANTASTIC FOUR #6 Original Sin Tie-In. No cover given. Everybody has one... (W) James Robinson (A) Leonard Kirk

ALL-NEW INVADERS #6 Original Sin Tie-In. No cover given. Everybody has one... (W) James Robinson (A) Marc Laming

NEW WARRIORS #5 AND #6 (W) Christopher Yost (A), Nick Roche
Issue #5: With half the team trapped in the bowels of Wundagore Mountain, the rest of the all-new New Warriors deal with the bar scene in Prague! A look inside the mind of happy go lucky Speedball, the most hated man in America.
Issue #6: The All-New New Warriors announce their arrival to the rest of the world, which doesn't make anyone particularly happy. The Avengers vs. the New Warriors! And who's the power behind the High Evolutionary?

IRON FIST: THE LIVING WEAPON #3 Ninja nurses versus killers in suits! Our villain's face revealed, and it's one terribly close to Danny Rand's heart! (W and A) Kaare Andrews 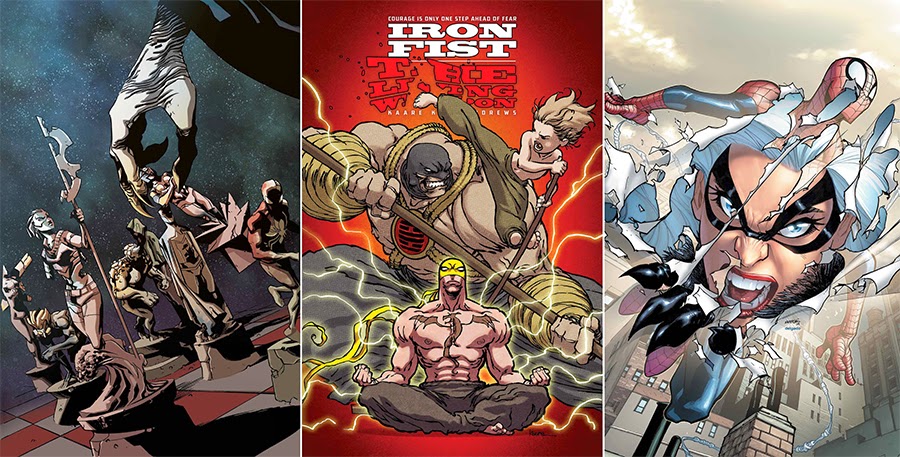 SOUNDS LIKE AWESOME  AMAZING SPIDER-MAN #3 Because of her last encounter with Spider-Man, Felicia Hardy lost everything. Now the Black Cat is back, and she doesn't want any apologies or excuses... just REVENGE. Plus: Spidey teams up with a real hero, fireman Pedro Olivera... who just happens to be the current boyfriend to one Mary Jane Watson. And... more on you-know-who from the opening scene in ASM #1.

UNDER THE RADAR  THUNDERBOLTS #27  The Punisher vs The Thunderbolts Part1. The creators of The Thrilling Adventure Hour and writers of the 2013 Thunderbolts Annual, take control of the TBOLTS... AND TEAR THEM APART! Guest-starring The Avengers! (W) Ben Acker and Ben Blacker (W) Carlo Barberi 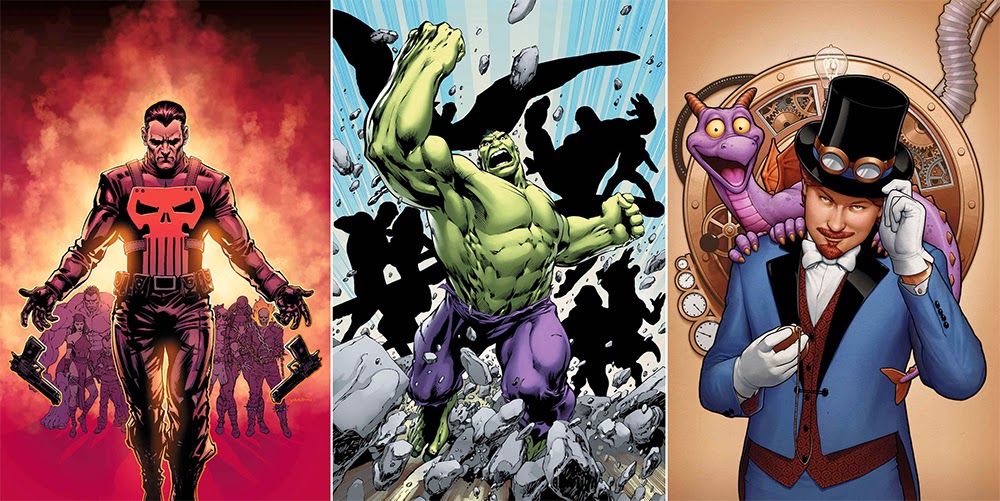 SAVAGE HULK #1 Alan Davis writes and draws a blockbuster story pitting the HULK against... the X-MEN!?!?! Learn the startling secret of Professor Xavier's connection to Bruce Banner! Guest starring the Leader and the Abomination! (W and A) Alan Davis

FIGMENT #1 Dive into a steampunk fantasy story exploring the never-before-revealed origin of the inventor known as Dreamfinder, and how one little spark of inspiration created a dragon called Figment. Who is Blarion Mercurial? What is the Integrated Mesmonic Spark Convertor? Find out as we give a Marvel spin to the mind-expanding theme-park attraction, Journey Into Imagination! (W) Jim Zub (A) Filipe Andrade

What do you think?  For the full list of Marvel's June 2014 solicitations, click the jump.
Posted by IADW at 10:32 am