LEST WE FORGET: Put the 'BOOM!' Back In Thunderstrike

Despite having a first class ticket to ride, some of comics best miss the train and often get left to aimlessly wander the platform, all but forgotten. In Lest We Forget, I pluck a limbo-lingerer's need for a comeback. Today, it's Marvel's 'Everyman Avenger': Thunderstrike.

While the word Avenger today means guaranteed sales, in the 90's it wasn't so. Back in the days of The X-Files and Boys II Men, DC was earning plenty of hype for 'replacing' many of their main icons with heroes for the next generation. Flash, Green Lantern, Green Arrow and Robin leading the charge. With all the hype at Marvel focussed on the X-Men of the time, few headlines were written about the fact The House of Ideas was also quietly and assuredly doing the same to Captain America, Iron Man and Thor.

U.S.Agent is now a paraplegic drill-sergeant in Thunderbolts, War Machine has a new solo title under the stupid moniker of Iron Patriot, but Eric Masterson, aka Thunderstrike is dead and his son tried to host his mantle in a worse-than-death mini-series. Kevin needs to return. 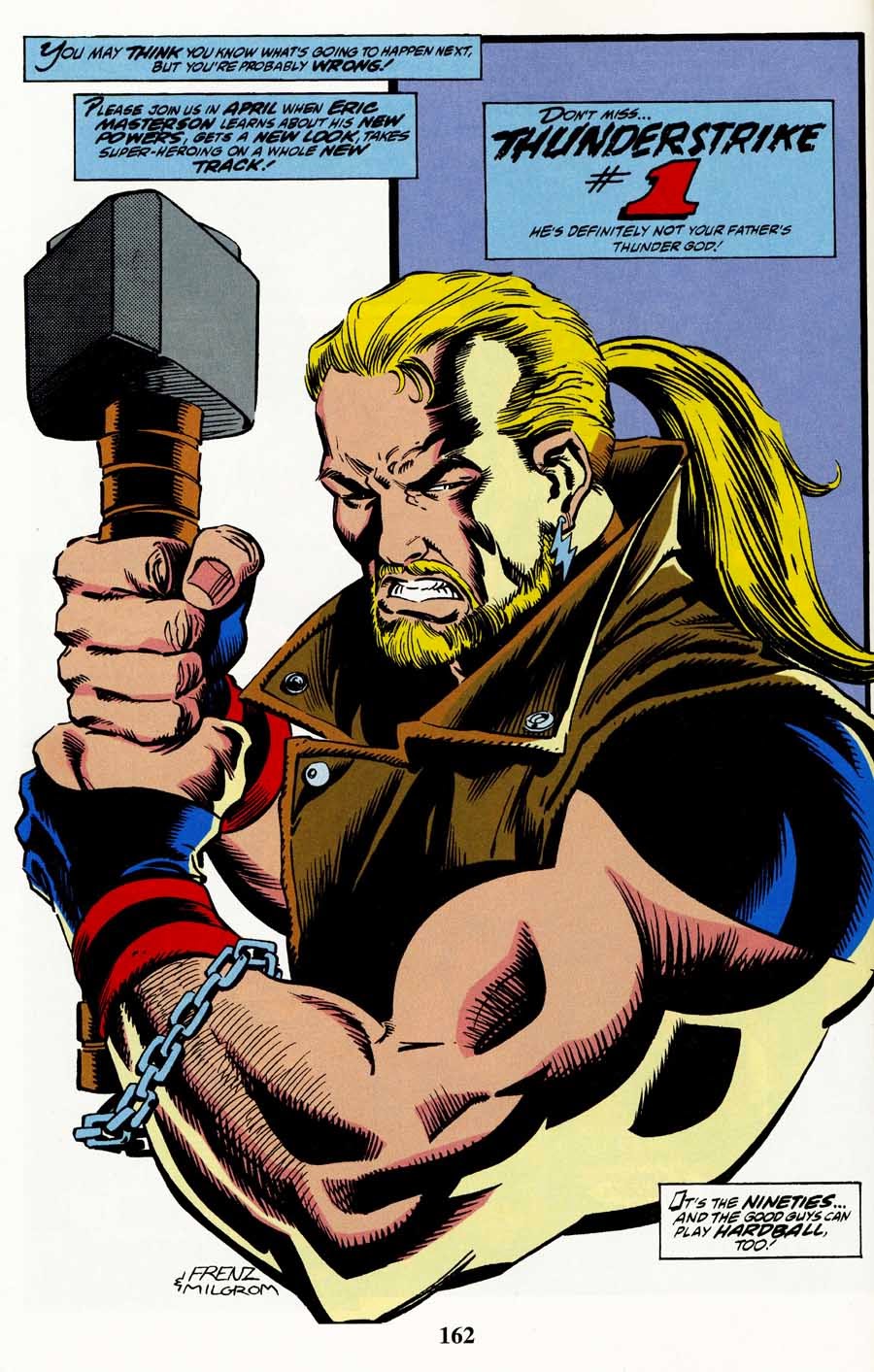 WHY HE IS COOL: The World Still Needs Heroes
Darkhawk and Sleepwalker were my two top solo title Marvel heroes of the 90's, but sitting just off to the left of the podium was Eric Masterson. The man who lived in the shadow of Thor, one both placed on him by the public and by his own feelings of unworthiness. Balancing being a father with overcoming the idea the natural hero inside him had to measure up at all, was typical Marvel stuff, but handled by Tom Defalco and artist Ron Frenz (inked by Al Milgrom), it was lightning in a bottle here.

The one-time Thor and Avenger, Eric had a wicked take on the classic Thor costume, but always felt like a fifth wheel. Taking the name 'Thunderstrike', he swapped cape for a 90's leather jacket, hammer for a mace, and finally clicked in place.

Plastered upon the covers was the catchphrase 'The Everyman Avenger' - which isn't a title that ramps up the excitement levels in many teenagers - yet despite this, this was what made Thunderstrike soar. On panel, he refused the Asgardian trappings of his idol's lifestyle in order to tackle things like guns in school and the ongoing mystery that one of his closest friends had been corrupted and turned into his arch-rival, Bloodaxe.

As the Bloodaxe tension built through each issue, its finale is still one of the best 'ways to go out' I've ever read, and I'm continually surprised it rarely ranks when comparing sacrifices made in comics. If you haven't read it yourself, trust me, you should. It's a doozy.

HOW I'D GET THUNDERSTRIKE MOVING AGAIN: I'd kick off a Marvel Knights type imprint, where four of Marvel's 90's hits returned for a guaranteed 12 issues. Darkhawk, Sleepwalker, Thunderstrike, and Gambit - because lets face it, he hasn't been the same since either.

Eric's mantra would remain the same. Turning his back on the God's to save yours, and you know what, I'd keep the leather jacket too.