FACE-OFF: The Top 9 Wonder Woman Artists Ever (Up Until Now)

Next time I do this, someone shoot me - in the head. I've done a few 'Top 6 Artists' posts before on various characters, but not one as iconic as Wonder Woman. She's no mere mutant or marvel, she is one of the most drawn faces comics have ever created. Brian Bolland, Mike Deodato, Jack Kirby, Nicola Scott, Don Heck, and George Perez show, just grabbing random artists from her past make for a decent half dozen.

9) Matthew Clark I dug Matthew Clark's Wonder Woman like nothing else. He nailed her stern gaze, made the armour look like armour, and really went unsung for his efforts. That said, he's my spot #9 (sorry George).
8) Jose Luis Garcia-Lopez Any Top Artist list on a core DC character that does not feature this man, is not a list. His look is the iconic visual standard of the publisher. Wonder Woman, one of the best examples of that fact.
7) Jim Lee When Jim drew Diana in Superman, with writer Brian Azzarello, he perfectly combined amazonian dress with super-hero flare. Even here, stripped to the latter, there can be no mistake about where she comes from.

6) Adam Hughes Please, do you even need to ask? Just look? He combined three Wonder Women in one picture and each one of them is flawless. It makes me jealous and sad we'll see him on interiors all at the same time.
5) Alex Ross Another rhetorical choice, few have done for the character what Alex's passion for the princess has. I love the size he gave Diana! I never get artists who give Diana 'Britney' arms and shoulders. She's an Amazon!
4) Jae Lee Currently proving he still has a knack with the character in the pages of Superman/Batman, Lee's eerie style brings a haunting air that really suits the mythological yet modern environment Diana walks in.

2) Phil Jimenez This surprises me. Phil is one of the two artistic inspirations I have. Up until today had you asked me 'Who is your top Wonder artist', I would've shoved you for being silly and cattle-branded his name across your forehead. But after staring at too many Wonder Woman comics tonight, he places in spot #3.
2) Chris Bachalo It may only have been trading card art, but everytime I stare at this picture of Wonder Woman I want to know what happens next and b) who she's dead eyeing. If Chris could launch a career with Death, with Hades, he could do even more.

Who is the 'number one' artist?  You'll have to click here for that...

1) DREW JOHNSTON  Drew lands the top spot with a woman who has a natural warrior's frame, lying more on the amazon than super-hero side of the scale. Best of all, she looks like a woman. If I pick up a book and Diana looks in her late 20's, it's instantly a no-sell. Drew's Diana was crisp, yet rugged, built, yet tender and stern yet fierce. Everything a good Wonder Woman should be. 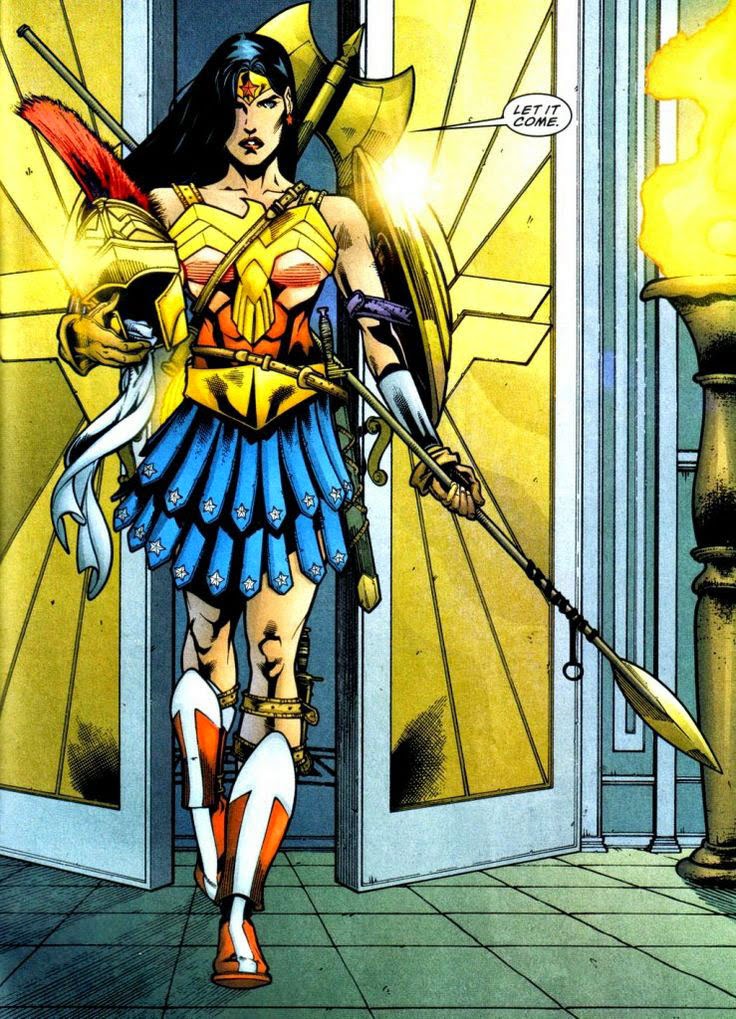