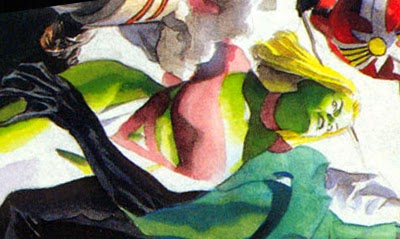 This week, it's a track I hunted out after reading an interview with Andy Partridge that led with "How I ached as a kid to go to the bottle city of Kandor.” Picking Brainiac as a "wonderful psychedelic subject" the band created this song and character, which was later honoured by a few panels in DC smash mini-series Kingdom Come.

"So I reach to hold her frozen hand in flight, as we alight in the bottle city of Kandor.
Brainiac's Daughter, talks like a Daily Planet reporter.
Sitting cross legged there on the mat, oh yes, Brainiac's Daughter"