So someone slept with someone at Warner Bros, and while the WB employee was blindfolded and in cuffs, the secret spy slipped the movie giants DC movie plans out onto the internet. Okay sure, that's not exactly how it happened, but hey I've watched Melrose Place. I know how the world works.

Before my Top 3 thoughts, here's some Alex Ross; 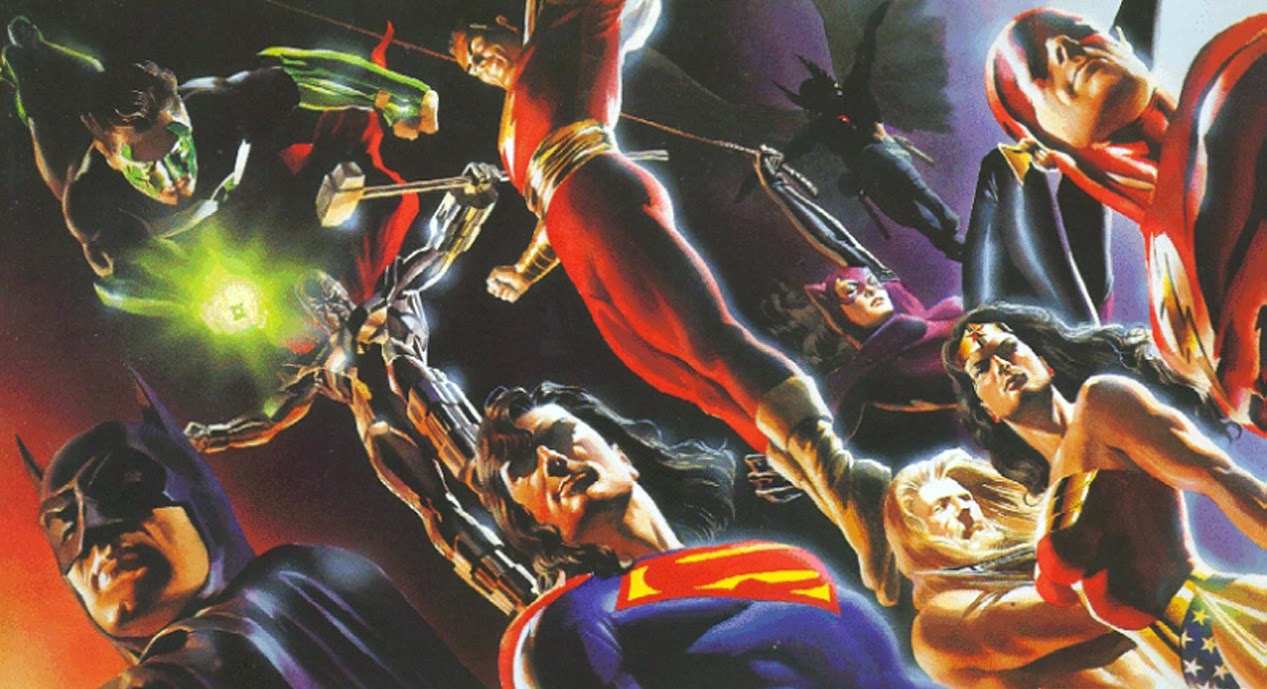 Boy I miss 90's DC. Now to those thoughts I promised... where did I put them? Oh right!

1) While Wonder Woman would usually be the one to get my panties in a bunch, due to some pretty scary plots getting all too close to 'real' recently at the WB for WW, my fan love runs to Shazam instead. Captain Marvel needs a decent shot of renewed public exposure, and whether or not The Rock is still attached, Billy Batson's adventures done right, could easily become a global hit factory, fast as lightning.

2) Where's Aquaman? I think the biggest film of 'wow' either of the Big Two will publish, is the tale set beneath the seas. If it's Aquaman or Namor, an adventure in today's movie possibilities, set beneath the waves can only have one groundbreaker to the modern public, and one imitator. Regardless of comic history, the first one at bat will win that honour - and if true, this list might just have nicked it it from Arthur's grasp.

3) A team-up of DC's scarlet speedster and emerald gladiator released in the red and greenery that is Christmas? Awww Hallmark's already waiting for the card rights I bet. Still, I hope this is Kyle and Wally. With Ryan not reprising Hal Jordan, I think the story of Kyle fighting his idol gone rogue and casting his own shadow is the strongest story left to tell, fit for Hollywood land. Factor in a Flash inheriting his legacy in a more wholesome way as contrast and forget it - it's unique, novel and epic.

4) Sandman - like Wonder Woman, is a film that needs kid gloves. An easy replacement on the WB books for the cash cow that was Harry Potter, Daniel could be the best universe outside a comic universe since The Endless began. Rushed it could just feel endless. First way to separate those two roads; State Neil Gaiman is attached to the film in a decent creative input capacity. No one else will do. Second: give it to New Line. They seem to click with Sandman-esque life a bit more than mainstream Warners.