SWEET AS: The Best From Dark Horse Comics' September 2014 Solicitations

When we Kiwis find something we like, we say it's 'Sweet as'. When I look at Image Comics' September 2014 solicits, these make the 'Sweet As' grade:

COVER OF THE MONTH:  FIONA STAPLES  ALIENS: FIRE AND STONE #1 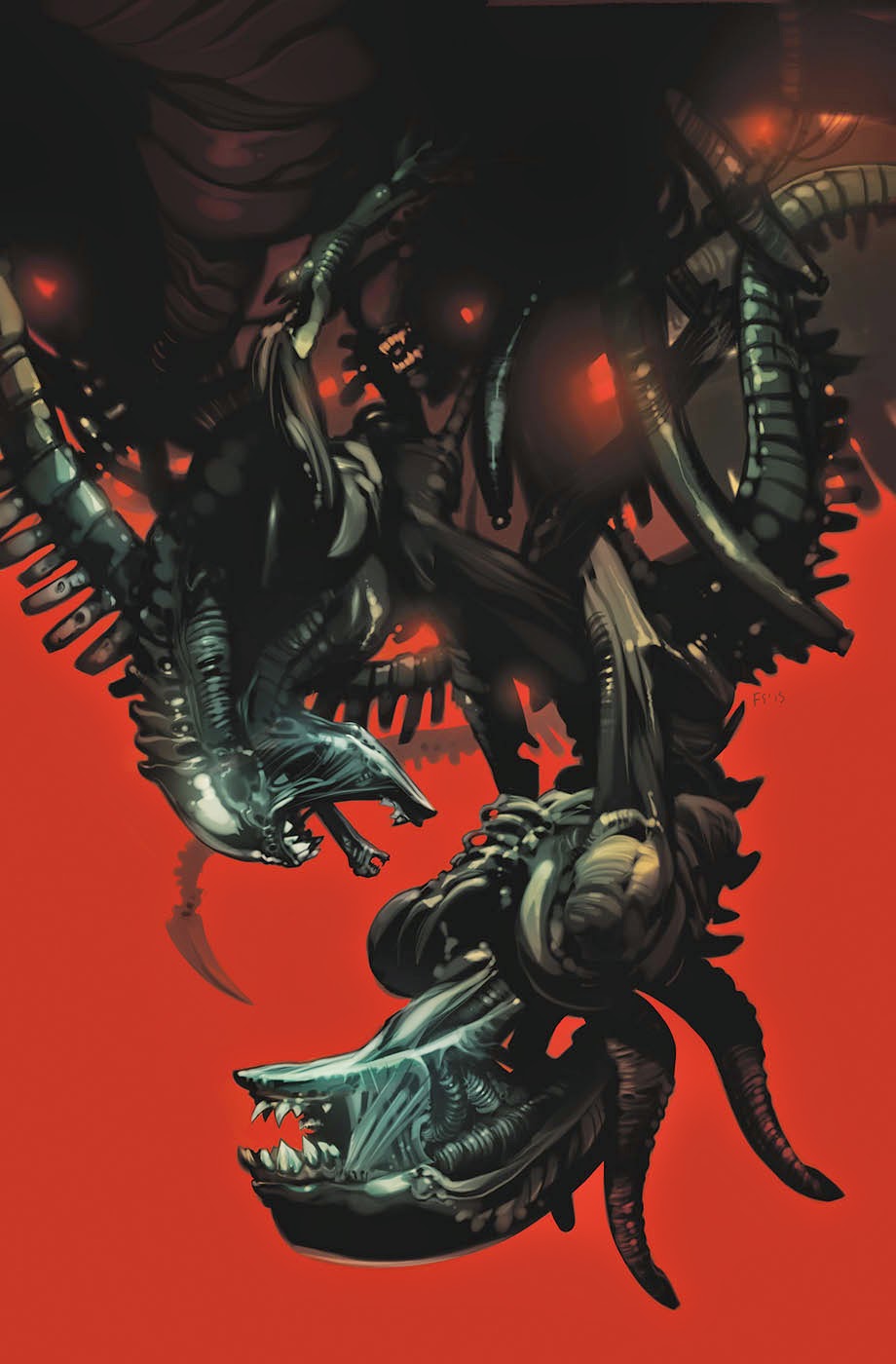 Boy, I've been waiting for Dark Horse to bring these guys back! Part of what lead me to discover Sin City and Hellboy were the Horse's 90's Predator and Aliens comics. Now Image Comics' Saga artist Fiona Staples is doing variants! So here's to acid dripping nasties and the gun-toting prey they munch on!

Dark Horse says: During a vicious xenomorph outbreak, terraforming engineer Derrick Russell leads a desperate group of survivors onto a rickety mining vessel. They hope to escape the creatures overrunning their colony--but they'll face horrors both in space and on the strange planet they crash on. Ties in with the Prometheus and Aliens films! (W) Chris Roberson (A) Patric Reynolds (A), Dave Stewart (C), David Palumbo (Cover),

PROMETHEUS: FIRE AND STONE #1 When the Prometheus never returned from her fateful journey to LV-223, the questions surrounding the origins of man went unanswered. Now a new team of explorers seeks to uncover the dark mystery that holds not only the fate of the original mission, but possibly their own damnation. (W) Paul Tobin (A) Juan Ferreyra

GRENDEL VS. THE SHADOW #1 (of 3) Sparks fly and bullets blaze when the original Grendel, Hunter Rose, is transported to 1930s New York and faces off with the original dark-night avenger, the Shadow! Two pulp-noir icons go head to head in 48 pages! (W and A) Matt Wagner

CONCRETE PARK: R-E-S-P-E-C-T #1 A troubled young outcast from Earth awakens on a distant desert planet that's gripped by gang war. Will the exiles of Scare City destroy each other or create something surprising, beautiful, and new? (W and A) Tony Puryear (W) Erika Alexander 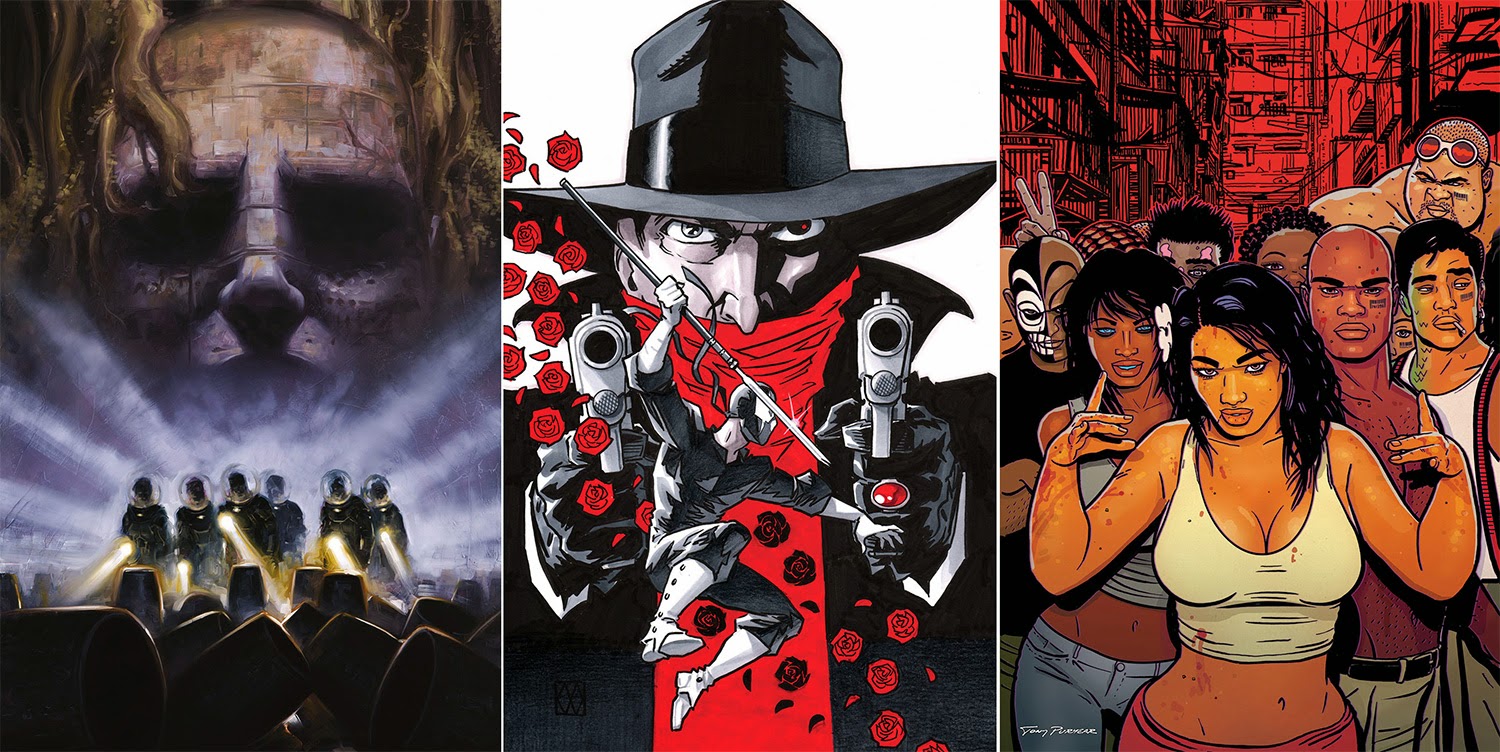 CONAN THE AVENGER #6 The hunt for the witch that stalks the city's shadows comes to its climactic conclusion as Conan and his ally Agara do everything in their power to find out the truth! When this day is done, the capital of Kush will never be the same! (W) Fred Van Lente (A), Eduardo Francisco

TERMINATOR SALVATION: THE FINAL BATTLE #9 The killer Thomas Parnell's control over the Terminator army has brought both Skynet and the human resistance to their knees. With all of John Connor's other allies fallen or displaced in time, only he and the resurrected Marcus Wright remain to stand against this psychotic oppressor! (W) J. Michael Straczynski (A), Pete Woods 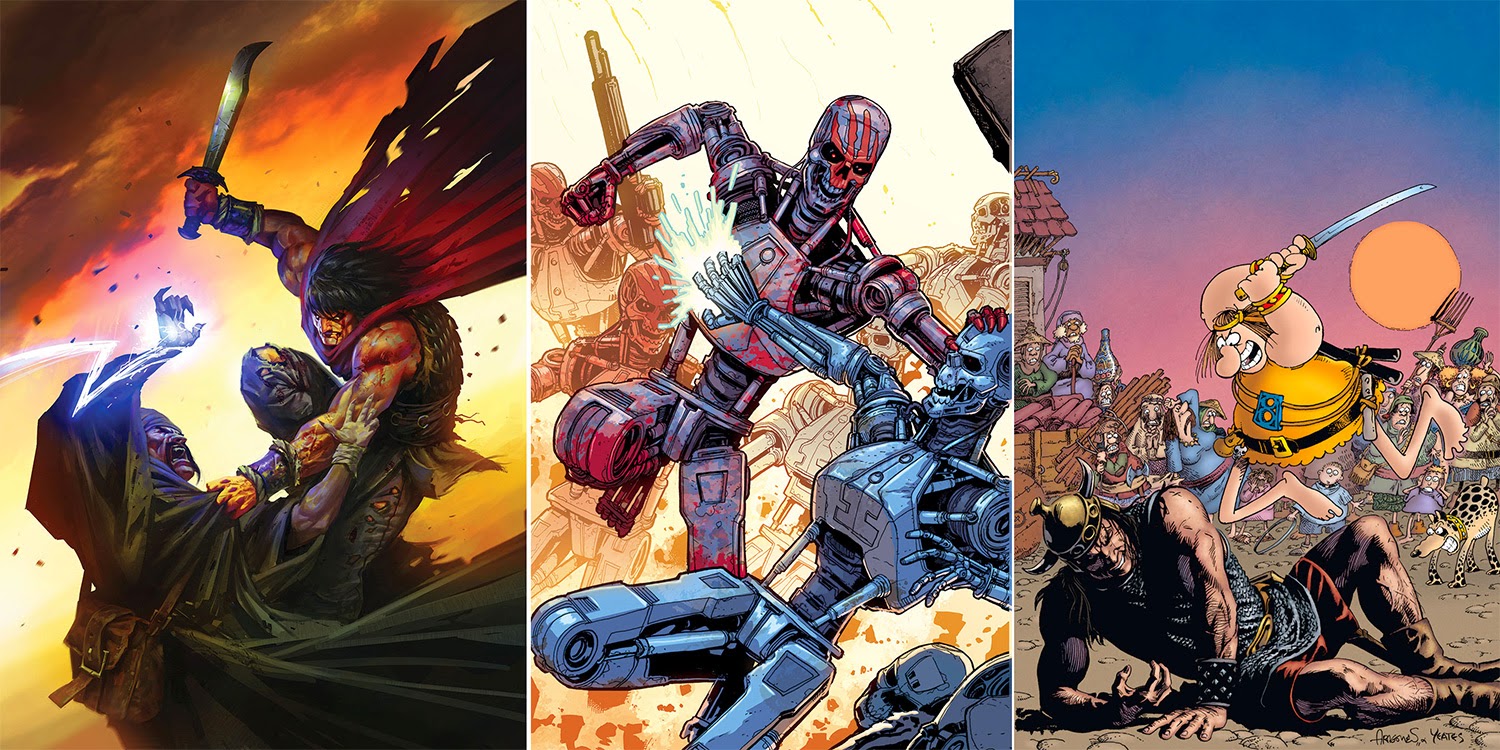 SOUNDS LIKE AWESOME:  GROO VS. CONAN #3 As a brain-damaged Sergio Aragonés wanders the streets, the indomitable barbarian Conan crosses paths--and swords-- with the insufferable birdbrain Groo. Has the warrior that vanquished a thousand wizards met his match? Does Groo even know the meaning of the word defeat? Knowing him, probably not! (W) Mark Evanier (A) Sergio Aragonés

What do you think?  For the full list of Dark Horse Comics September 2014 solicitations, click the jump.
Posted by IADW at 7:39 pm