SWEET AS: The Top 6 From Valiant Entertainment's September 2014 Solicitations

When we Kiwis find something we like, we say it's 'Sweet as'. When I look at Valiant Entertainment's September 2014 solicits, these six make the 'Sweet As' grade: 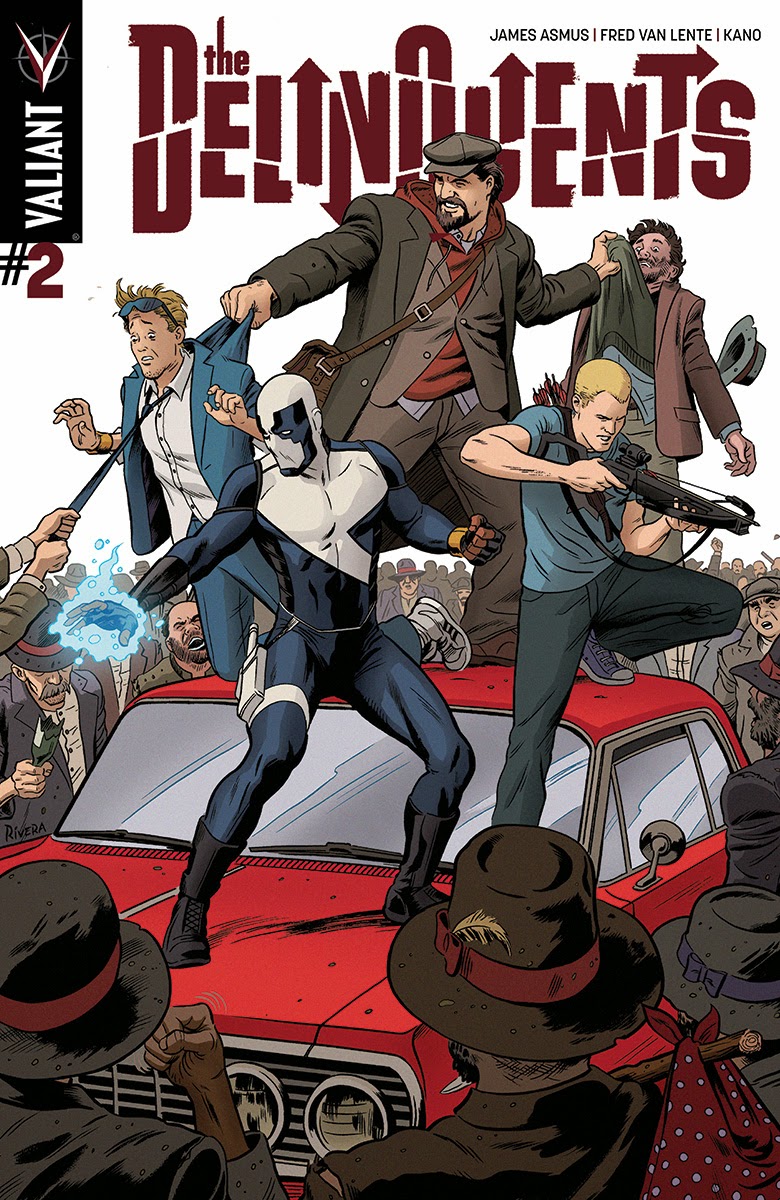 Sometimes it's the simplest comic compositions that work best. Here the ol' pyramid is pulled out so despite the hectic gang scene, the whole image of Valiant's dynamic duo of duo's trapped by the mob, remains easy to read and attractive to the eye!

Valiant says: Well...that escalated quickly. Quantum and Woody and Archer & Armstrong are riding the rails looking for the lost treasure of the Hobo King. Each armed with one half of a mysterious map, these two tandems have unwittingly been pitted against each other in a four-way free-for-all...but can either team get along long enough to achieve their mission? The world's worst crossover joyride is about to enter uncharted territory! (W) James Asmus, Fred Van Lente (A) Kano

ARMOR HUNTERS #4 That was just a battle... Now get ready for the war! X-O Manowar has played the ultimate gambit, and finally leveled the playing field against the villainous Armor Hunters. But the galaxy's deadliest killers haven't come this far just to surrender! Their final charge is now upon us...and it will take the combined powers of X-O Manowar, Unity, Bloodshot and the rest of the Earth's most formidable heroes to save our world from a full-scale cosmic reckoning. (W) Robert Venditti (A) Doug Braithwaite

X-O MANOWAR #29 Armor Hunters: Aftermath! The world has changed for Aric of Dacia -- the armored earthbound hero known as X-O Manowar. Unable to protect his friends and allies from the interstellar hunters sworn to kill him, the Visigoth warrior who would be king now recoils from the horrendous fallout of his actions -- even as a threatening new future looms. Everything changes now! (W) Robert Venditti (A) Diego Bernard 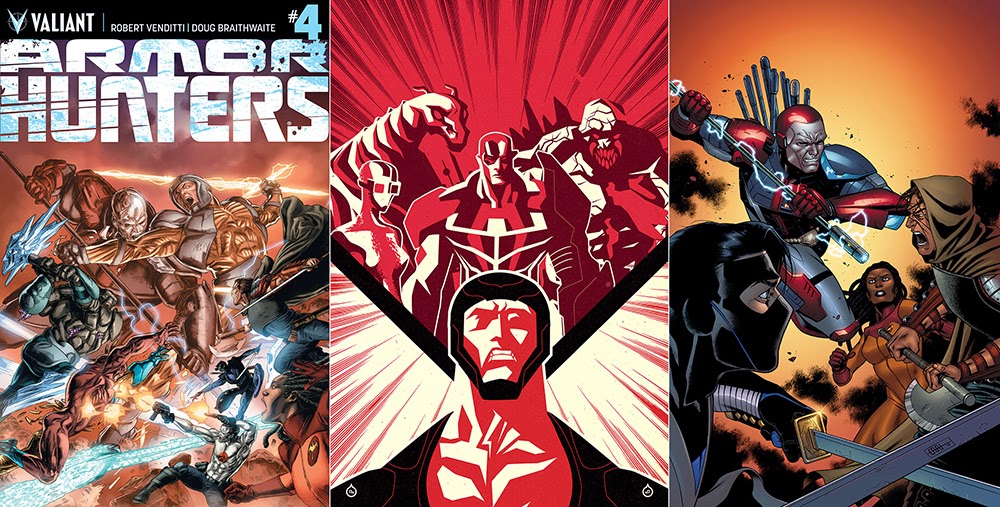 UNITY #11 Last hope. Last stand. In the wake of Livewire's stunning sacrifice, how will X-O Manowar, Ninjak, and the Eternal Warrior comes to terms? With a punishing revenge mission led by Bloodshot, that's how! If it bleeds, they can kill it...and the leaner, meaner Unity team just became a living, breathing box of armor-piercing rounds. The Armor Hunters put Earth in their bullseye... Now, the bullseye bites back! (W) Matt Kindt (A) Stephen Segovia 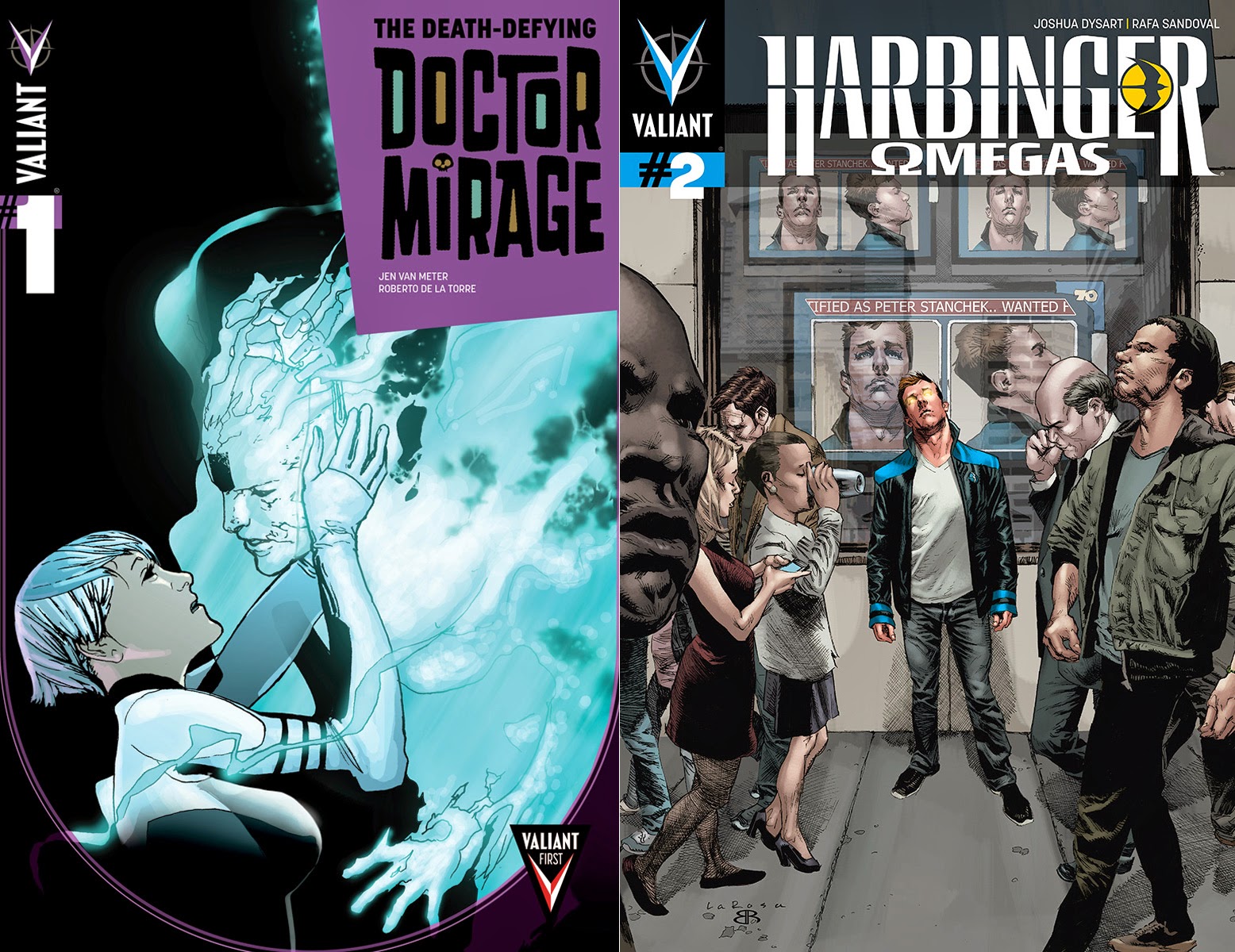 THE BEST OF THE NEWBIES  THE DEATH-DEFYING DR. MIRAGE #1 Death was just the beginning... Doctor Mirage talks to the dead...but the only spirit Shan Fong can't find is that of her late husband, Hwen. Instead, America's favorite semi-retired paranormal investigator is haunted and raw, using her gift to solve homicides and bring peace to the recently bereaved.

But when a big-time occultist with a classified military past hires her for a special job, Shan discovers a lead that might close the greatest mystery she's ever tackled - how to get Hwen back. Now, Doctor Mirage must enter the undiscovered country and cross all the realms of the underworld, if she has any hope of rescuing the man she loves...or be forever lost beyond the earthly plane? (W) Jen Van Meter (A) Roberto de la Torre

SOUNDS LIKE AWESOME  HARBINGER: OMEGAS #2 Toyo Harada strikes back! In the aftermath of the tragic firestorm between the world's most powerful omega-level psiot and his wayward heir, casualties were claimed on both sides. Now, the last remnants of each opposing force -- the Harbinger Foundation and the surviving Renegades -- have been shattered and driven deep underground. But Toyo Harada -- newly exposed as the world's foremost superhuman -- has no one left to stop him...and his greatest work can finally begin... (W) Joshua Dysart (A) Rafa Sandoval

What do you think?  For the full Valiant Comics September 2014 solicitations, click the jump.
Posted by IADW at 7:48 am