WOLVERINE #127 I had high hopes for this. #126 is one of my best Wolverine issues, thanks to writer Chris Claremont and artist Leinil Yu. Sadly instead of focusing on Shadowcat having accepted death in order to save Logan from an enhanced Sabretooth, this issue sees Wolverine use movie props to convince the Hand and Hydra that the Hulk, Avengers and Fantastic Four are in town. Six artists for one issue are just absurd, and before the actual plot returned in the last two pages, I'd long since stopped caring. Oh well, the opening splash makes a cool poster. *****


SENTRY #3 I have loved Jae Lee's art since he drew 'Savage' Namor, and picking up this issue only reminds me why. His haunting art style leaves behind the '3 minute abs' nature of super-hero comics, to perfectly suit one forgotten hero's return to the Marvel Universe. Forgotten by all, but The Hulk.

As Reed Richards efforts to discover The Sentry's truth bring him to the attention of Dr Strange, 'Robert Reynolds' turns to Spider-Man, in the hopes spider-sense will recall his past. Always a master of characterisation, there's not one face writer Paul Jenkins doesn't nail as the web of his plot entwines. Leaving this individual comic from the much-missed Marvel Knights imprint, still a perfect example of what makes a great comic today. ***** 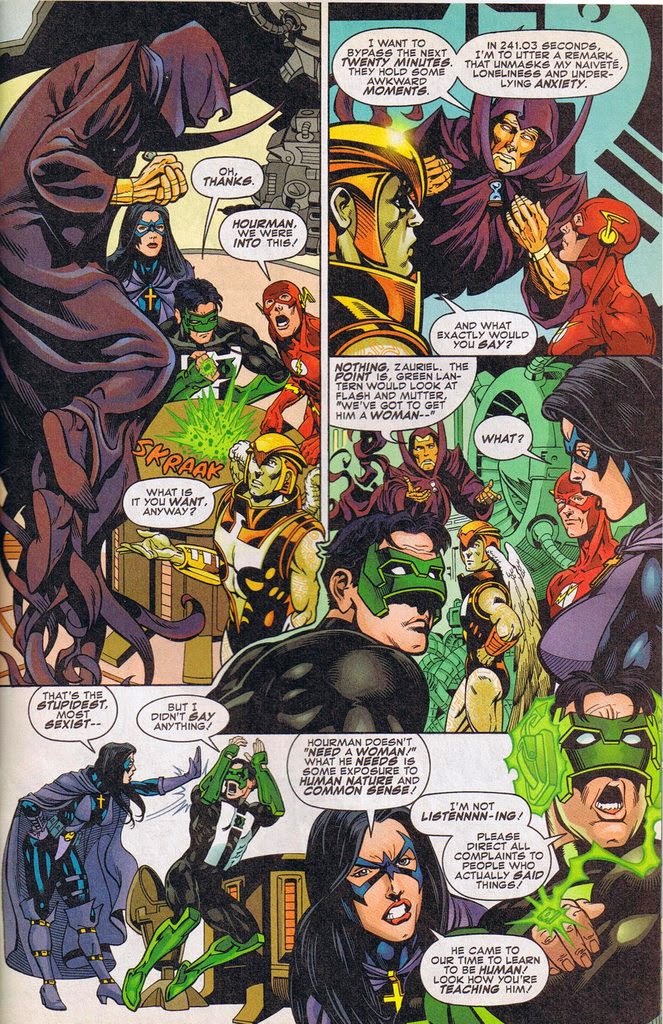 HOURMAN #1 Don't spend a second trying to find something to complain about here. While the JLA taunted on the cover takes the shape of Flash, Green Lantern, Zauriel and Huntress on the interior, the whole issue sings due to two points; writer Tom Peyer's sense of humour; and the way his creativity plays with the concept of a guy who can play Whack-A-Mole with time - popping up anywhere within it.

Taking over a Grant Morrison idea and treading down a whacky road can be dangerous grounds for imitation, but Peyer keeps his distance through the re-introduction of Snapper Carr as the futuristic android's modern day tour guide, and depowering the mechanised installment of the Hourman legacy, way beneath what Grant had previously established.

Even Rags Morales art, which I've always been 50/50 on, clicks perfectly into place here, and bends the pages as time does and Amazo rears his infamous head. *****

X-MAN #59 Maybe the X-Office had an editorial mandate that demanded an utterly useless yearly fill-in issue, like Wolverine had at the top of this pot. I love finding random Fantastic Four guest spots (when they actually get them), but despite an awesome scene between Nate and Franklin Richards, this issue rarely makes sense - an aspect X-Man even comments on in-panel, before a cliffhanger gets awkwardly inserted. Avoid. *****