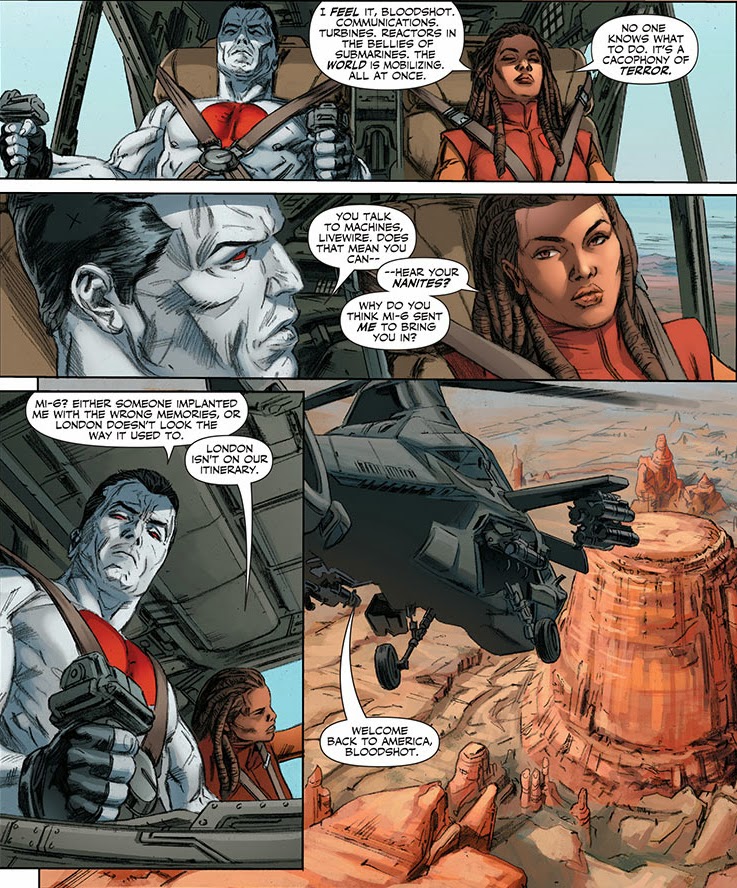 It's been a wee while since I dove into my pull list and cheered what's working great, separating it from what needs a kick and what needs a shove. Pulling three books at random, and writing a bullet review on each, here's what caught my eye in the last few weeks.

While having H.A.R.D. Corps in his own title diluted the waters a bit, in Harbinger Wars he stole the show, and in Armor Hunters, he's doing the same. Not only does the issue's last page scream 'make me into a poster', pairing the woman who speaks to machines with a man made of nanites is one of the best ideas Valiant has had so far - and that's saying something. 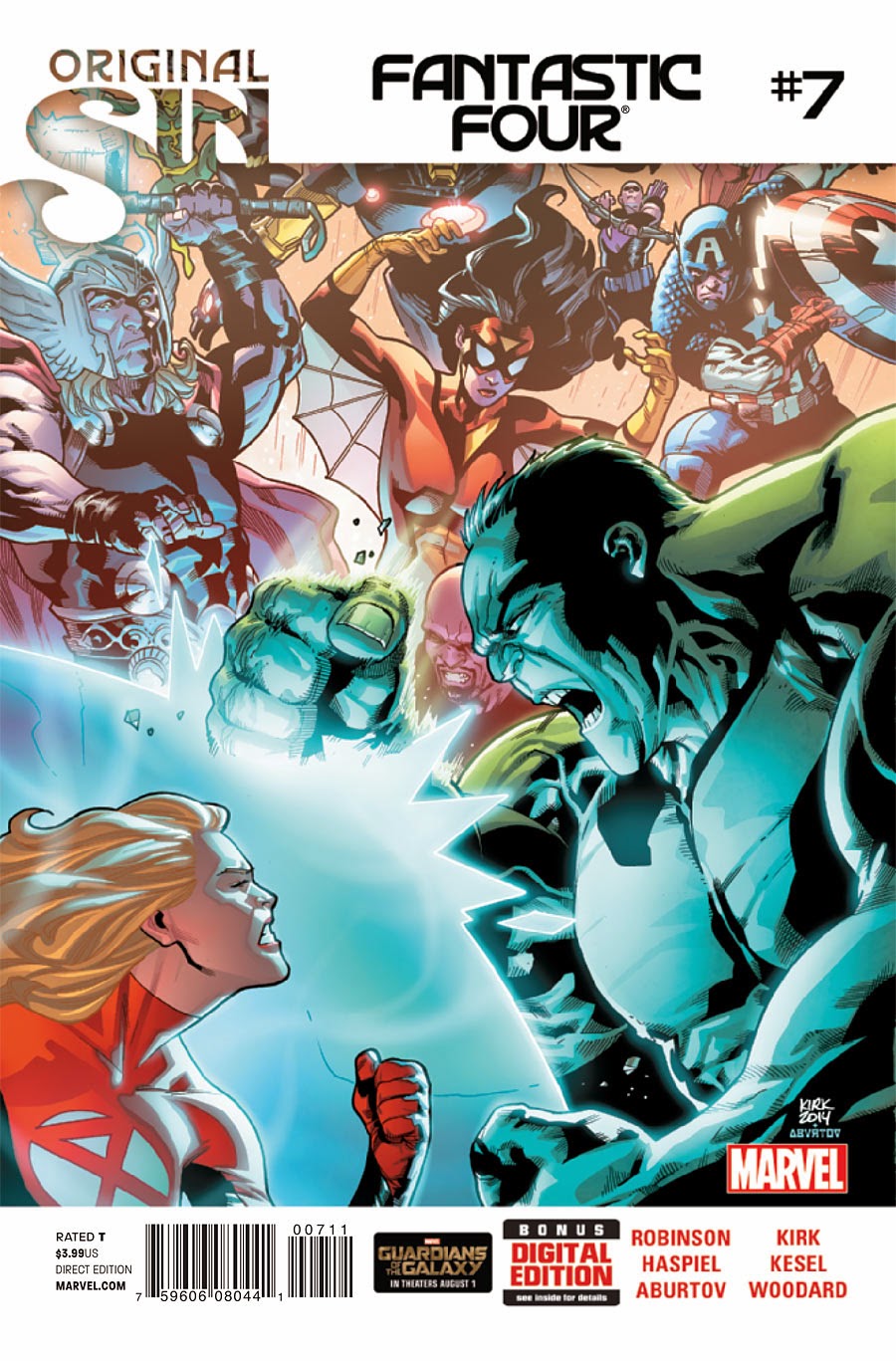 SORRY IT'S COME TO THIS: FANTASTIC FOUR #7
Last month I cancelled the All-New Invaders (despite the team being one of my all-time favs), and now I have cancelled arguably my true all-time favourite team title, The Fantastic Four. Leonard Kirk's art has been stunning and combined with the inks of Karl Kesel - one of comics most underrated talents and workhorses - their pages are almost worth the price of admission. Sadly, the writing is not.

Like writer James Robinson's All-New Invaders, Fantastic Four's events drag or jump in bizarre ways. The Original Sin tie-ins star a 'revelation' that seems both blown out of proportion and more than a little been there done that for this book, while the Avengers taking on a solo Invisible Woman gets criminally glossed over despite the cover, so a court case against Reed Richards can rabbit on for ages.

After all the hype I had for both books under James's run, I'm left hoping Namor and Thing get solo series soon as part of the Marvel onslaught, so I can still have a taste of each team, without reading the drag of the actual monthlies.

COMIC OF THE MONTH: THE SANDMAN: OVERTURE #3:
Neil Gaiman is like the liquid terminator at the end of T2, as it is dropped into liquid metal, and shifts through all the identities it assumed during the film in a short space of time. Throughout this book Neil is lyrical, metaphorical, cosmic, romantic, depressing and insightful. While trapped in the moment of either stage it can seem disjointed from the last, it still unites by the end page to form an amazing comic experience. 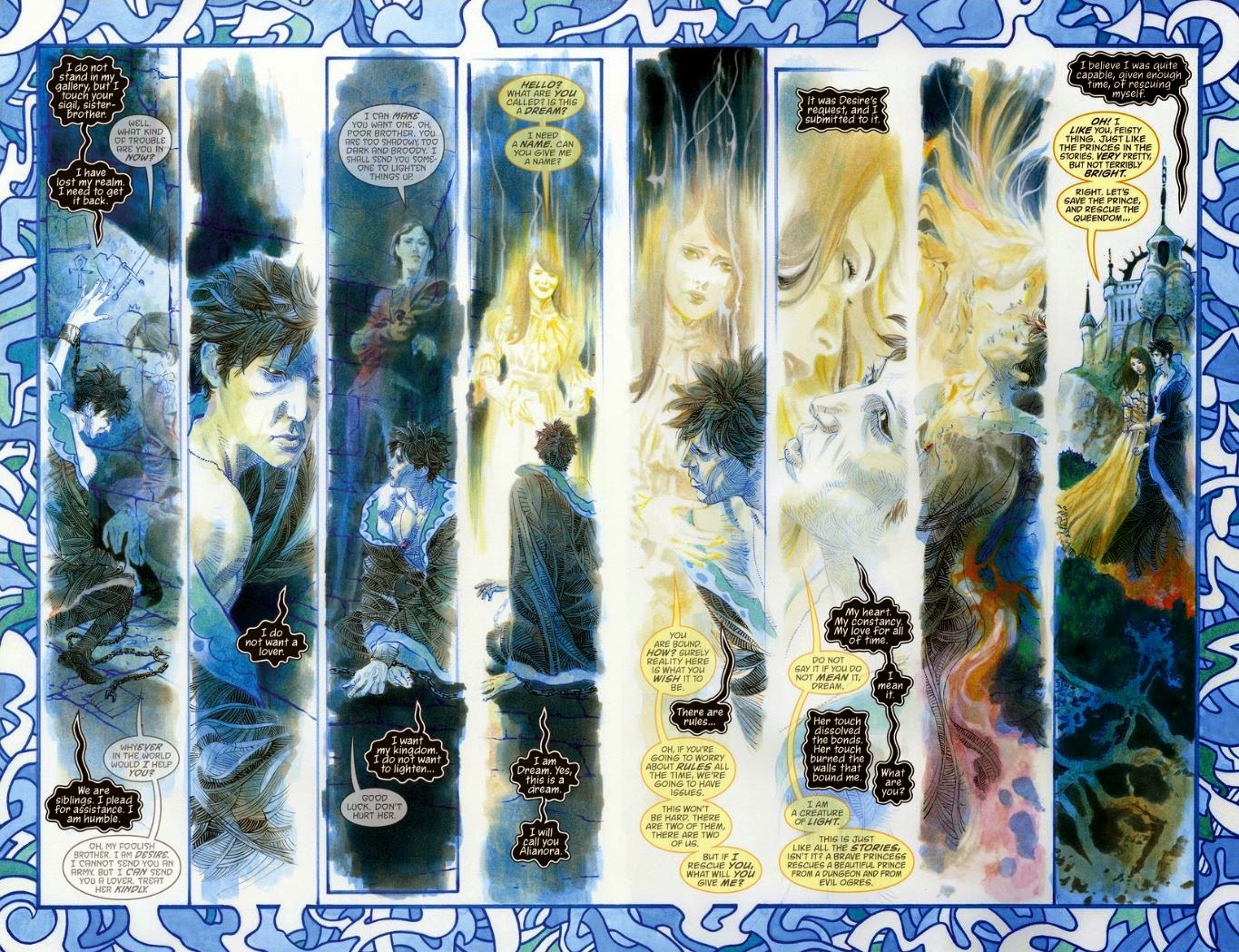 From Jack Kirby-ish galactic swarms of beetles to giants holding up bridges over time and space, from cat reflections of Daniel's inner-self to the truth behind the first love his heart ever burned for (Alianora for you Sandman: A Game Of You fans), what makes the reader writhe like the T-1000 is J.H. Williams III's art. He shifts style with every scene and yet makes it seem cohesive at the same time. His layouts are as crazy cool as always and the eye of his imagination knows no bounds.

What were your hits of the month?
Posted by IADW at 7:51 pm