SWEET AS: The Top 6 From Marvel Comics' November 2014 Solicitations

When we Kiwis find something we like, we say it's 'Sweet as'. When I look at Marvel Comics' November 2014 solicits, these six make the 'Sweet As' grade: 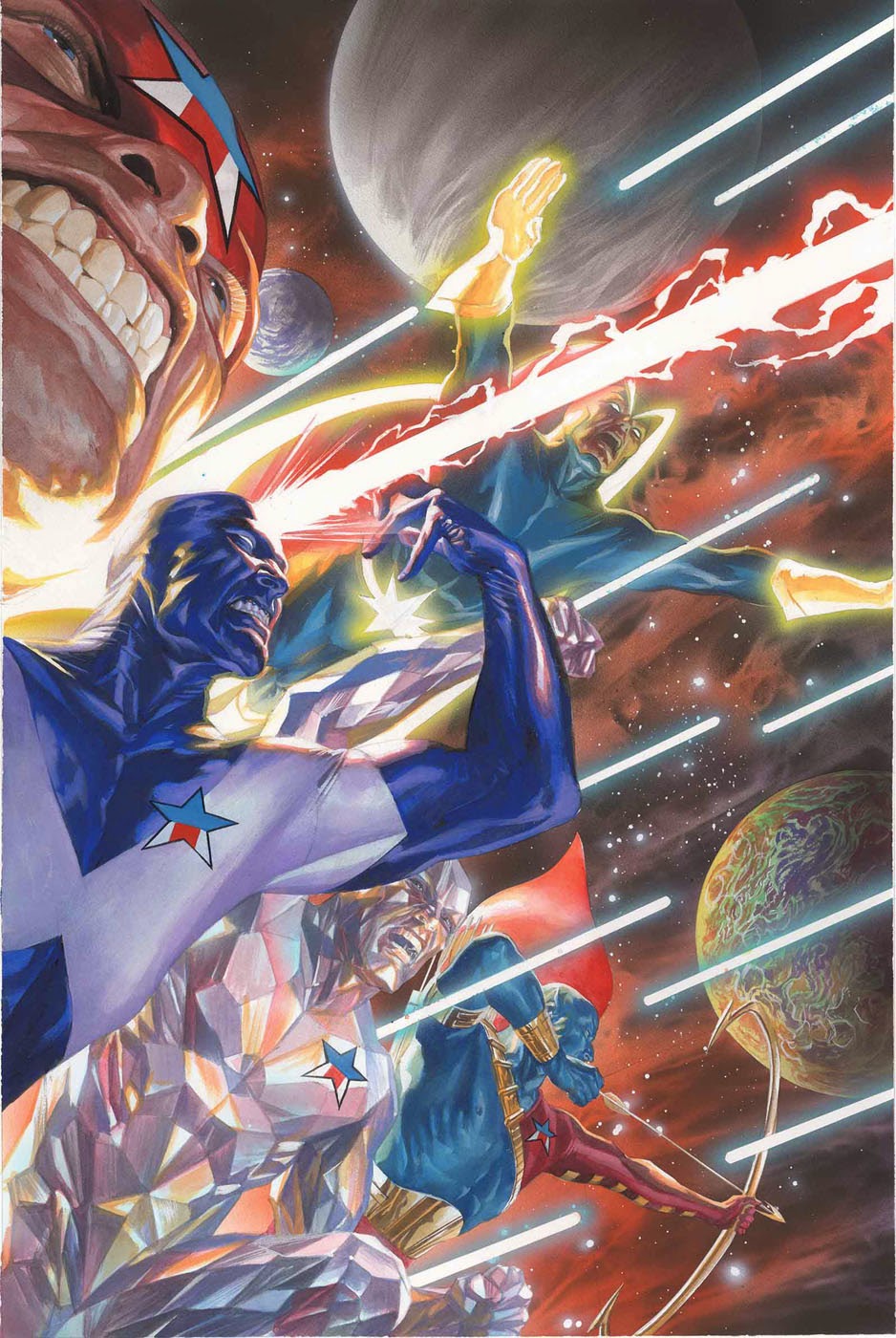 Ever since Force Works, everything Dan Abnett's writing has set my senses ringing like a Bat-cave full of Bat-phones (or whatever the Marvel equivalent is). Now he's adding Galactus and the mohawked 'superman' himself, Gladiator, to the debut arc of the original Guardians of the Galaxy series. Oh yeah, it has an Alex Ross cover. One of them never hurts either.

Marvel says: The Guardians and their reluctant cosmic allies find themselves caught in a deathtrap ambush... but who is out for their blood? And with time collapsing, do they stand a hope of surviving? Guest-starring Gladiator of the Shi'Ar, the "original" Star-Lord, and an all-new Herald of.... you know who! $3.99 (W) Dan Abnett (A) Gerardo Sandoval

JUMP ON HERE:  SPIDER-WOMAN #1
New Ongoing Series/Spider-Verse Tie-In! Jessica Drew has been an agent of S.H.I.E.L.D., and agent of S.W.O.R.D., an Avenger and so much more. But nothing could prepare her for the multidimensional insanity that is Spider-Verse!

A war is brewing, and every spider-character in the multiverse is a target! But being a target is something Jessica Drew just won't abide. She's a woman with a mission and with Silk, the newest spider-character on the block at her side, she'll have to put all her training to the test if she wants to make it out of Spider-Verse alive! $2.99 (W) Dennis Hopeless (A) Greg Land 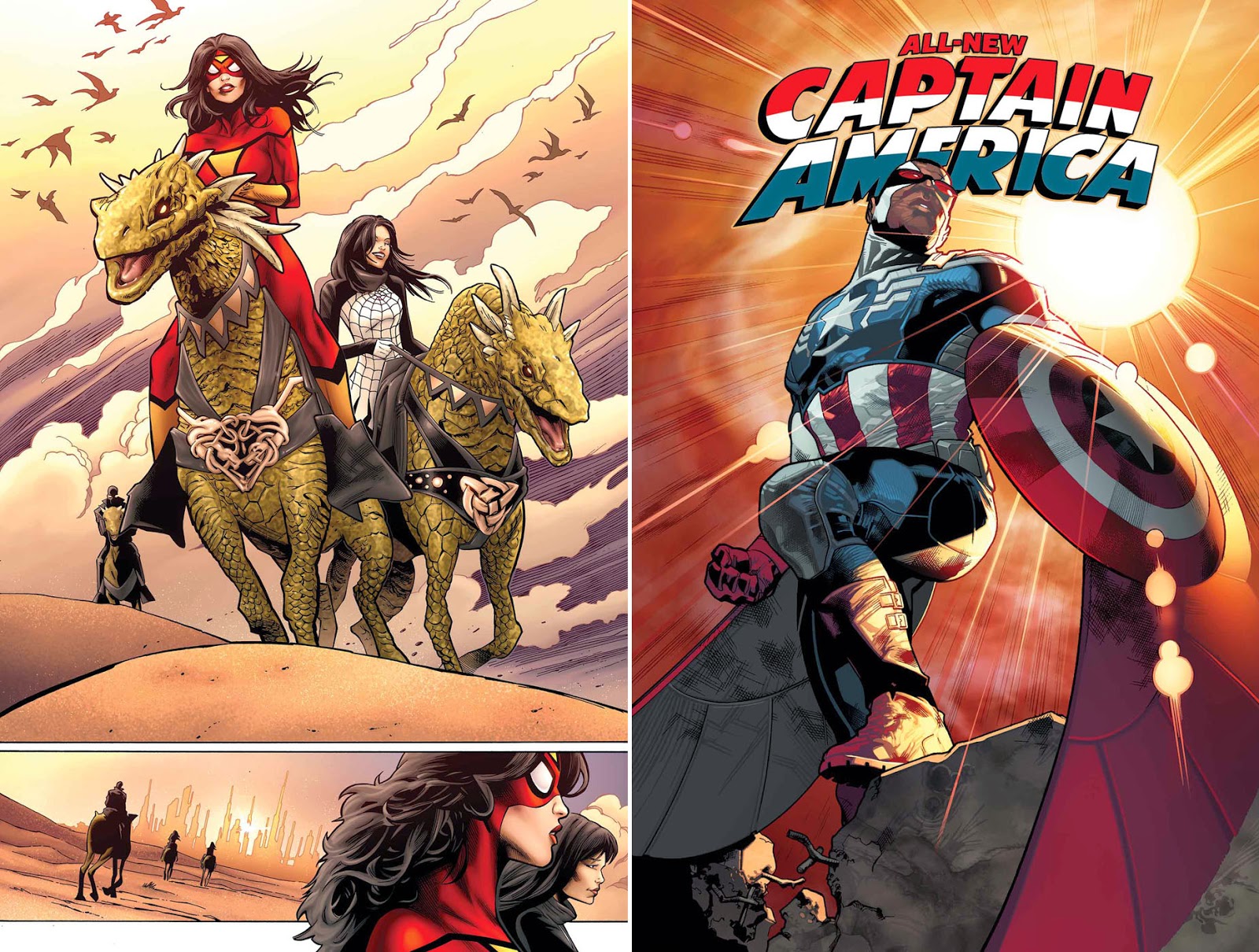 SOUNDS LIKE AWESOME
ALL-NEW CAPTAIN AMERICA #1 This is it! The all-new, Spy-Fi, high-flying adventures of Sam Wilson Captain America and Nomad begin here! Hydra is growing, the terrorist band have has infiltrated the Marvel Universe completely! But what is their ultimate goal? United by Hydra, Cap's rogue's gallery gathers to take down the new untested Captain America and Nomad! $3.99 (W) Rick Remender (A) Stuart Immonen

NEW WARRIORS #12 Series finale! It's been a hard road for the New Warriors, and after fighting the Evolutionaries, and saving the planet once or twice, things reach their shocking conclusion! After months of battling, the New Warriors finally find some measure of peace, but will it last? (W) Christopher Yost (A) Marcus To $3.99.

FANTASTIC FOUR #13 The rebuilding of the FF starts here, with the return of the blue uniforms! Can The Thing and Sandman escape from super villain prison? Camp Hammond attacked and the Future Foundation kids kidnapped...by Thor? (W) James Robinson (A) Leonard Kirk $3.99.

SPIDER-MAN 2099 #6 Spider-Verse Tie-In! Picking up where Amazing Spider-Man #10 ends, Miguel O'Hara is finally back in the year 2099! But no time for nostalgia! Spider-Man 2099, Lady Spider, and the six-armed Spider-Man are on the run for their lives from the dangerously ravenous Inheritors! (W) Peter David (A) William Sliney (A), Francesco Mattina (C), $3.99. 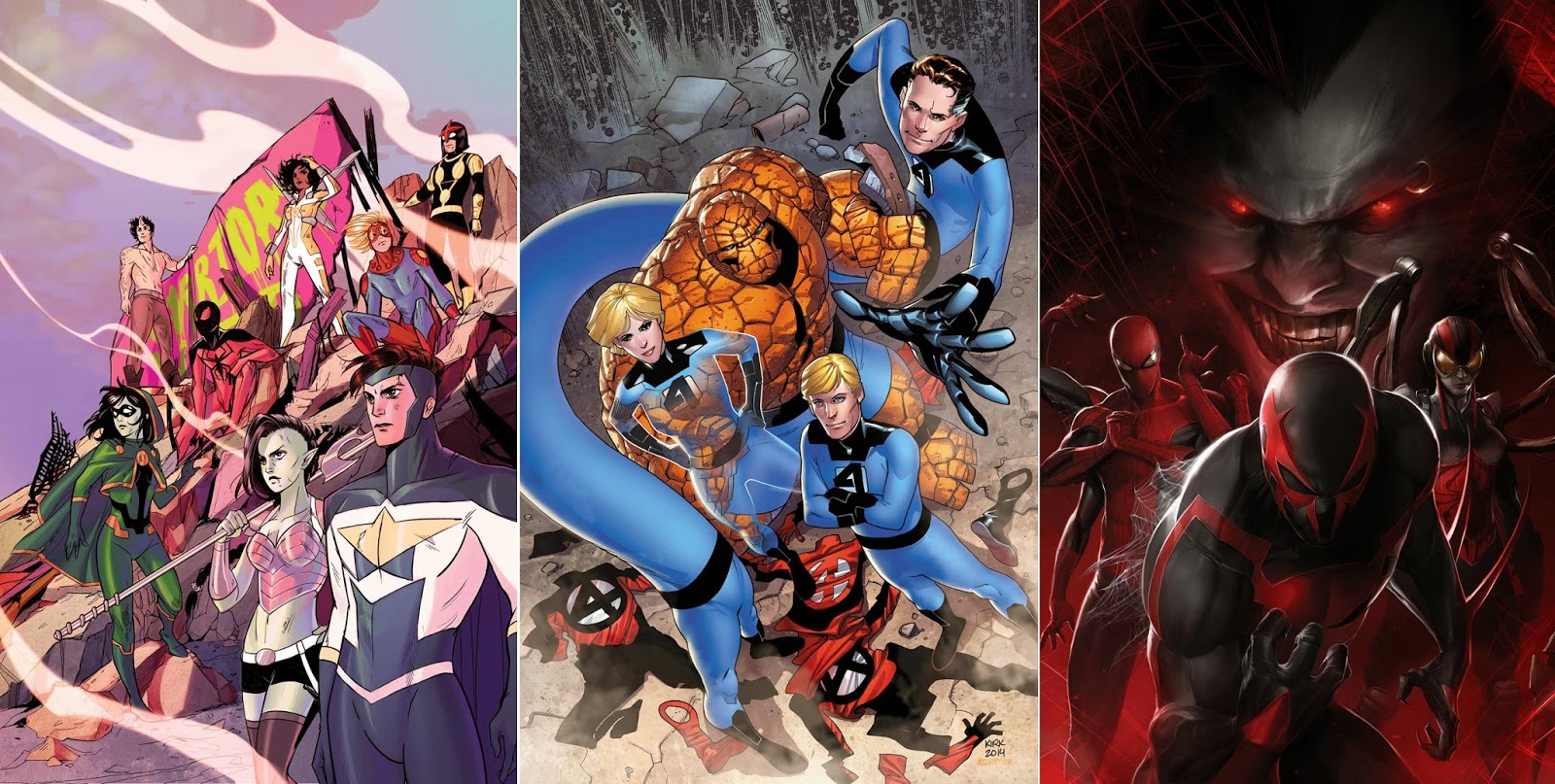 What do you think? For the full list of Marvel Comics November 2014 solicitations, click the jump.
Posted by IADW at 6:49 pm