SWEET AS: The Top 6 From Valiant Entertainment's November 2014 Solicitations

When we Kiwis find something we like, we say it's 'Sweet as'. When I look at Valiant Entertainment's November 2014 solicits, these six make the 'Sweet As' grade: 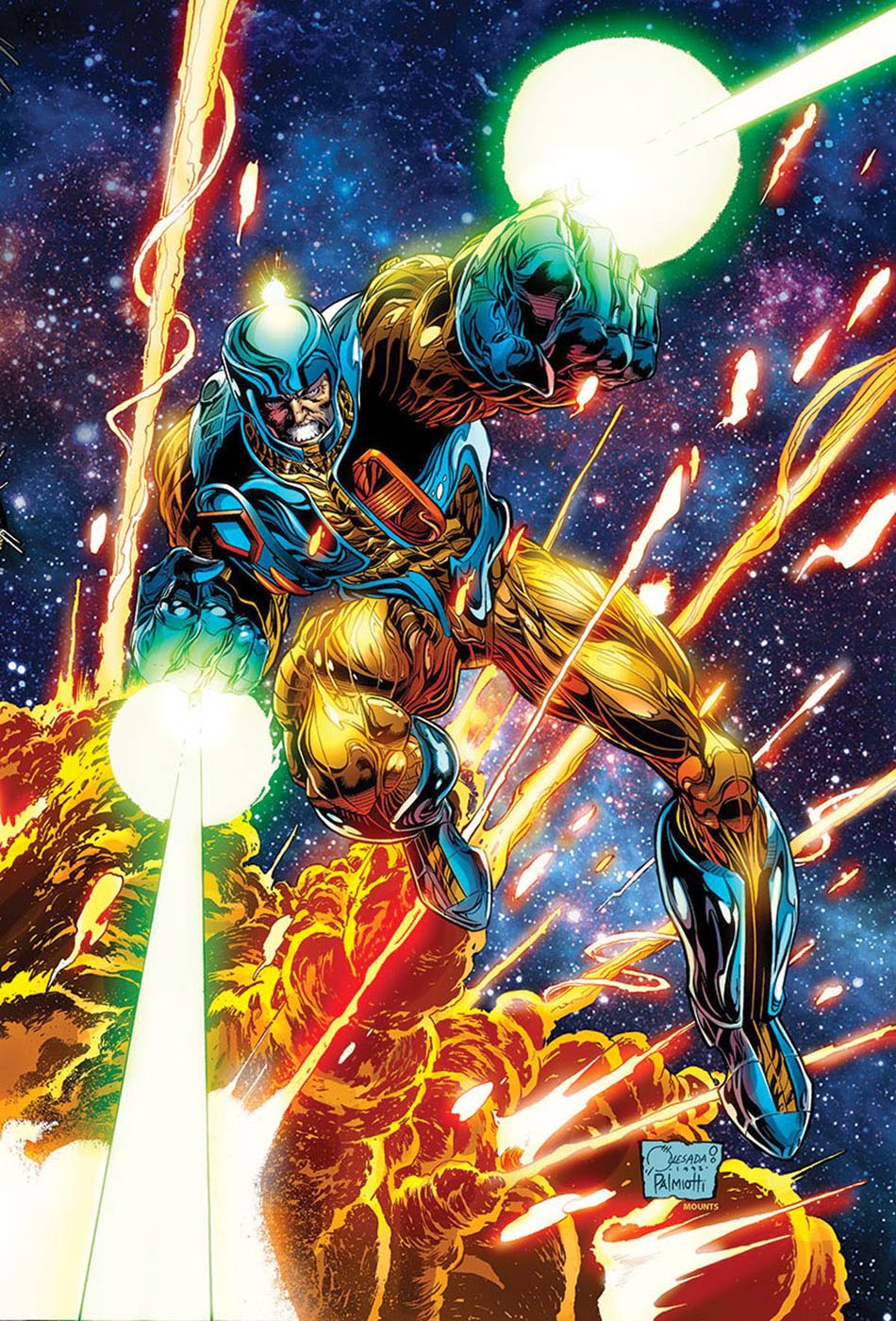 Okay, so sometimes it's 'Pick of the Month', others it's 'Cover Dan Most Wants To Blow The Hell Out Of' - sue me (actually don't unless you want to be disappointed - comic blogging isn't exactly a way to riches).

So yeah, this remastered cover would still hit you between the eyes, even if you took away it's breath-taking recoloured jobbie. The drawing alone on this remastered cover still shows what a pencilling powerhouse Joe Quesada was right from the early days - and talent never dates my friends. Unless you're Vanilla Ice.

Valiant says: Aric of Dacia, a fifth century Visigoth warrior abducted and enslaved by the brutal Spider Aliens, fights his way free of his captors and steals their ultimate weapon, the X-O Manowar armor. But 1,600 years have passed while the Spider Aliens held Aric captive and the time he returns to is not his own.

Trapped in the modern day, Aric is now the last of his people, a savage warrior out of time in a world of corporate treachery and casual deceit. But, armed with the power of the X-O Manowar armor, Aric will rule... and he will make the Spider Aliens pay. Get the complete epic of Valiant's flagship hero starting here with this massive oversized volume collecting X-O Manowar (1992) #0-30, Armorines #0, X-O Database #1, as well as material from Secrets of the Valiant Universe #1. 800 pages. 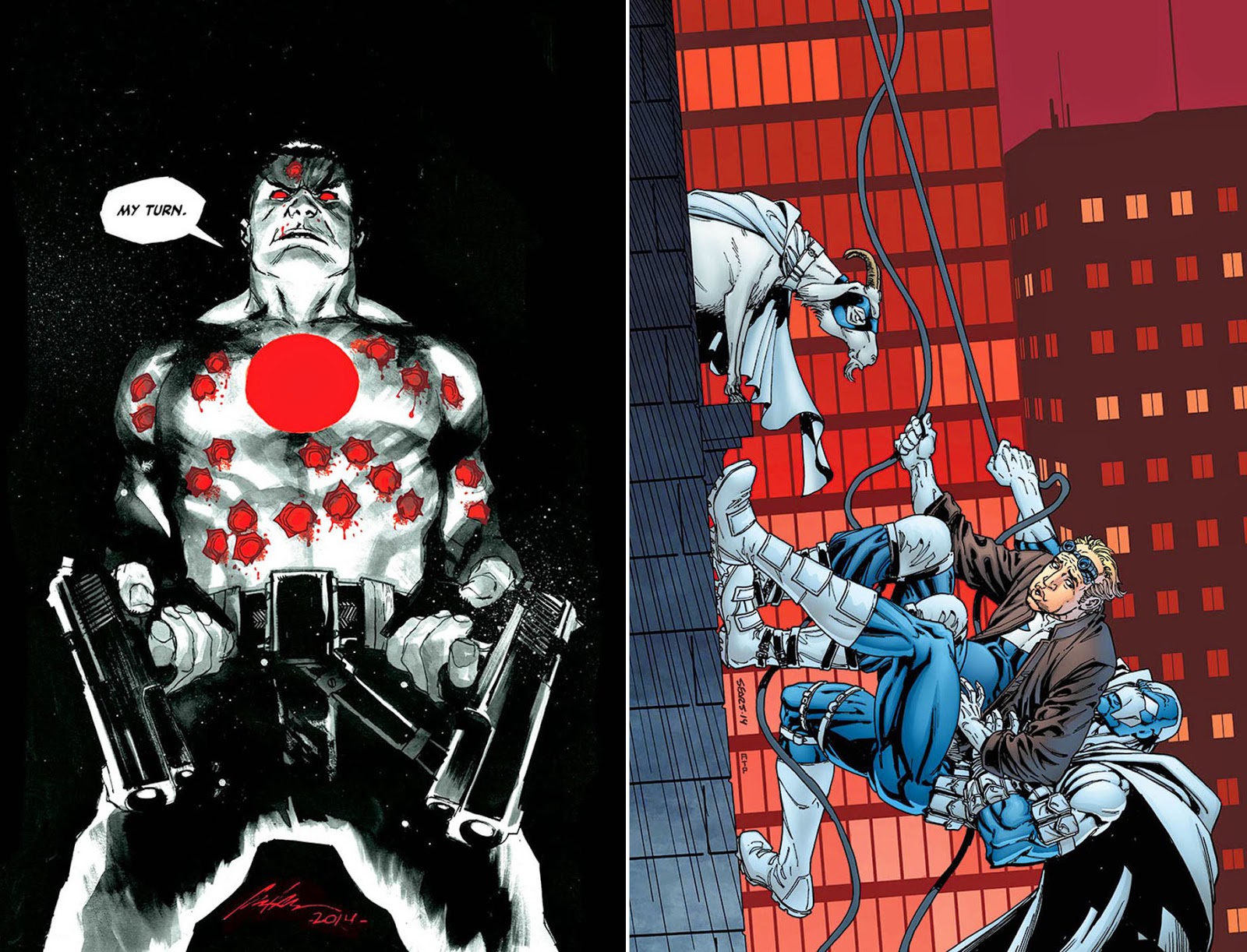 JUMP ON HERE:  BLOODSHOT #25 A murderer's row of all-star talents is going all-in for a 48-page milestone anniversary blowout chronicling the classified history of Valiant's most dangerous, most brutal, most relentless hero - Bloodshot!

Meet the man behind Bloodshot - or is he? When one soldier's untapped killer instinct takes over in a feature-sized lead tale! Plus...an all-new story by comics master Howard Chaykin! The original Bloodshot launch team join forces again for an all-new adventure! And go on Bloodshot's journey from the end of the line with H.A.R.D. Corps to the Colombian jungle where Unity found him! Along with many more bonus stories and artwork, a complete cover gallery, and more! 48 pages, $4.99

SOUNDS LIKE AWESOME  Q2: THE RETURN OF QUANTUM AND WOODY #2 Quantum and Woody are all over the news - but Eric Henderson and Woody Van Chelton are retired...and officially getting too old for this ish. There's a NEW Quantum and Woody in town...they're still not a couple...and the mystery behind their existence threatens to destroy what little is left of Eric and Woody's one-time partnership. As a sinister secret organization besieges our heroes, will Woody unlock the secret of the new Quantum and Woody in time to save them--and will Eric let him? $3.99 (W) Christopher Priest (A) M.D. Bright

UNITY #12 A new day has dawned for the elite assemblage of heroes called UNITY, and, in the wake of the Armor Hunters' invasion, the time has come to grow their ranks. Who will be the next fearless hero to join the roster of the world's most elite superteam? And just what is the international strike force called THE UNITED - and why have they marked UNITY's own X-O Manowar, Ninjak, Livewire, and Eternal Warrior for elimination? (W) Matt Kindt (A) Cafu. $3.99

X-O MANOWAR #30 Armor Hunters was only the beginning! Now, still reeling from his harrowing encounter with the Armor Hunters, Aric of Dacia might face a new threat; the calculating paramilitary force known as the Armorines! Armed with an array of astounding abilities far beyond the capabilities of the X-O Manowar armor, has this bleeding-edge commando unit come to save Aric's kingdom...or grind it into dust? (W) Robert Venditti (A) Diego Bernard $3.99

ETERNAL WARRIOR DAYS OF STEEL #1 The Eternal Warrior...Gilad Anni-Padda, the Earth's Fist and Steel...is forever charged with guarding the Geomancer and securing the Earth's safety. After completing another brutal mission, the Earth's undying guardian is approached with a cryptic task: find and save a baby -- in whose hands might rest the fate of an entire people. But the Eternal Warrior is no nursemaid...and, to complicate matters, a thousand Magyar invaders want the baby dead. At the edge of civilization, can history's most expert killer keep one precious life alive? $3.99 (W) Peter Milligan (A) Cary Nord

What do you think? For the full list of Valiant's November 2014 solicitations, click the jump.
Posted by IADW at 6:09 pm