I HAVE PART OF A PLAN: Chris Pratt Visits Children's Hospital as The Guardians of The Galaxy's Star Lord

While the other actors of Marvel Studios' break-away smash Guardians of the Galaxy are probably still thanking their agents a million times over for the mega career boost, Chris Pratt is making like his character film Star Lord, and crash-landing in unexpected places. Bursting into the Children's Hospital of Los Angeles, in character, he quickly sent rooms of sick kids into a social media and real life craze - even letting some wear the outlaw's now infamous jacket. 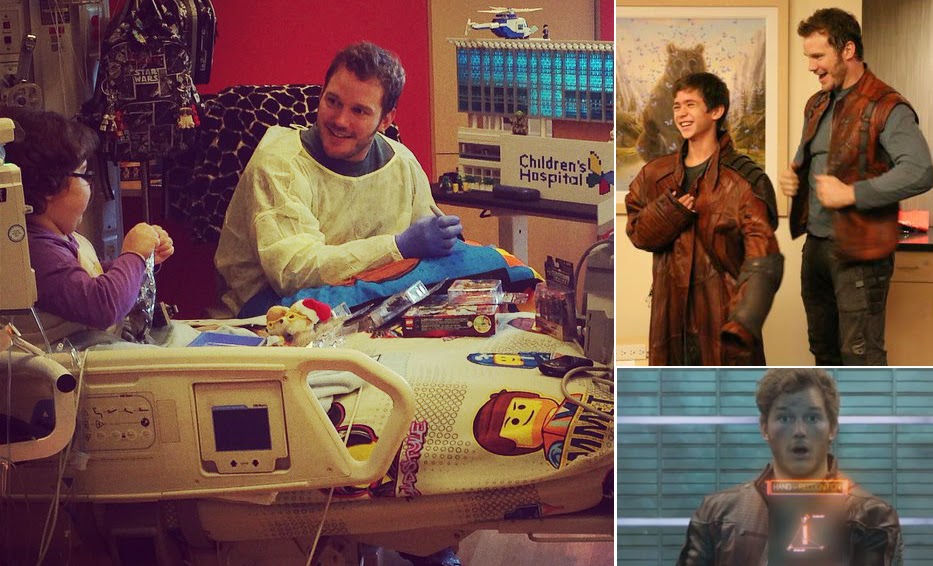 While it is great to see a celebrity actually doing SOMETHING MEANINGFUL with their celebritydom, other than trying to capture headlines with their love life, the boy pictured left is Dylan Prunty, he built a logo replica of his hospital while enduring treatment. Chris, at his bedside, isn't just a Guardian of the Galaxy - he is also the star (voice) of the year's other big hit - The Lego Movie. Imagine Dylan's buzz!

Still, it doesn't seem like the visit to the L.A. kids hospital was a random assault either. From Chris's interview with Panzer TV; "I stole the jacket and some of the wardrobe so that, if this movie comes out and does what everyone hopes it can, I can follow the example of someone -- say, like, [Seattle Seahawks quarterback] Russell Wilson, you know -- and go visit kids."

"If it was a big enough movie, to where it would mean something to a kid who's sick in the hospital for Peter Quill or Star-Lord to come visit them, I'll do that. I think that's awesome, man. That would give me real meaning for this movie, you know?"

After reading that, who doesn't want to spend time building Lego with Chris? Heck, I wouldn't even sabotage his build by hiding any key pieces or anything!