SWEET AS: The Top 4 From Dynamite Entertainment's November 2014 Solicitations

When we Kiwis find something we like, we say it's 'Sweet as'. When I look at Dynamite Entertainment's November 2014 solicits, these four make the 'Sweet As' grade: 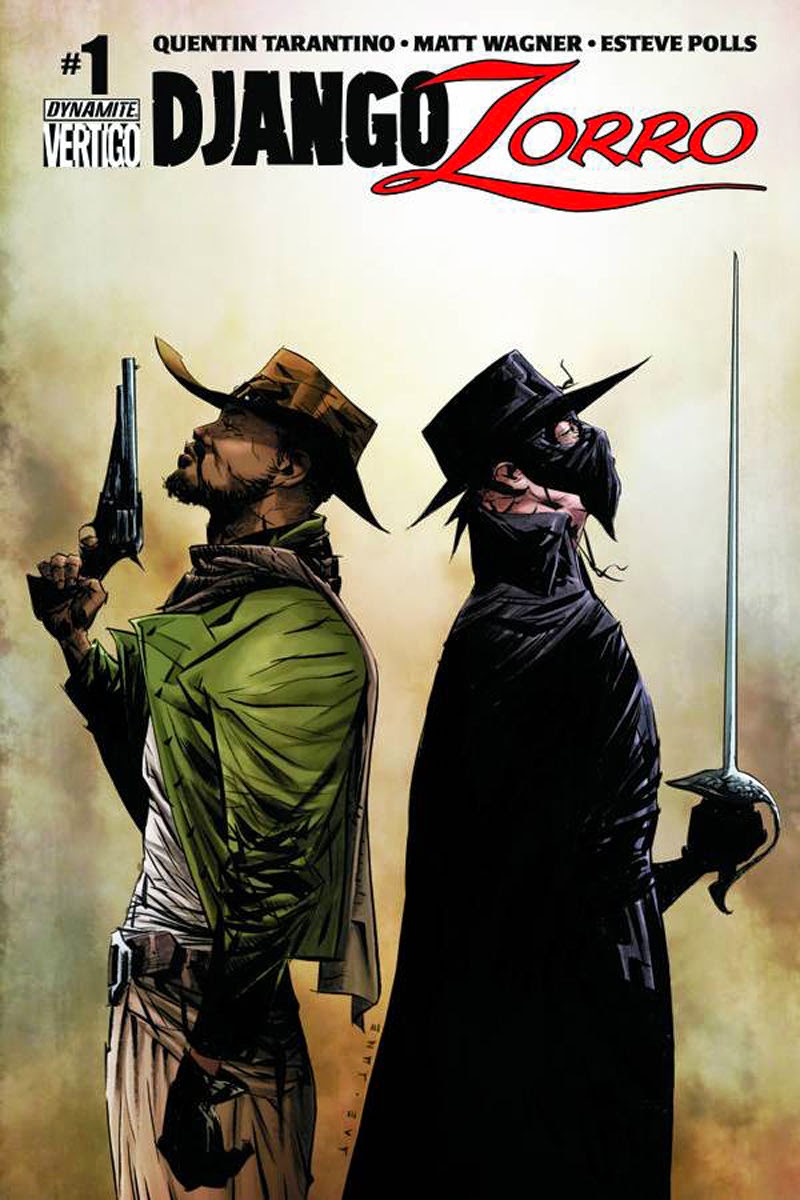 As if Zorro wasn't the coolest indie character out there, he now teams with Quentin Tarantino's vengeful former slave Django, to seal the deal!  Heck, it's even written by Tarantino himself! 'Just don't faint from its awesomeness while holding the comic. The fall might wrinkle the pages.

Dynamite says: The official sequel to Django Unchained in the first-ever comic book sequel ever done of a Tarantino film!

Set several years after the events of Django Unchained, Django/Zorro #1 finds Django again pursuing the evil that men do in his role as a bounty hunter. Since there's a warrant on his head back east, he's mainly been plying his trade in the western states. After safely settling his wife, Broomhilda, near Chicago, he's again taken to the road, sending her funds whenever he completes a job.

It's by sheer chance that he encounters the aged and sophisticated Diego de la Vega -- the famed Zorro -- and soon finds himself fascinated by this unusual character, the first wealthy white man he's ever met who seems totally unconcerned with the color of Django's skin... and who can hold his own in a fight.

He hires on as Diego's "bodyguard" for one adventure and is soon drawn into a fight to free the local indigenous people from a brutal servitude, discovering that slavery isn't exclusive to black folks. In the course of this adventure, he learns much from the older man (much like King Schultz) and, on several occasions, even dons the mask and the whip... of The Fox! (W) Quentin Tarantino, Matt Wagner, (A) Esteve Polls.

VAMPIRELLA FEARY TALES #2 Vampirella's only hope of escaping The Storyteller is to live out the twisted fantasies in his book. She soon finds herself cast as "Snow White" in a macabre re-imagining of the classic Betty Boop cartoon. Then, we provide a fresh take on an old fishwife's tale when Vampirella is sent to a thirsty Old West town to find out whether or not Sailor Jim and his mermaid bride really are living 'happily ever after'. (W) Nancy A. Collins, Gail Simone, Stephen R. Bisette, Denis St. John, (A) Jack Jadson, Ronilson Freire, Bilquis Evely

JOHN CARTER: WARLORD OF MARS #1 John Carter: Warlord of Mars returns in a new monthly series, officially authorized by Edgar Rice Burroughs, Inc.! Return to the exotic landscape of Barsoom, as John Carter has to save his adopted world, not to mention his beloved Dejah Thoris, from an enemy like no other he has ever faced. John Carter must truly become Warlord of Mars against an adversary who is every bit his equal on the savage red planet. An amazing new era starts here! (W) Ron Marz (A) Abhishek Malsuni

TUROK: DINOSAUR HUNTER #10 Life is difficult for Turok in the "civilized" Great Britain of the 1200s, where he's treated as a "savage" despite being able to tame dinosaurs better than anyone. But a murder conspiracy against one of his allies will send the dinosaur hunter deep within Sherwood Forest, and back into his element. (W) Greg Pak, Paul Tobin (A) Mirko Colak

What do you think? For the full list of Dynamite's November 2014 solicitations, click the jump.
Posted by IADW at 7:14 am