Whenever I hear a new secondhand bookstore is opening, I always like to be one of the first in line on opening day. That way I can scoop up all the number ones on offer, along with find any holes in my collection from their debut offerings, before anyone else beats me to it. Recently my birth town of Whakatane was home to just such an event, and here are four of the picks I grabbed.

THE SPECTRE #1 Writer John Ostrander wrote two titles in the 80's that never date. Suicide Squad and this, his run on The Spectre with artist Tom Mandrake. The mix of detective Jim Corrigan investigating the lives of the corrupt and criminal, with the dark and wildly imaginative punishments his alter-ego, God's Spirit of Vengeance inflicts upon his prey, makes for such a rich premise, each panel tears at your soul over the fact a Spectre ongoing has not been more of a constant fixture at DC.

Tom's art perfectly catches the atmosphere of the character and regardless of whether it's a skyscraper tall gangster shooting up the city, or Spectre injecting himself in order to make the drug dealers he's turned into his fingers burn, Mandrake manages to not only keep pace but tie it all together at the same time. ***** 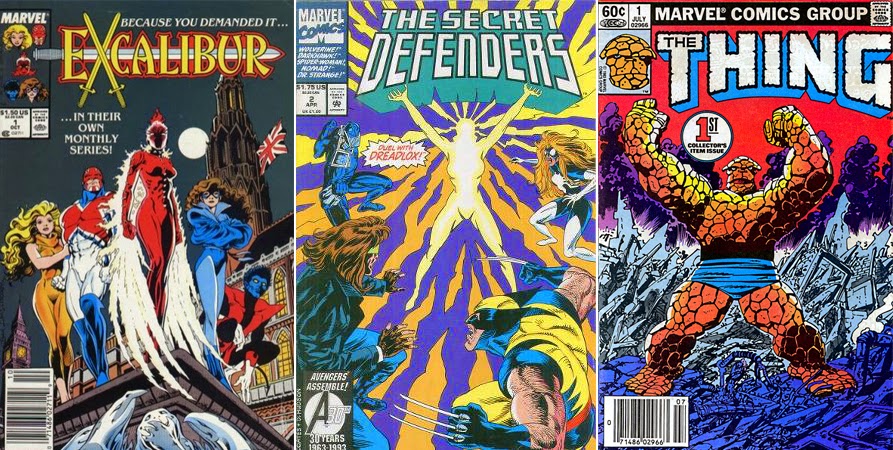 EXCALIBUR #1 Every time I finish an issue of Excalibur, by artist Alan Davis and writer Chris Claremont, I feel like declaring the work is better than any the fabled writer did on X-Men, and the first issue of their run is no exception. The humour, the quirky adventures and the interactions of the mix-matched team thrown into living together are all in fine form here, as Warwolves return to sniff out Phoenix - only to mistake Kitty for their prey.

While I always think of Annie Lennox for some reason when I see Phoenix's 80's costume, the humour in this book really does make it seem more English than American in terms of it's adventure, with everything from Nightcrawler's Bath to the multi-dimensional basement placing it nicely alongside Dr Who, and the rest of Brit-pop's best.*****

THE THING #1 Marvel must've loved the bejeebers out of John Byrne. Here they approve the dude to write an all-new Thing series (replacing Marvel-Two-In-One), only to get a pre-Thing Yancy Street Gang debut issue from the guy, without so much as a 'Clobberin' Time!' to be found. I mean what gives? No seriously, what gives? The flashback tale on how Ben joined and left gang life does get a bit 'cheesy 80's sitcom' in parts, but Grimm hooked me into Marvel when I first discovered comics, so I'd never call it bad. Had I bought it at the time though, I'd be hoping #2 was 22 pages of punching just to make up for lost time. *****


SECRET DEFENDERS #2 Speaking of heroes I'm addicted to, I confess, I can't pass-up a comic with Darkhawk in it. It is that simple, and unfortunately so is this issue. The threat from Dreadlox and co (yes, that's right 'Dreadlox') never seems big enough for Doctor Strange to have assembled a Defenders line-up to deal with in the first place. The dialogue is awkward, the art more so and despite having Spider-Woman II in there, you just finish the book going 'I could have done better than that #%$$&^$' and coughing up hairballs from the spoonfuls of 'bad' you have stuck in your throat. *****
Posted by IADW at 8:00 am