Whenever I hear a new secondhand bookstore is opening, I always like to be one of the first in line on opening day. That way I can scoop up all the number ones on offer, along with find any holes in my collection from their debut offerings, before anyone else beats me to it. Recently my birth town of Whakatane was home to just such an event, and here are the final four picks I grabbed. 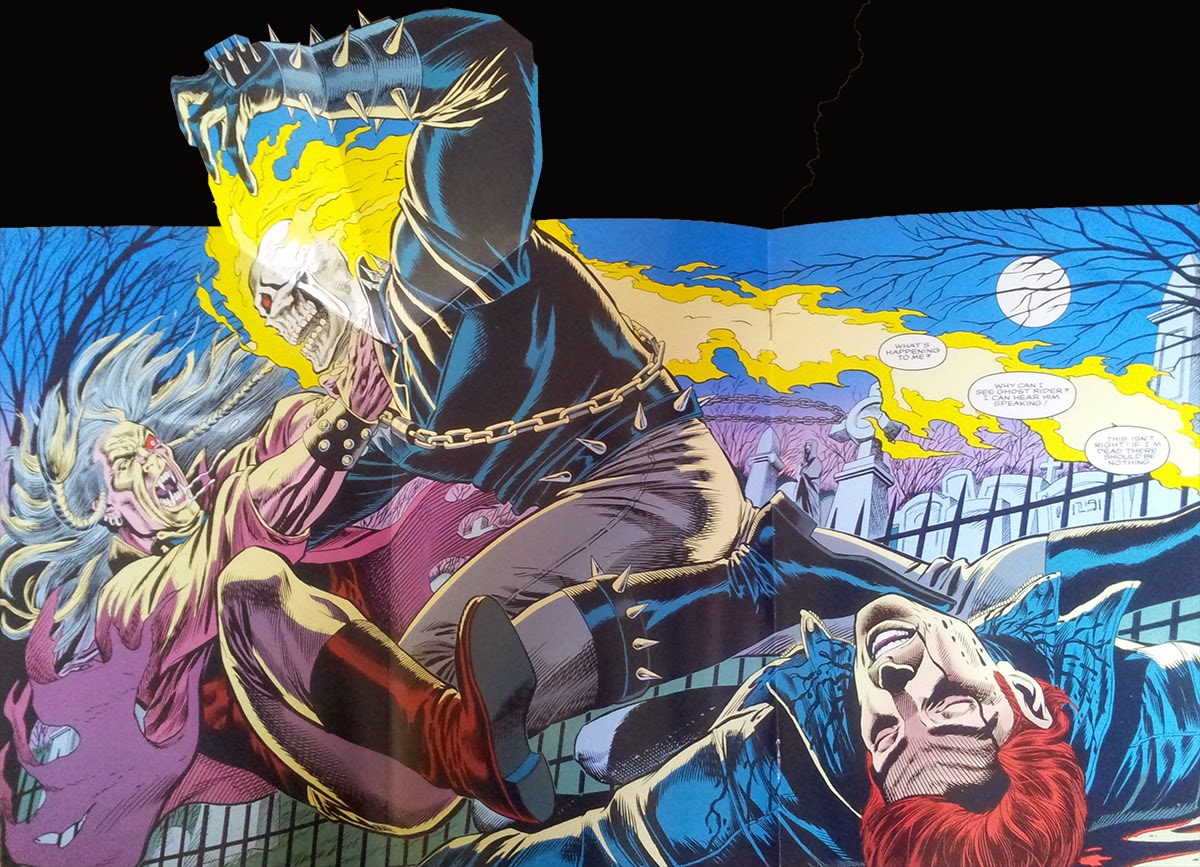 GHOST RIDER #25 Man, I really have to master that whole 'spoiler alert' thing. Be it Dan Ketch or Johnny Blaze, the Spirit of Vengeance always spins my wheels. In the 90's, his books (yes back then it was plural) were home to horror and great art, and this foil covered milestone issue with the cardstock fold-out pop-up centrespread shown above is no exception (ahh the 90's)!

Blackout's savage killing spree includes a victim no one saw coming: Dan Ketch. As the Rider springs from his corpse to avenge a new kind of spilt blood; his host's, G.R. must survive his own grave as well as the evils gathering around him, forever unable to 'revert' back to his human form. Not only does this issue deliver on 'milestone', it sets up the much-missed Midnight Sons line of comics, with posters for Spirits of Vengeance, Morbius, Darkhold and Nightstalkers (feat Blade) included, plus a scorching pin-up of the main man drawn by Mark Texeira himself! ***** 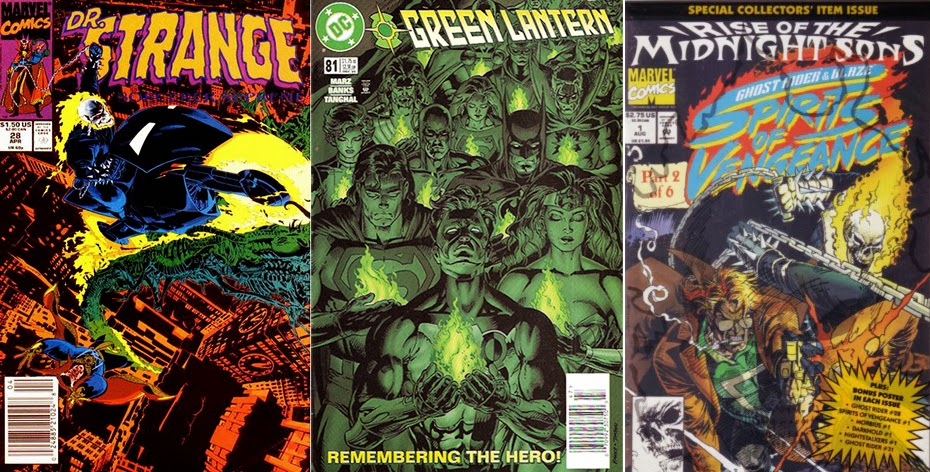 DOCTOR STRANGE #28
Trade secret: I've always wanted this cover. Hey, it's Ghost Rider and Dr Strange soaring up a giant plant in the middle of the city, what's not to love? Trade truth: I read the first internal splash page, and my interest stopped there.

Chris Marrinan would do great stuff on Nova in future years, but with two of Marvel's top cult creations in his hands, he fails to do the same here. Maybe the guy who drew the 3 Musketeers ad in the comic would like his gig. Shame, I bet Roy and Dann Thomas wrote some awesome words too. *****

GREEN LANTERN #81
Missing the 'Ron Marz written and Darryl Banks drawn 'Kyle Rayner' years' led me to pick this one up, as it really was a great era for the franchise and an awesome birth for a hero. Here, Hal Jordan's funeral post Final-Night, sees even Swamp Thing and Constantine show up for a ceremony held in a power-ring created cathedral in the ruins of Hal's decimated hometown.

On the premise it's awesome, but all the eulogy's are too clipped to deliver anything real, and Batman is WAY out of character. His change of heart on the last page is so sickly sweet diabetics should avoid this issue at all costs. Actually, there's probably a lesson for us all there. *****

GHOST RIDER AND BLAZE: SPIRITS OF VENGEANCE #1
Don't you love it when a secondhand bookstore has a comic for sale with the original polybag it came in unbroken? Or am I the first to find one?! Drawn by the always hard to beat Adam Kubert, this issue witnesses the rise of Lilth, the demon mother, who quickly calls upon her surface dealing children, to begin the first phases of her plan.

As Ghost Rider tries to convince Johnny Blaze of his visions, and why he needs to stay riding against the dark, Lilth's own plans seek to do the convincing for him. However just as the odds mount, one child revolts, and soon the dead are piling on both sides of the divide. More free posters, Doctor Strange and a great read by writer Howard Mackie, means this issue makes you wish it was 'that era' all over again - just like all good back issues should. *****
Posted by IADW at 8:00 am