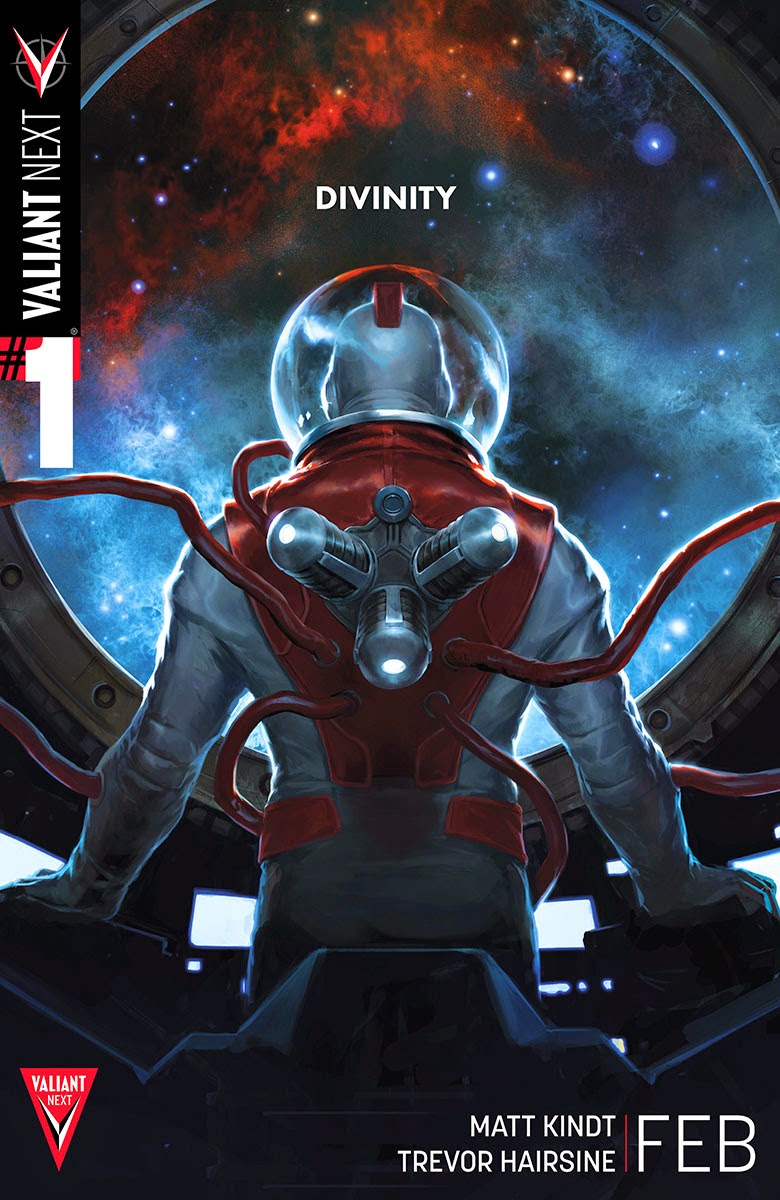 I think my wallet just shat itself. While I'm not sure what kind of coinage that equates too,  the news that Valiant Entertainment are launching six new titles amongst their current all-class line, means my budget is going to be faced with a simple ultimatum. Expand or bust.

Realising that 'food' is highly overrated, here are four of the series named as part of 'Valiant Next' that will soon be replacing the grocery list for this comic-fan-Dan.

At the height of the Cold War, the Soviet Union -- determined to win the Space Race at any cost -- green lit a dangerously advanced mission. They sent a man farther into the cosmos than anyone has gone before or since. Lost in the stars, he encountered something unknown. Something that...changed him.
Long thought lost and erased from the history books, he has suddenly returned, crash-landing in the Australian Outback. The few that have been able to reach him believe him to be a deity --- one who turned the scorched desert into a lush oasis. They say he can bend matter, space, and even time to his will. Earth is about to meet a new god. And he's a communist.
How long can it be before the first confrontation between mankind and DIVINITY begins? (More)

Goodbye milk and cookies - IVAR, TIMEWALKER • Ongoing • #1 in January • W: Fred Van Lente • A: Clayton Henry
At this very moment in Geneva, Switzerland, history is being made. A thousand meters underground inside the Large Hadron Collider, researcher Neela Sethi is about to discover time travel -- and jeopardize her life in the process. But she doesn't know that yet. Ten minutes from now, every deadbeat chrononaut, wannabe conqueror, and misguided protector of the timestream will be banging down her door. Good thing that the legendary Ivar, Timewalker, got there first...right? Now it's down to history's most jaded, most tempestuous time traveler to stop the worst of everything that is, was, and will be...before time runs out! (More) 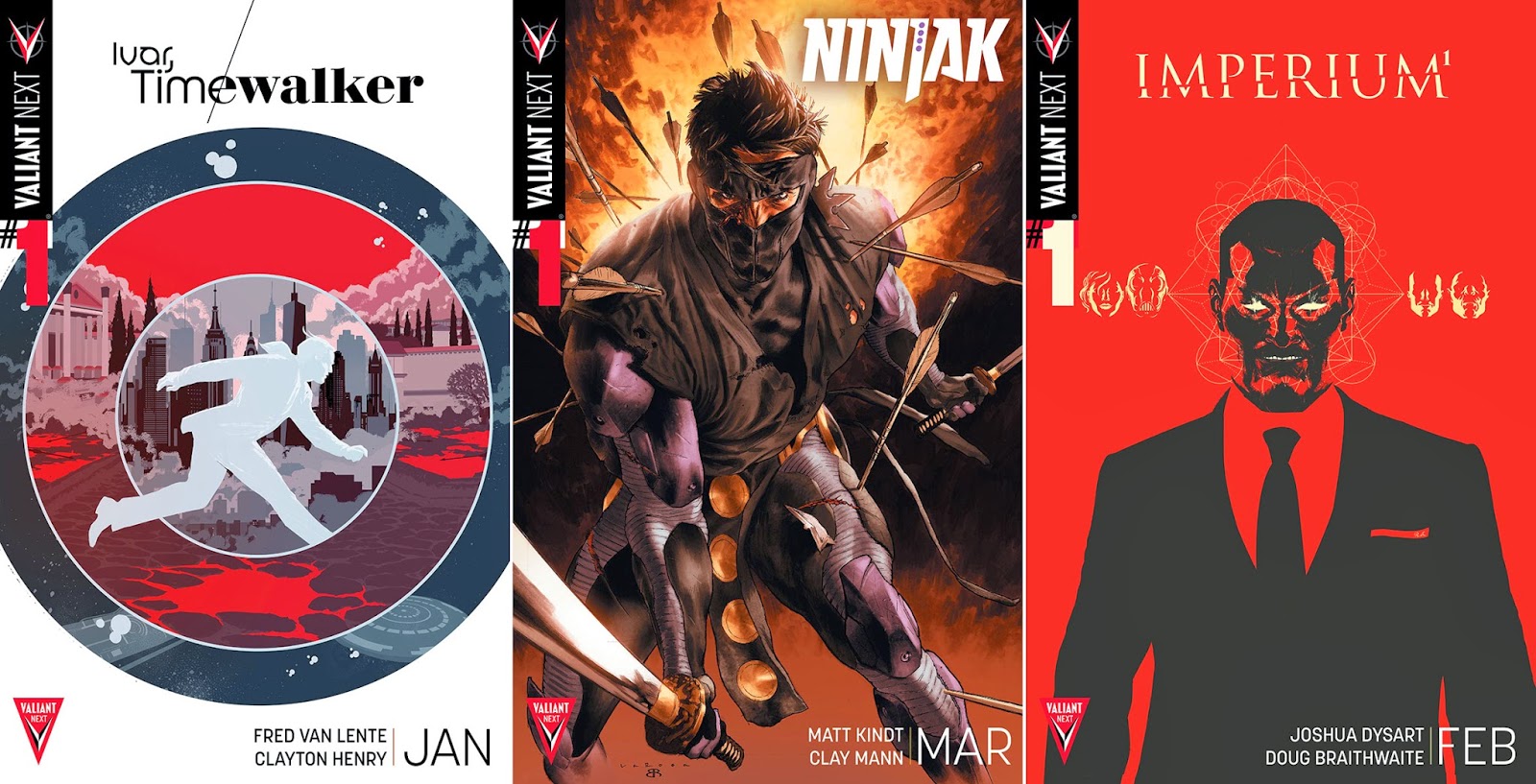 Take care bread and butter - NINJAK • Ongoing • #1 in March • W: Matt Kindt • A: Clay Mann
Then: Meet inexperienced MI-6 recruit Colin King on his first mission in the field as he learns the basics of spycraft and counterintelligence, and develops a volatile relationship with his first handler.
Now: Colin King is Ninjak, the world's foremost intelligence operative, weapons expert, and master assassin. And he's hunting the Shadow Seven -- a secret cabal of shinobi masters with mysterious ties to his training and tragic past. (More)


P!ss off peas and carrots - IMPERIUM • Ongoing • #1 in February • W: Joshua Dysart • A: Doug Braithwaite
Toyo Harada is the most dangerous human being on the planet. Imbued with incredible powers of the mind, he has spent his life guiding humanity from the shadows. But today he is a wanted man. His powers are public knowledge, his allies have turned to enemies, and he is hunted by every government on the planet.
Instead of surrendering, Harada has one last unthinkable gambit to play: to achieve more, faster, and with less, he will build a coalition of the powerful, the unscrupulous and the insane. No longer content to demand a better future, he will recruit a violent legion from the darkest corners of the Earth to fight for it. The battle for utopia begins now. (More)

MY THOUGHTS  While Ninjak is the decades most overdue series, and the 'must buy' of the group, seeing Dysart's amazing work on Harbinger expand with Imperium is wicked and the fact the series aims to up the 'evil' quota of the Valiant U makes it even more so.
Timewalker seems a decent match for Van Lente (hey, when isn't time-travel fun?), and Divinity looks to fill the black hole left by the absence of Solar in this 'Valiant Universe', that of a super-powered deity, but in a twisted, far more richer way.

WAIT THAT'S ONLY FOUR, WHERE'S THE OTHER TWO?  The last two pieces of the puzzle are for another post. One is a project that I have been quietly having my fingers crossed for for a fair few months now, and seeing it named is something I need a decent amont of space to gush over. That and the preview art is astounding!