In playing 'Star Trek' as a kid, I never wanted the yellow shirt - 'cool' was always defined by blue. Today, sadly, the man behind that colour, whose hand gesture has become a global sign for peace in both pulp culture and beyond, Leonard Nimoy has achieved peace of his own - passing away at the age of 83. The unique tone of his voice and its phrasing, the other roles he took as both actor and director, as well as a lifetime as a living pop culture icon and ambassador long after the original Star Trek series had ended, Nimoy's legacy is as unmeasurable as the loss to the world his passing has created. 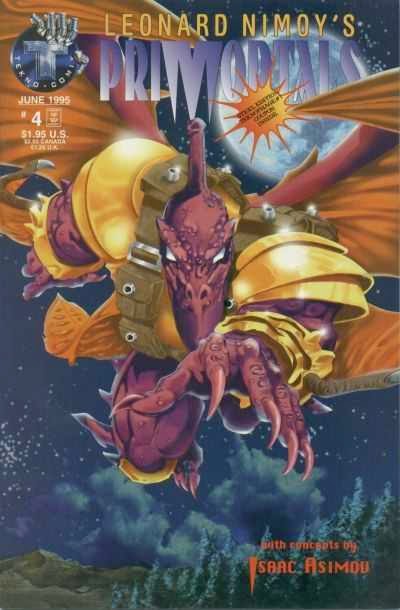 Comic wise, my core memory of Nimoy was in teaming with Neil Gaiman and Gene Roddenberry to launch the sadly short lived line of sci-fi titles from Tekno Comics. While his Primortals lost out on my pull-list in favour of Gaiman's Mr. Hero the Newmatic Man, I had the poster for Primortals #4 on my wall for years.

It always excited me in looking at it, that Leonard didn't abandon us fans after the cameras stopped, like many seem to do. Rather he embraced himself as one of us and consistently added to the universes we savour.

By cherishing his body of work and his spirit as 'one of ours' we won't abandon him either.

To close, it's best to share the last Tweet he sent out, just days before his last: "Life is like a garden. Perfect moments can be had, but not preserved, except in memory. LLAP"