WHAT YOU SINGIN' FOR B!TCH, THIS AIN'T GLEE: Shang-Chi Based Secret Wars Series Gives New Reason To Kung Fu 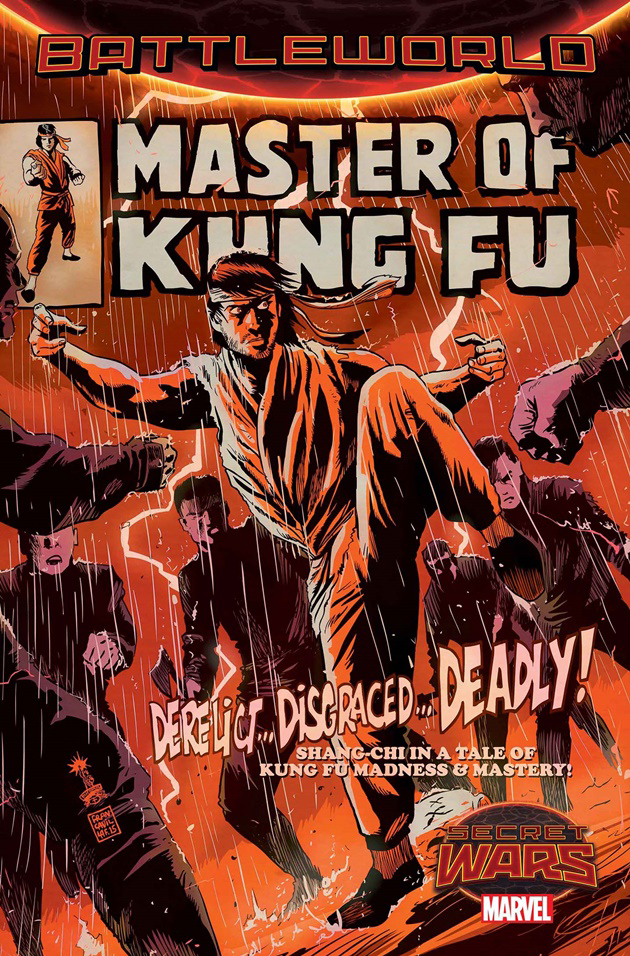 Once upon a time Marvel put out a sweet range of one shots under the banner 5 Ronin. In each of the five issues, Marvel reimagined a character like Wolverine, Punisher and Psylocke in Samurai era Japan. When you picked each book up, it literally dripped coolness.

Now swap 'samurai' for 'kung fu', and it sounds like the same leak might well prove a factor to Marvel's newly announced Secret Wars tie-in series: Master of Kung Fu - set in the mystical Marvel land of K'un Lun.

Two things you should be able to tell from the awesome Francesco Francavilla cover to the left is 1) Shang-Chi, Master of Kung Fu is back in the drivers seat (hence the name), and 2) god damn it's about time we had corner boxes back again.

Written by Haden Blackman and drawn by Dalibor Talajic, this series sees Chi pit his kung-fu grip against a variety of Marvel stars reimagined. From the obvious choices like Red Sai (Elektra?) and Rand-Kai (Iron Fist), to more outside picks like Marrow, Typhus (Typhoid Mary?), plus 'Kitten' and Lockheed, each name generates even more buzz for this brilliant idea.

Heck, even Rahne/Wolfsbane is there! Here's what Marvel says:


Welcome to K’un Lun, a land where the study of martial arts reigns supreme. In a world where everyone is a master of their craft, what becomes of the drunken, drop-out failure? Shang-Chi was the most prized student at the most prestigious of K’un Lun’s many martial arts schools. Now he’s a washed up has-been living on the streets.


Cast out and forsaken by society, Shang-Chi will join other outcasts like him in a bid to dethrone the harsh and evil Emperor Zu. One problem – Zu is Shang-Chi’s father! Things are going to get messy.