NEED FOR SPEED: Comics' Other Top 10 Fast and The Furious Heroes

Fast and The Furious is a Hollywood phoenix. On the verge of going straight to DVD after it's third instalment, it has been reborn into one of the top 20 film franchises of all time - bigger than Toy Story.

In comics, we have plenty of fast and furious folks. Wolverine, Ghost Rider, She-Hulk, Storm, Hulk, The Flash(es), Wonder Woman, Bloodshot, Spawn and Judge Dredd... in fact, we're way over the limit and accelerating every month! So let's put the usual top 10 aside and slip into gear with the Top 10 OTHER 'Fast and The Furious' heroes in comics:

10) SLAINE Conan who? This berserker is a rival for 2000AD's best bad ass. A tough as guts barbarian who dubs his axe the 'brainbiter', Slaine's 'warp spasm' transforms him into an even more monstrous opponent, with less thought and a lot more action!

9) WAR MACHINE No pimped out Mustang has this kind of firepower. Sure if you're on your learners license you can opt for the 'Iron Man' version, but ladies, nothing beats the metallic black and white or the longer lasting burn of War Machine. Plus the guys name is 'Rhodes'! 'Nuff said!

8) ROCKET RACCOON If a scene in Guardians of the Galaxy rivalled 'dancing Groot', it was Rocket on Groot's shoulders in the prison colony, wrapped in a feral rage - screaming his nuts off and firing his bazookas full-tit as the camera screamed around him. Trigger happy mammals with a temper = Fast and The Furious.

7) VIXEN Sleek, swift and with curves deadlier than any race track, DC's Vixen can call upon the strength, speed and abilities of any creature from nature's kingdom. The ferocity of a bird of prey, to the land-record speeds of a cheetah, this Suicide Squad staple is a lock for this list!

Who are the Top 6?  Click through to the next page and find out!

6) THE SPECTRE You don't get more 'furious' than God's Spirit of Vengeance on earth. Whether he's turning drug dealers into burning syringes or appearing hundreds of stories tall in order to fight the forces of the supernatural, Jim Corrigan's alter-ego is without rival.

5) BIG BARDA Every FF movie has a long haired brunette that looks as hot as the car she drives, and this is mine. Sure Orion is the New God with a fast vehicle and temper kept in check by a 'Motherbox', but Barda is speedy in battle and as a former Female Fury to Darkseid, she has had to fight her way out of his slave pits more than once.

4) X-O MANOWAR A barbarian from the roman ages, inside an alien suit of armour capable of demolishing cities and flying at mach 3. Aric is almost more 'Fast and The Furious' than vin Diesel himself!

3) ARCHANGEL Most of the Horsemen of Apocalypse manage to go back to a life of smiles after a few issues. Not so Warren Worthington - Apocalypse's most famous 'Death'. His ongoing battle with his Archangel persona sees the skies (and those against him) ripped open on a constant basis!

2) BLACK PANTHER The king and sacred protector of the people and resources of Wakanda, being fast and furious is all the Black Panther has ever had to his name, yet that hasn't stopped him taking on some of the most powerful villains in the Marvel U, or his place amongst the Avengers. Get ready Hollywood, he's coming your way! 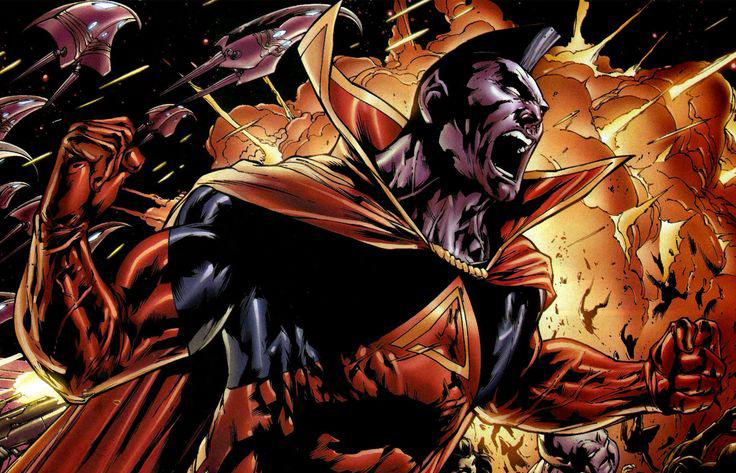 More than an alien Superman with a mohawk, Gladiator leads the Shi'Ar's elite warriors into any threat that challenges their cosmic empire - even though he could often take them single-handed. Super strength, speed, heat vision and a bad ass attitude, mean when this guys temper flares, even Galactus pees a little.

What do you think?  Namor? Nightcrawler? Nightwing? Forever? Starfire? Rouge? Who do you think comics' OTHER Top 10 'Fast and The Furious' heroes are?
Posted by IADW at 9:49 am