ATTACK TRAK! Dark Horse To Reprint All Masters of The Universe Mini-Comics, Including The Pre-Filmation Era 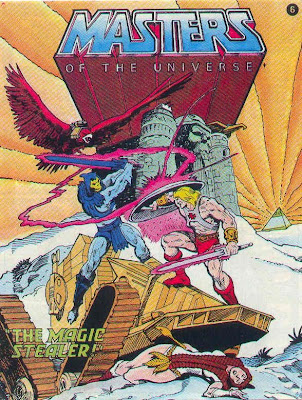 Okay, so the new Thor has been revealed as Jane Foster, now can we all go back to sleeping at night? Well sleeping at night, unless it's actually Panthor that gets you excited. In that case you'll turn to counting sleeps until Dark Horse Comics unleashes the He-Man and the Masters of the Universe Minicomic Collection hardcover this October, reprinting ALL the mini-comics ever packaged into a range of M.O.T.U. action figures.

As a fan, I still have with me the mini-comics from the figures prior to the time when the Filmation franchise cartoon turned following mini-issues into a similar (*cough* weaker) family friendly style.

These pre-Filmation beauties still define MY Masters of the Universe, with their darker adult fantasy based plots and detailed artwork (including some by a pre-Ghost Rider Mark Texiera!). Back in their day they stood out like the Marvel comics of old for not speaking down to their young audience (i.e. me).

In fact, from 'womaniser' Prince Adam and Tri-Klops as a bounty hunter demon army leader, to Zoar and the fact that Teela with her snake vest on is a nature-based Goddess, while Teela sans-reptile based body armour is a hot blonde amazon warrior of Eternia, these elements are still key aspects of how I see the battle for Grayskull in the rearview mirror. Heck, there was even a dimension of Skeletors!

Seeing these early un-kidified issues enlarged in the 6 x 9", 1,232 page collection alone will be worth it (but incase you're hoping, it will also include right up to the current M.O.T.U. line mini-comics - yes, including She-Ra's).