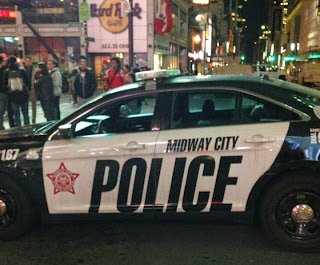 Few things excite me about DC more than Hawkman. As a kid, the idea of a guy who works with dinosaurs by day and is a sci-fi alien policeman by night blew my mind. Combining my two favourite loves in one character, it now may not be long before Hollywood audiences are treated to the same.

Based on pics that have surfaced at IGN over the set of the upcoming Suicide Squad movie, it seems that at least part of the films action will be shot in 'Midway City' - the DC Comics home of the Winged Wonder for much of his history, as well as his partner in crime, Hawkwoman.

What do you think?  See the rest of the uncovered images here.
Posted by IADW at 10:08 am