LET'S GET FRANK: Punisher Steals The Show In Secret Wars #1 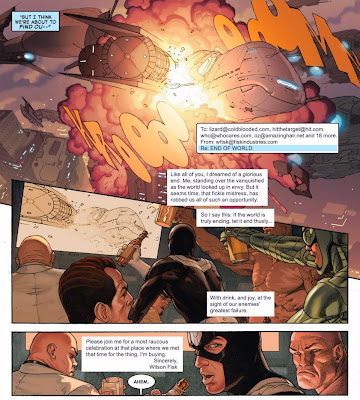 Hopefully this counts more as an incredible promo for Marvel's Secret Wars #1 than as a spoiler, but it is one of the best moments I've read in a while, and it would be pretty criminal not to share.

Sure it is a page that acts as an intermission to the main plot of sorts, but what a freakin' intermission it is! Not only do we get the hilarious email addresses of the likes of Lizard and Bullseye, we see Frank Castle himself gatecrash an end of the world party held by Wilson Fisk, The Kingpin, to celebrate the failure of the world's greatest heroes.

As beers are raised to scenes of Spider-Man and co battling the forces of the Ultimate Universe, a simple cleared throat catches their attention. Many probably knowing who, before they turn around.

The final issue of Punisher's own comic will apparently follow a similar theme, so fans wondering what bullets will do against Absorbing Man or Sandman will no doubt find out the wicked answers there.