SIGNS OF FRUSTRATION
FRANKENSTEIN UNDERGROUND #1:
One of the pitfalls in writing a take on one of the most loved literary monsters of all time, is you either pick one version and run with it, or take creator Mary Shelley's version and Frankenstein it with the best of the other adaptations that have hit since and hope for the best.

While Mike Mignola's trademark poetic, fun and dark writing style seems to take the latter road in this tale of Doc Frankenstein's infamous creation, blending the brooding with the barbarian, he ultimately unravels to read a bit more 'introverted oprah' than the 'brooding hamlet heavyhitter' I imagine him to be.

Sure, disappointing pasty ginga Frankenstein fans in 'that other part of the globe' may not be a major, but this was a creator/character pairing I was killing to see have a #1, and for the reality to be so soft, and hook free - almost written for trade - is pretty frustrating. *****

COMIC OF THE MONTH:  BLOODSHOT REBORN #1
Despite X-O Manowar launching prior, it was Bloodshot that I first picked up from the relaunched Valiant Universe. That said, I also dropped it three times. With the exception of notable storylines like Harbinger Wars, something just wasn't clicking. With only one issue in hand, Bloodshot: Reborn is such a 'click' for readers new and old, I'm wishing I was twenty years younger so I could start this write up with 'O.M.G.'. 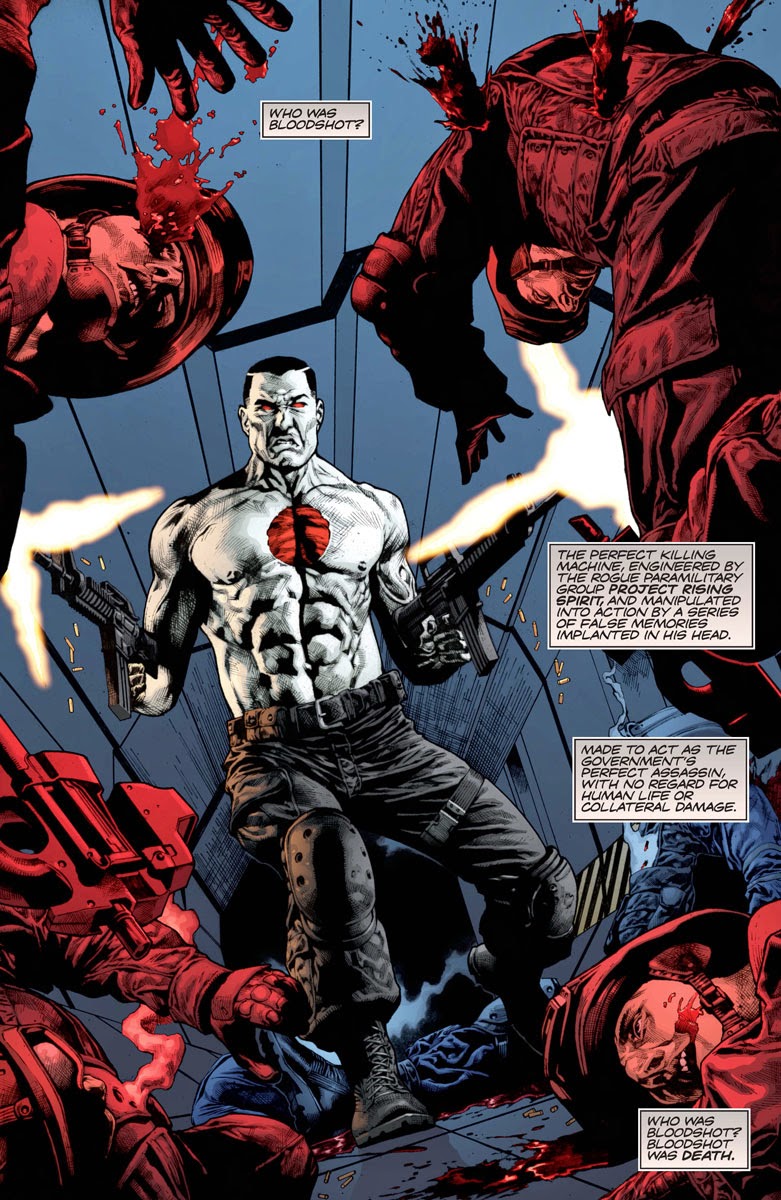 Trying to hide in a run down motel, the man now known as Ray Garrison has quite a big 'vacancy' sign sitting over his head. Gone are the nanites that took refuge in every inch of his body, making his skin white, his eyes red and any wound suffered repairable.

Gone is his sense of identity, and while he welcomes being able to feel tiredness and sleep, both rarely take effect. Instead he finds himself kept awake by the horrors he has committed in his past, both at the hands of Project Rising Spirit and as Bloodshot in revenge once he got his "freedom".

Artist Mico Suayan's AMAZING pencils cracked open eyeballs when the preview was released earlier this year, and it is good to see he never relents over the entire issue. Even as Jeff Lemire's thought-provoking script sees Ray start to hallucinate from the vices he uses to escape his nightmares, you relish every detail - but then you realise Bloodsquirt and a familiar face from the past know more than mere hallucinations should.

As a gunman in Colorado's killing rampage helps Ray find his feet, this is no Punisher clone you are reading, no militaristic wolverine. Bloodshot is firmly a man made monster turned man all his own, and you'll want to to learn why here, because trust me, 'reborn' is an understatement. *****

HONOURABLE MENTION  CONVERGENCE TIE-INS:
I've already blown my DC Convergence budget - so I'm starting to fear for the safety of my beer money. Greg Rucka's The Question has me wishing for a Two-Face ongoing. Seeing Shayera fly alongside Hawkman reminds me why 'Hawkgirl' will always be a pale imitation. And seeing Kelley Jones draw Swamp Thing is just as incredible as I'd hoped. Even Dan Jurgens on Superman feels more 'Jurgens' than his Nu52 Superman work. So big ups to DC on an event where no 'filler' is merely that. It's good to be home again.
Posted by IADW at 6:56 pm