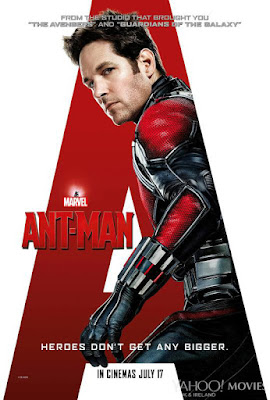 "One question... Is it too late to change the name?"

Lately, I've been too busy eating humble pie to make this review. I've been pretty vocal over the fact I wished original Ant-Man and in-comic founding Avenger, Hank Pym had been the hero that got his own blockbuster.

However, now having seen the end result, a film where oddly the most unbelievable thing over a man that shrinks to the size of and communicates with ants is the fact Paul Rudd (Scott Lang / Ant Man) has abs,  I can honestly say, I can't picture it being any other way.

Even if one of his weapons is Thomas The Tank Engine.

This is partly in that like Guardians of the Galaxy, Ant-Man breaks from the overly serious to put just the fun back into comic movies (if not movies in general), and partly in that the flick reminds me of my top in-comic moment for Scott, where Captain America offers him the chance to step up and be a hero, or continue running away from and back into his criminal past ad nauseum.

Sure it is an aged Hank Pym (Michael Douglas) that makes the offer here, but Scott's step up and the desire to become the hero his daughter already believes him to be are the key themes and motivations at play in this film.

What that gets us, is Marvel Studios' first 'Peter Parker' of sorts, and perhaps a more modern one at that. A true everyday man at heart, who saw wrong being done, righted it by committing 'a felony' and served time, while the villain he sort to highlight escaped justice. Not one for criminal activity at heart, he emerges optimistic from prison ready, to make a fresh start, only to find even the fast paced world of retail ice cream unwilling to give him a taste of that opportunity.

Enter Hank Pym. He created a Pym Particle during the war which allowed he and his wife to commit clandestine missions for the allied forces. In his wife's absence, political forces looked to weaponise his creation, not being a weapons manufacturer like Tony Stark, Pym went into hiding.

Now Pym's former protege, Darren Cross (Corey Stoll) is on the cusp of cracking Hank's long restricted secrets, and creating miniature 'YellowJacket' armours to sell to the highest bidder. With Pym's daughter, Hope van Dyne (Evangeline Lilly) seemingly at Darren's side, Hank offers the one good heart capable of pulling the ultimate heist, Scott Lang, the Ant-Man gig, in order to keep the Yellowjacket out of hands worse than those that created it.

Did Marvel just beat DC to creating a legacy character on film? Seems so. 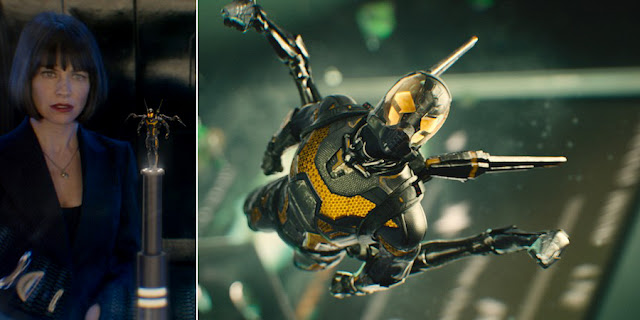 Sure the name may imply a height deficiency, but everything about this film is MASSIVE. The SFX? HUGE. The first of the two post credit sequences? COLOSSAL. The core cast's casting? GIGANTIC. The only small issue is what happens to a certain lamb, but we won't go there.

Evangeline proves the McKellen to this X-Men or the Jackman to this Wolverine. Luckily her looks bare a striking resemblance to a certain heroine, so this film's end almost ensures her fierceness of character (and fight scenes - woof!) will be back, if Marvel has any humanity or taste.

Sure, we'll never know what Edgar Wright's originally approved version would have been - but the film that has taken it's place has truly made a majestic mountain out of that molehill and it's one that all movie-goers will find a place for - heck, the movie even found a place for The Clash, so it's only fair right?

Yes, a 'grounded' hero is a 'soft' end Marvel's Phase 2 plans on, but as we head into Phase 3, this breather of sorts will ensure Ant-Man won't be squashed anytime soon.
Posted by IADW at 5:58 pm