SWEET AS: The Top 6 From Image Comics' October 2015 Solicitations 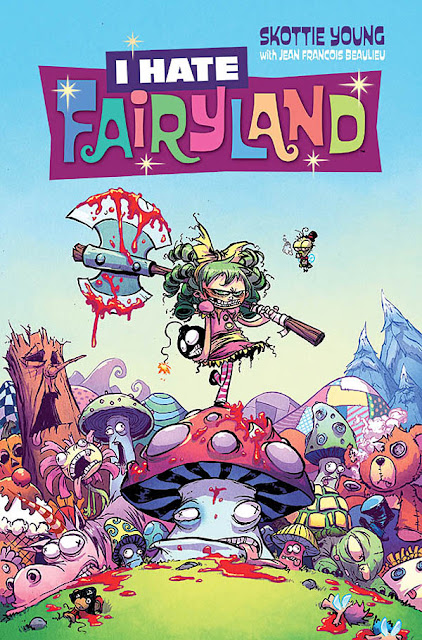 When we Kiwis find something we like, we say it's 'Sweet as'. When I look at Image Comics' October 2015 solicits, these six make the 'Sweet As' grade:

PICK OF THE MONTH:  I HATE FAIRYLAND #1

The Adventure Time/Alice in Wonderland-style epic that smashes its cute little face against Tank Girl/Deadpool-esque violent madness has arrived.

In an adventure that ain't for the little kiddies, (unless you have super cool parents, then whatever), you'll meet Gert - a six year old girl who has been stuck in the magical world of Fairyland for thirty years and will hack and slash her way through anything to find her way back home.

Join Gert and her giant battle-axe on a delightfully blood soaked journey to see who will survive the girl who hates Fairyland! (W and A) Skottie Young.

WE STAND ON GUARD #4 There goes the hideout. (W) Brian K. Vaughan (A) Steve Skroce.

THE WALKING DEAD #147 Out in the open. (W) Robert Kirkman (A) Charlie Adlard

TOKYO GHOST #2 Constables Led Dent and Debbie Decay are given their final mission: purge their bodies of all technology and invade the Garden Nation of Tokyo. (W) Rick Remender (A) Sean Murphy and Matt Hollingsworth.

SO LONG, AND THANKS FOR THE FISH  WITCHBLADE #185 Series finale! An era comes to a close with the double-sized final issue of Sara Pezzini's twenty-year run. Several previous Witchblade artists return to the title to send her off in style. The story resolves Sara's return to New York and her relationship with Gleason and her attempt to find a suitable bearer to give the Artifact to. (W) Ron Marz, Matt Hawkins, Marc Silvestri, (A) Keu Cha, Stjepan Sejic, Abhishek Malsuni Brian Ching, Randy Green, Michael Turner, Isaac Goodhart, Nelson Blake II, Linda Sejic, Marc Silvestri 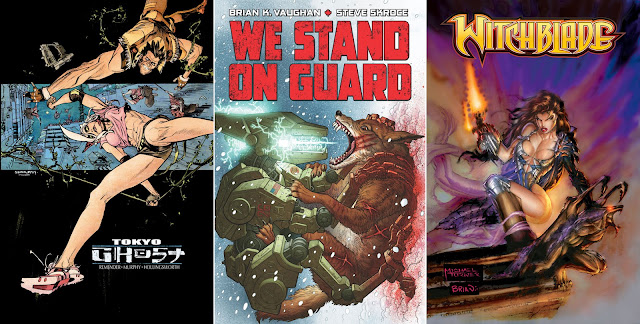 SOUNDS LIKE AWESOME:  BLACK MAGICK #1 The hammer falls this Halloween! Detective Rowan Black works robbery/homicide for the Portsmouth PD, but her greatest mystery is the truth about herself...both who she has been, and who she will become. Yet there are others in Rowan's world with very long memories, and the power that one person holds, another will always covet. Plus, each issue also features an all-new work of original fiction by Greg Rucka! A new gothic-noir ongoing series about legacy, destiny, redemption...and the price of magic. 40 pages,
Written by Greg Rucka, art and cover by Nicola Scott, cover by Jill Thompson.

What do you think?  Full Image Comics October 2015 solicits here.
Posted by IADW at 7:53 pm