When news drops of 45 new Marvel titles set to debut in October, it's going to make a splash. While the reveals has been covered here, by these jokers, and these oddballs, the full list is just a little too much for these two typing fingers, and let's be honest, despite what Hot Chocolate sings, not everyone's a winner baby.

So lets shake out the titles where aging or pregnant characters are the 'in season' plot twist (sorry Spider-Woman), and find the six most sinisterly crazy cool books named as part of the all-new marvel.

1) KARNAK (W) Warren Ellis (A) Gerardo Zaffino - Marvel wants the Inhumans to catch fire with fans, including adding Beast and the Human Torch to the franchise's core title. Surprisingly, they've just been upstaged by Karnak. You know, that green and white dude standing behind Black Bolt in the group shots. Matching Karnak's power to spot the weakness in anything with writer Warren Ellis will lead to a pretty thought provoking series - especially if it gives the underdog the new role of 'Watcher'. 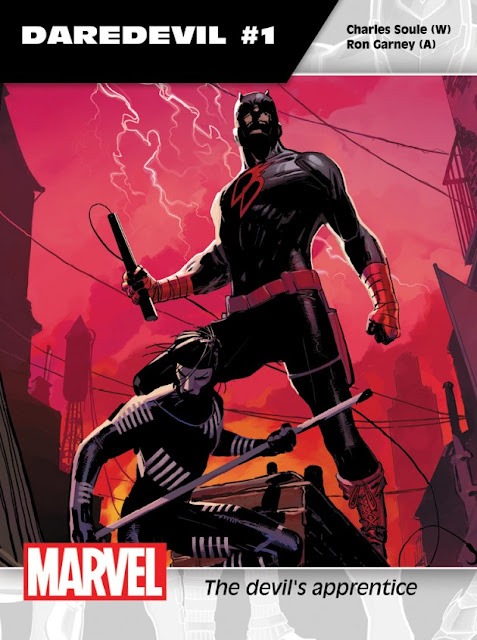 2) ULTIMATES (W) Al Ewing (A) Kenneth Rocafort - I really hope this 'galactic threat' team exists outside the Avengers. That said, this book sells on seeing Black Panther and Captain Marvel side by side (And by Cap, I mean Monica, not Carol, although she's there too). Add in Galactus and I'm a happy camper. Wait, is that the Invisible Woman too?

3) DAREDEVIL (W) Charles Soule (R) Ron Garney - Apparently that isn't Gambit, which is a shame, as that would have being a lethal combination. I'm one of those hardcore DD fans who like my hornhead dark, so I'm bucking the internet by saying I'm glad Mark Waid has stepped aside and practicing attorney, Charles Soule is taking this title back to noir.

4) ALL-NEW, ALL-DIFFERENT AVENGERS (W) Mark Waid (A) Mahmud Asrar, Adam Kubert - I'm not a fan of Miles or 'Kid Nova' and I've never read the new Ms. Marvel, but boy this line-up has me buzzing. My man, Vision, in amongst a diverse and inexperienced Avengers lineup is one thing, the all-star art team another, but what really tips the awesome scales is that the team is just seven heroes again. Boy, I'm glad that 'everyone and their dog is a member' era has stopped.

6) VISION (W) Tom King (A) Gabriel Walta - Yeah, this spot could've gone to Rich Rider possibly returning in Nova or the updated Invincible Iron Man, but I have waited AGES for a Vision series, so I want to give it it's due. While Viz is not in his classic design, and the book isn't exploring his de facto family; Quicksilver, the Scarlet Witch, Wonder Man, Wasp, Hank Pym, Ultron, etc, but rather a family he creates in suburbia, I really hope this is one rabbit the all-new Marvel manages to pull out of a hat, and keep him there.